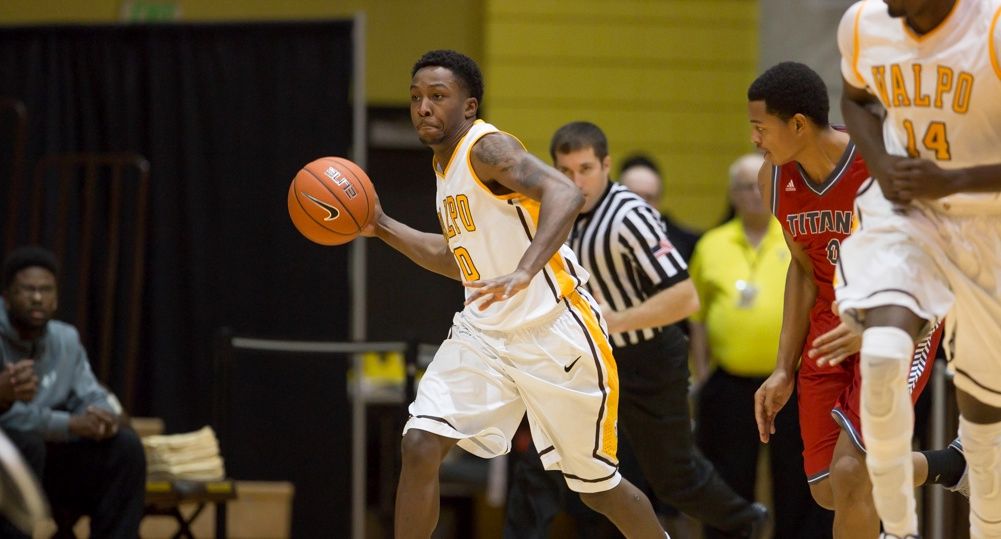 Valparaiso dominated the interior in its opening matchup of the Central Michigan Tournament against Arkansas-Pine Bluff on Friday from Mount Pleasant, Mich., using the advantage inside both offensively and on the glass to lead the way in a 59-46 Crusader victory.

Sophomore Alec Peters (Washington, Ill./Washington) led the way for the Crusaders on Friday, time and again finding soft spots in the middle of the Lions’ zone defense and converting.  Peters was 8-of-9 on attempts from inside the 3-point line en route to a game-high 19 points.  The sophomore also grabbed seven rebounds, five of which were on the offensive end – three of which he converted immediately into second-chance baskets.

For Fernandez, coming off a double-double two nights ago, he parlayed that effort into another strong outing against UAPB.  The senior went 3-of-4 from the floor –including a pair of dunks - and 5-of-6 from the foul line for 11 points, the first time in his career Fernandez has scored in double figures in consecutive games.  He also blocked five shots, matching the second-highest output of his career, and now has 84 career blocks, tied with Antti Nikkila for seventh-most in Crusader history.

The Crusaders led throughout, but could not put UAPB away in the opening 20 minutes after starting the game on a 9-2 run over the first 3:30, which included four points from Fernandez.  The Lions closed back within two points by scoring the next five points, and Valpo settled in to holding a single-digit lead for much of the period.

The Crusaders finally earned a double-digit edge on a triple from Peters with three minutes to go in the first half, and a 3-pointer by junior Keith Carter (Maywood, Ill./Proviso East [Saint Louis]) with about 45 seconds to go in the period made it 35-24 Valpo.  But UAPB’s Thaddeus Handley got inside for a layup on the Lions’ last possession of the half to make it 35-26 at halftime.

Out of the locker room, it was all Valpo to put the game away.  The Crusader defense forced four UAPB turnovers in the first five possessions of the second half, and offensively Valpo scored on four of its first five trips.  Peters opened the half with back-to-back baskets, junior Darien Walker (Chicago, Ill./Simeon [John A. Logan/Arizona Western]) knocked down a long two with the shot clock winding down, and Carter finished a fast break with a layup after a Tevonn Walker (Montreal, Quebec/Vanier College) steal as the quick 8-0 spurt out of the gate made it 43-26 Valpo with 17:23 to play.

It was academic from there, as the Crusaders pushed their lead up to 20 points on a Tevonn Walker triple with 15:21 remaining.  Valpo’s advantage peaked at 21 points a number of times, and only a 10-2 stretch from UAPB over the game’s final 5:45 made the final margin as close as it was.

Carter had a strong night at the point for the Crusaders, scoring seven points and handing out a career-best seven assists as well.  On the night, Valpo shot just 46.9% (23-of-49) from the field and just 26.3% (5-of-19) from behind the arc while committing 17 turnovers, but the Crusader defense limited Arkansas-Pine Bluff (1-3) to just 37.8% shooting and forced 17 turnovers as well.

Valparaiso (3-1) closes out action at the Central Michigan Tournament on Sunday morning against Maine at 8:30 a.m. CT.  The game can be heard live on the Valpo Sports Radio Network, with links for the live audio and stats available at ValpoAthletics.com.