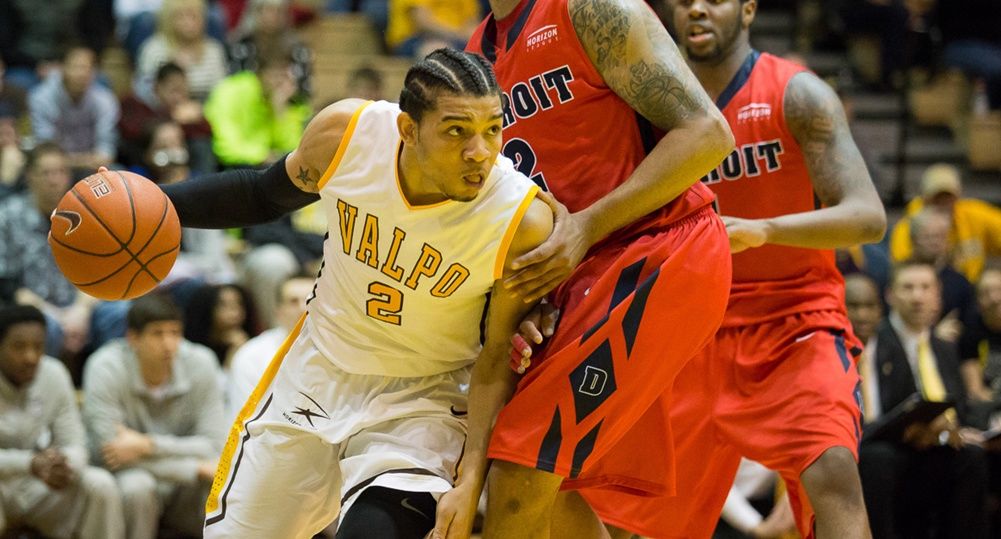 Trailing by four points early in the second half, the Valparaiso men’s basketball team went on an 11-0 run to re-take the lead for good, eventually downing Detroit 78-70 Wednesday night at the ARC.  The Crusaders remained in a tie for first place atop the Horizon League standings with the win and improved to 21-4 overall.

Valpo led by six at the half, but Detroit erased the entire lead in just 3:18, moving into a tie on a 3-pointer by Juwan Howard Jr.  Freshman Tevonn Walker (Montreal, Quebec/Vanier College) briefly restored the lead to the Crusaders with a driving layup, his third basket in the early stages of the second half, but Detroit would score the next six points.  A pair of free throws by Matthew Grant with 14:27 to play gave the Titans their largest lead at 41-37.

The Crusaders would hold the Titans scoreless for nearly four minutes, however, during the 11-0 run which gave them the lead for good.  A fast-break layup from junior Darien Walker (Chicago, Ill./Simeon [John A. Logan/Arizona Western]) off a steal and outlet by freshman David Skara (Zadar, Croatia/Ekonomska Skola Zadar) brought the Crusaders within one point, and Valpo took the lead with 13:02 to play on a putback by sophomore Alec Peters (Washington, Ill./Washington).

Darien Walker would close the run with six straight points, including another basket off the break, this time following a steal by Peters.  His triple off a feed from Skara with 10:57 to play capped the run and made it 48-41 Valpo.  Detroit’s Chris Jenkins knocked down a jumper to halt the Crusader spurt, but Walker answered on the other end, taking advantage of a second chance off his own miss to can another 3-pointer, pushing the lead to eight points at 51-43.

Walker’s miss on that possession, which came with 10:18 to play, would prove to be the Crusaders’ final miss from the floor, as Valpo connected on each of its last eight field goal attempts of the game en route to shooting 71.4% from the field in the second half.   Six different times over the game’s final 10 minutes, Detroit would cut Valpo’s edge to five points, but each time the Crusaders would respond right away.

Darien Walker, Tevonn Walker and sophomore Jubril Adekoya (Tinley Park, Ill./Andrew) each hit two free throws to answer over the next four minutes when Detroit moved to within five points, while Skara stepped up and hit a baseline jumper to answer a Titan basket as well.  Perhaps the biggest shot came after a pair of free throws from Chris Jenkins brought Detroit within 59-54 with 5:54 to play, as with the shot clock running down on the offensive end, junior E. Victor Nickerson (Atlanta, Ga./Norcross [Charlotte]) stepped up and hit just his sixth 3-pointer of the season to make it an eight-point lead.

One more time, the Titans would close to within five points, but this time Nickerson facilitated, hitting senior Vashil Fernandez (Kingston, Jamaica/Princeton Day [Md.] Academy) with an alley-oop with 4:25 to play.  An old-fashioned 3-point play from Nickerson with 3:30 to go pushed the lead to 67-58, and Detroit would get no closer than seven points the rest of the way.

A 3-pointer from Peters 5:44 into the game gave the Crusaders the lead in the first half, one which they would hold all the way until halftime.  Valpo limited Detroit to just 2-of-19 shooting inside the 3-point line in the first half, but the Titans knocked down seven 3-pointers to stay within striking distance.  An 8-0 run, capped by a tip-in from Skara, put the Crusaders ahead 28-19 with 2:34 to play in the half – their largest lead of the opening period – but Detroit scored six of the final nine points, including a deep 3-pointer from Howard with six seconds to play in the half, to close within 31-25 at the intermission.

Darien Walker led all players on Wednesday, pouring in a career-best 21 points in the winning effort.  Walker went 7-of-13 from the floor and hit three 3-pointers, while scoring 14 of his points in the second half.  Tevonn Walker nearly matched him, finishing 7-of-13 from the field and 5-of-6 from the foul line for 19 points.  Peters added 12 points on just seven field goal attempts, grabbed 10 rebounds for his third double-double of the season and also tied for team-high honors with four assists.  Fernandez blocked three shots, while Skara chipped in four assists and three steals.

Detroit (11-14, 4-6 Horizon) was led by 19 points from Howard, who was 4-of-5 from 3-point range.  Paris Bass added 14 points, while Jenkins scored 13 off the bench.  The Titans finished the game shooting just 37.9% from the field, as the Crusaders have now held their opponents under 40% shooting in all eight league wins to date.

Valparaiso (21-4, 8-2 Horizon) welcomes one of the other three teams with two losses in league action to the ARC on Sunday afternoon, as Oakland comes to town.  The game will tip off at 2 p.m. and will be televised nationally on the American Sports Network.  Locally, the game will be available on Comcast SportsNet Chicago Plus.  As always, all the action can be heard live on the Valpo Sports Network, with links for live audio, video and stats available at ValpoAthletics.com.