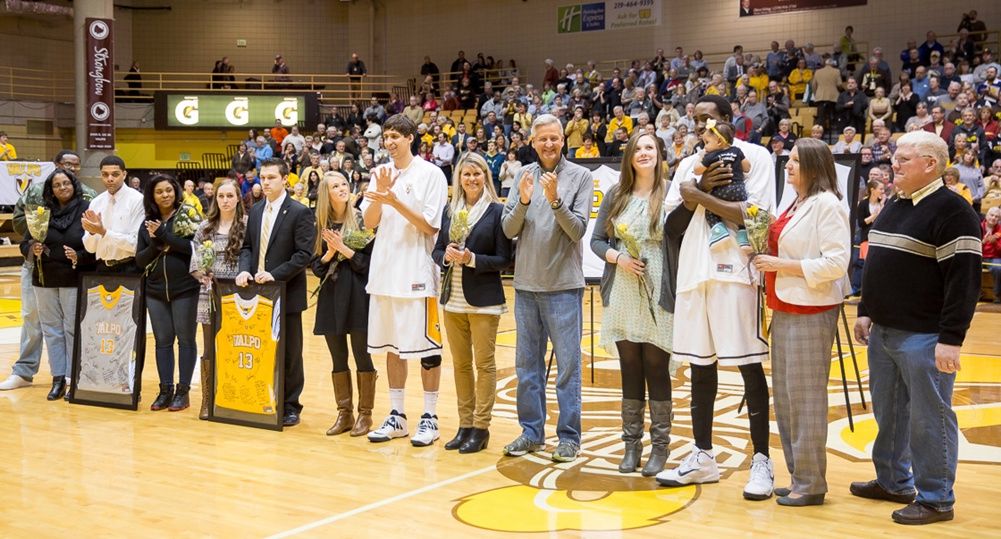 The Crusader senior class was honored prior to the game.
Wright State at Valparaiso | February 21, 2015
Related Links
Related Links

The Valparaiso men’s basketball team moved one step closer towards a Horizon League regular season title on Saturday evening in front of a packed house on Senior Night at the ARC, out-dueling Wright State in a hard-fought contest, 55-48.  With the win, the Crusaders are now 25-4 overall and own a 12-2 mark in league play, one game up on Cleveland State with two games left to play.

Saturday’s victory closed out the regular season home schedule for Valpo, with the Crusaders finishing 13-1 at home during the 2014-15 regular season, including a perfect 8-0 mark in Horizon League action.  The 13 home wins, with the possibility of more games to come at home, match the fourth-most home wins since the ARC opened.  Meanwhile, the 13-1 record – a .929 winning percentage – is the second-best home record since the ARC opened, trailing only a perfect 14-0 home record in 1994-95.

Meanwhile, Valpo improved to 21-2 over the last 23 seasons when celebrating Senior Night.  This year, Crusader senior players David Chadwick (Charlotte, N.C./Hargrave Military Academy [Rice]) and Vashil Fernandez (Kingston, Jamaica/Princeton Day [Md.] Academy), along with team managers Darryl Jackson and Austin Earley, were honored prior to the game and addressed the crowd following the contest.  Chadwick and Fernandez both earned spots in the starting lineup as well.

Leading the way Saturday was sophomore Alec Peters (Washington, Ill./Washington), who continued his stellar campaign with his fifth double-double of the season and his third over the Crusaders’ last five games.  Peters finished the night with a game-high 17 points and also led all players with 10 rebounds.  Meanwhile, junior Darien Walker (Chicago, Ill./Simeon [John A. Logan/Arizona Western]) came off the bench for the first time in league play and scored in double figures for the fifth time in the last six games, tallying 14 points on 5-of-10 shooting and adding three rebounds and three assists.

The rugged contest saw the lead change hands seven times in the first half, with neither side ever earning more than a four-point advantage.  A short jumper in the paint from Fernandez gave Valpo a 23-21 lead with 2:16 to play in the half, but Chrishawn Hopkins responded with a 3-pointer 31 seconds later for Wright State – a basket which would prove to be the final one of the period, as the Raiders led the Crusaders 24-23 at the half.

Wright State scored on each of its first two possessions of the second half, extending the lead to 28-23 – the largest for either side to that juncture of the game.  The Raiders would hold a lead for the first five minutes of the half, but the game would turn following two free throws from Hopkins with 16:54 to play, which gave WSU a 32-29 lead.

Head coach Bryce Drew switched to a zone defense on Wright State’s next offensive possession, and the move would stymie the Raiders’ offense.  Over the next seven minutes, WSU had nine possessions and went 0-of-7 from the field, including five misses from 3-point range, and turned the ball over twice as well.

The defensive effort allowed the Crusaders to go on a 14-0 run to take the lead for good.  Walker started the run with a layup, and then Peters converted a basket on the fast break to put Valpo in front.  Walker ended up with seven of Valpo’s 14 points during the run, while junior Keith Carter (Maywood, Ill./Proviso East [Saint Louis]) had five as well, including a 3-pointer with 10:47 to play which made it 43-32 Crusaders.

Valpo would go almost as cold as Wright State, however, scoring just three points over a stretch of nearly seven minutes as the Raiders closed back to within four points.  As the clock ticked under four minutes, the Crusaders had the ball out of bounds under the basket with just four seconds remaining on the shot clock.  Walker inbounded to the top of the key, where Peters was just outside the 3-point arc.  The sophomore hesitated slightly before launching a covered-up 3-pointer, one which found nothing but net.  The triple extended Valpo’s lead to 49-42 and jump-started a 9-0 Crusader spurt, as the Raiders would get no closer the rest of the way.

Carter added nine points to the Crusader offensive effort in 19 minutes off the bench in his second game back from injury, chipping in a pair of assists as well.  Valpo out-rebounded Wright State (11-17, 3-11 Horizon) by a 37-25 margin – the Crusaders’ 13th time out-rebounding their opponent by double figures this season.

The Raiders got 11 points apiece from Hopkins and Grant Benzinger to lead the way, while Michael Karena added 10 points and seven rebounds as well.  Valpo limited WSU to 39.2% shooting, including just a 1-of-14 clip from behind the 3-point line.

Valparaiso (25-4, 12-2 Horizon) has a two-game road trip looming next week, starting off Wednesday evening at Detroit.  The game against the Titans will tip at 6 p.m. CT, and as always, all the action can be heard live on the Valpo Sports Network and seen live on ESPN3.com.  Links for the live coverage will be available at ValpoAthletics.com.