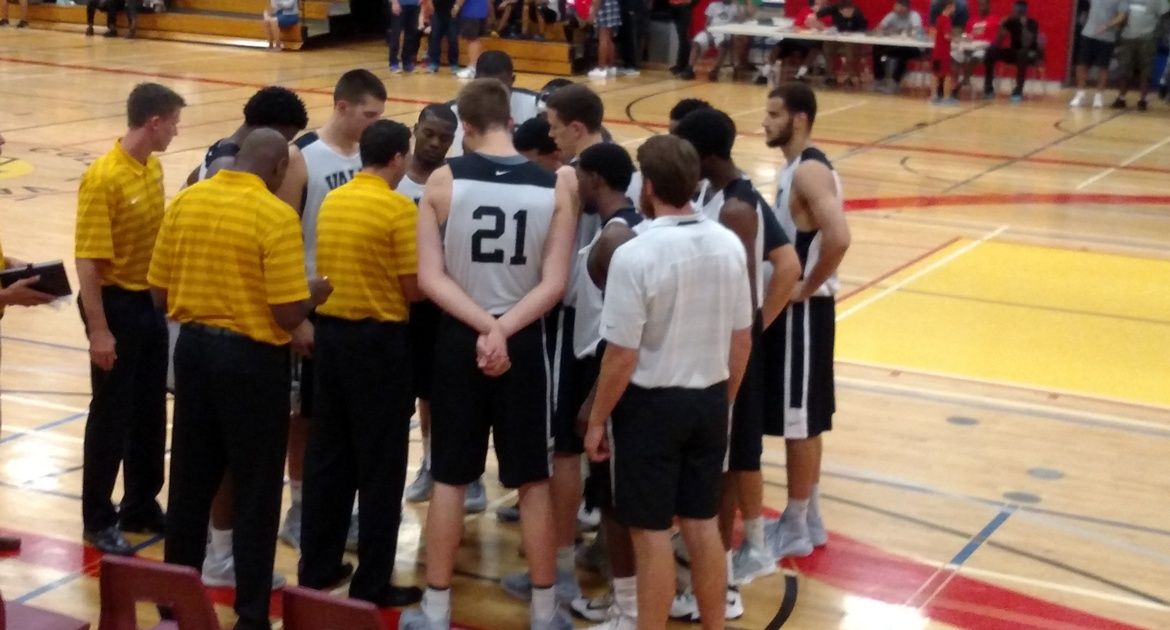 The Crusaders huddle up before their first game of the day.

The Valparaiso men’s basketball team ended Sunday with a pair of victories in Montreal to open play on its Canada trip, rallying for a 67-66 win over the Montreal All-Stars at Vanier College in the early afternoon before pulling away for an 85-60 win over Brookwood Elite at College Jean-de-Brebeuf in the evening.

The Crusaders opened play versus the Montreal All-Stars, a team comprised of a number of professional players – highlighted by the inclusion of Kris Joseph, a former All-Big East selection at Syracuse currently playing overseas in France. Playing by FIBA rules, which include four 10-minute quarters and a 24-second shot clock, Valpo got off to an 18-17 lead after the first quarter. But the Crusaders went cold in the second quarter and trailed going into the half, 35-27.

The Crusaders still trailed by nine points late in the third quarter before a pair of plays helped kick-start a big run which gave Valpo the lead for good. With less than a minute to play in the quarter, Tevonn Walker (Montreal, Quebec/Vanier College) drove for a one-handed dunk, followed on the next trip by a three-point play from Darien Walker (Chicago, Ill./Simeon [John A. Logan/Arizona Western]) to cut the All-Stars’ lead to 46-42 with 10 minutes to go.

The run would continue into the fourth quarter, as the Valpo defense locked down and held the All-Stars scoreless for a span of 4:30. Tevonn Walker started things off in the final quarter with a driving layup, followed by a triple from David Skara (Zadar, Croatia/Ekonomska Skola Zadar) which put the Crusaders ahead for the first time in the second half. Skara later drove the lane and threw down an emphatic two-handed slam, and a triple by Darien Walker capped the 15-0 run and gave Valpo a 52-46 edge with 6:30 to go.

A two-handed dunk over a defender by Shane Hammink (Millingen aan de Rijn, Netherlands/Oakley College [LSU]) extended Valpo’s edge to 61-53 with 2:45 to play. The All-Stars would rally, and had a chance to take the lead in the final seconds, but Tevonn Walker forced a miss from deep by Joseph as the Crusaders held on for the one-point win.

Skara paced Valpo in the day’s opener, scoring 15 points – 13 of which came in the second half. Darien Walker added 12 points, while Hammink chipped in 11 points in his first game in a Valpo uniform. The game marked the return of Tevonn Walker and Max Joseph (Montreal, Quebec/Vanier College) to their alma mater’s home court.

Joseph and Walker then would face off against their former AAU program in the nightcap, as they took the court against Brookwood Elite. Valpo took the lead for good midway through the first quarter and led by seven (19-12) at the end of one period and five (35-30) at halftime. The lead was eight points (51-43) following the third quarter, and the Crusaders would then pull away with an offensive outburst in the final 10 minutes, out-scoring Brookwood Elite 34-17 in that span to close the day.

Alec Peters (Washington, Ill./Washington) paced the Crusaders in the day’s second game with 16 points, 10 of which came in the final quarter. Skara repeated his performance from the opener, scoring 15 more points, while Hammink had his second consecutive 11-point game. Jubril Adekoya (Tinley Park, Ill./Andrew) rounded out the quartet of Valpo players in double figures, scoring 10 points, including six in the first few minutes of the third period.

Valparaiso returns to the court Tuesday evening for its final game in Montreal, facing off against McGill University.