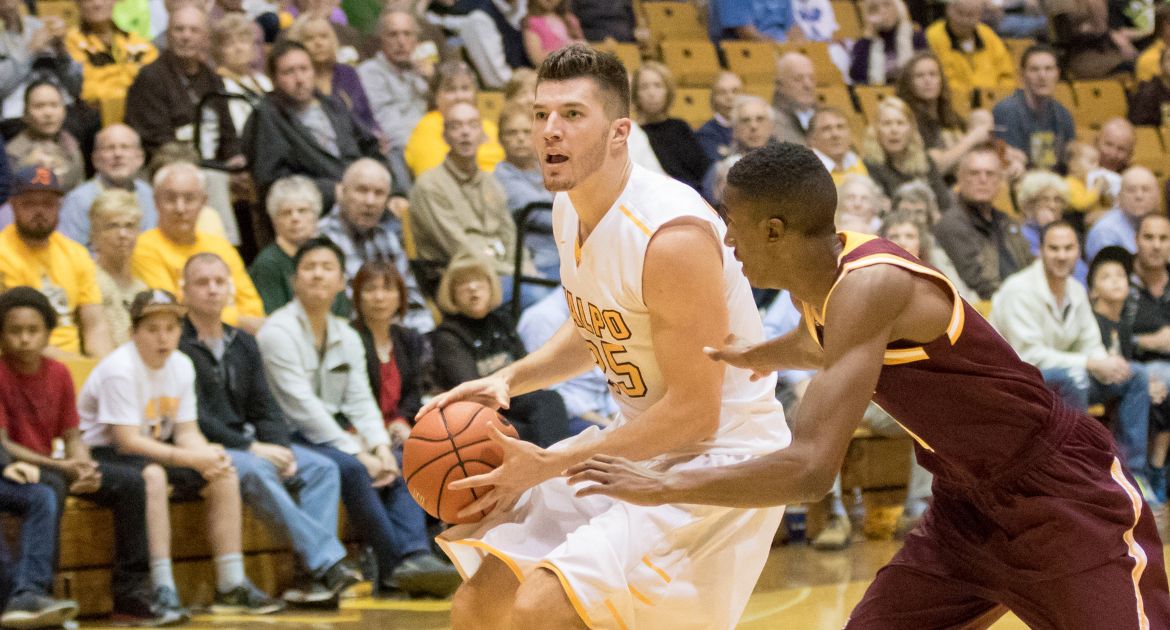 Valparaiso University junior forward Alec Peters (Washington, Ill./Washington) not only easily set a pair of new career highs, he also matched the program’s modern era single-game scoring record with 39 points in leading Valpo to a 92-74 victory at Detroit Sunday afternoon in Horizon League play. With the win, the Crusaders swept the road trip through Michigan and ended the weekend atop the Horizon League standings.

Peters scored 25 of his points in the first half to help stake Valpo to a 21-point halftime lead, and then scored his final 14 points in the last nine minutes as the Crusaders held off a rally from the Titans. The junior ended the game 4-of-10 from 3-point range, 8-of-10 from inside the arc and a perfect 11-of-11 from the free throw line for his 39 points, matching Brandon Wood’s output at Georgia Southern in November of 2009 for the best single-game scoring performance by a Crusader in the modern era.

In addition, Peters’ 11-of-11 performance from the foul line matched the best in nearly two decades by a Crusader, as it marked the third time a Valpo player has gone 11-of-11 from the stripe since Jamie Sykes went 13-of-13 from the foul line at Northeastern Illinois in 1998. Meanwhile, the junior hit the glass on Sunday as well, setting a new career high in that category as well with 14 rebounds – five of which came on the offensive end, and three of which resulted in tip-ins for baskets.

Peters got plenty of help offensively Sunday in the form of sophomore guard Tevonn Walker (Montreal, Quebec/Vanier College). Walker, coming off a 24-point performance Friday at Oakland, nearly matched that effort against the Titans, finishing with 21 points on 6-of-14 from the floor and 8-of-10 from the foul line. Walker became the first Crusader this season to score 20 or more points in back-to-back games.

Valpo got out to a fast start Sunday, taking a 12-6 lead less than five minutes into the game as Peters scored 10 early points and senior Keith Carter (Maywood, Ill./Proviso East [Saint Louis]) assisted on each of the Crusaders’ first five field goals. Peters then hit the glass hard offensively, tipping in three Crusader misses for baskets over the next five minutes as Valpo pushed the lead out to 22-8 and forced a Detroit timeout at the midway point of the half.

The run continued out of the timeout, with the lead reaching 20 for the first time at 33-13 with 6:34 to go in the half on a pair of Carter free throws. The lead reached its apex with 2:44 to play in the half as back-to-back layups from sophomore David Skara (Zadar, Croatia/Ekonomska Skola Zadar) made it a 46-19 game. Detroit would end the half on a 10-4 run, however, to cut the lead to 50-29 at the break as Peters finished the first half with 25 points – the last coming on a pair of free throws with 1:25 to go in the period.

Detroit had another run in it out of the locker room, scoring on 13 of 17 possessions starting with a pair of Chris Jenkins free throws with 18:16 to play. Meanwhile, the Crusaders would score just 14 points over the first 10 minutes of the half, allowing the Titans to rally and make it a ballgame. Seven straight points from Anton Wilson moved the Titans to within single digits for the first time in the second half, as Valpo’s lead was sliced to 64-56 with 9:38 remaining.

The teams started to trade points, as free throws from Peters and a dunk on a drive from Skara were offset by five more points from Wilson as Detroit was within 68-61 with 7:25 to play. But Peters stepped up, posting up for a layup, drawing an offensive foul on the defensive end and then using a shot fake to get his man in the air and earning three free throws. All three of them were perfect from the junior, pushing the advantage to 73-61 at the 6:18 mark.

Offensive rebounding then led to the best of both worlds for the Crusaders as they put the game away. Leading by 10 with 5:37 to play, Valpo ran 55 seconds off the clock thanks to offensive rebounds from senior Vashil Fernandez (Kingston, Jamaica/Princeton Day [Md.] Academy) and Skara, and got a driving basket from Walker to make it a 12-point game. Two possessions later, the Crusaders again killed 55 seconds of game time thanks to an offensive rebound by Walker, eventually leading to a 25-foot 3-pointer from Peters that hit nothing but net on its way down, pushing the lead to 80-65 with 2:54 to play. The result was academic from there, and Peters tied Wood’s modern-era scoring record with four free throws with 42 seconds to play before exiting the game.

Skara joined Peters and Walker in double figures with a solid 10-point performance, going 4-of-6 from the field. Valpo wasn’t sharp from 3-point range for the first time in six games Sunday, going just 7-of-28 from deep, but made up for it by going 21-of-37 from inside the arc and 29-of-33 from the foul line. Junior Jubril Adekoya (Tinley Park, Ill./Andrew) pulled down eight rebounds and Fernandez seven to go with Peters’ 14 to lead the way as Valpo out-rebounded Detroit 45-37. Carter ended the game with seven assists, while Fernandez blocked three shots.

Wilson led Detroit (9-6, 3-1 Horizon) with 23 points as he went 5-of-7 from the field and 9-of-9 from the foul line. Paris Bass added 16 points off the bench, but was just 5-of-18 from the floor and also committed four turnovers. The Crusaders limited the Titans to 39% shooting overall despite the fact they were 7-of-13 from the 3-point line.

Valparaiso (13-3, 3-0 Horizon) puts its perfect league record and its 20-game home winning streak on the line Thursday evening as the Crusaders host Milwaukee at the ARC at 7 p.m. The game can be seen live on ESPN3.com and heard live on WVUR (95.1 FM, Valparaiso), with links for the live video, audio and stats available via ValpoAthletics.com.