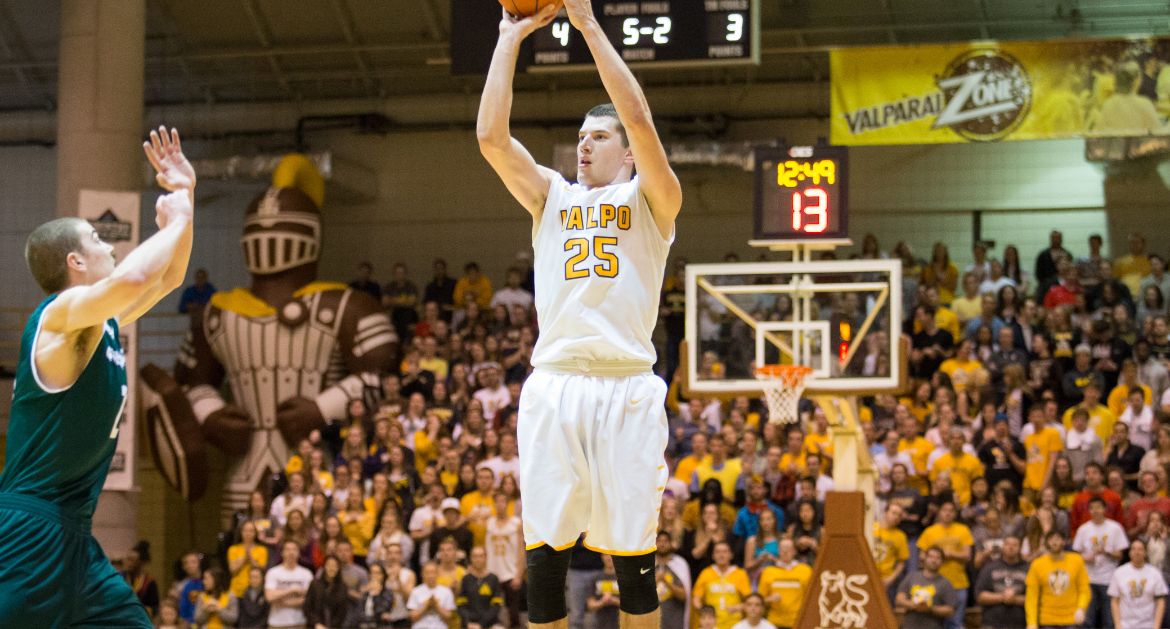 The Valparaiso University men’s basketball team continued its roll through the opening portion of Horizon League play, as both junior Alec Peters (Washington, Ill./Washington) and senior Vashil Fernandez (Kingston, Jamaica/Princeton Day [Md.] Academy) posted double-doubles in an 85-70 victory over Green Bay in front of a near-capacity crowd at the ARC Saturday. The win marked the 500th by a member of the Drew family as head coach of the Crusaders.

Saturday’s victory was the 15th of the season for the Crusaders, giving head coach Bryce Drew 109 career victories at the helm of the Valpo program. Combined with 371 wins from Homer Drew and 20 wins by Scott Drew, the family has combined to lead Valpo to 500 victories since the start of the 1988-89 season.

Leading the way for Valpo Saturday was the junior Peters, who bounced back from a rough outing last time out to post his seventh double-double of the season. Peters finished the game 6-of-10 from the field, including 3-of-5 from the 3-point line, for a team-best 21 points, and paced all players with 13 rebounds as well.

Meanwhile, Fernandez contributed his always-stellar rebounding and defense while continuing to showcase his offensive prowess as well. For the second straight game, the senior went 6-of-7 from the field, this time finishing with 13 points as he rebounded and laid in his only miss from the floor. Fernandez pulled down 11 rebounds, combining with Peters to spearhead an effort on the glass which resulted in a 52-35 advantage on the boards. He also finished with five blocked shots, his fourth game of the season with at least four rejections and moving him within 13 of Valpo’s career record.

The first half went back and forth Saturday, featuring five ties and seven lead changes. The Crusaders struggled from outside in the opening half, but scored 22 points in the paint over the first 20 minutes. Valpo led by as many as seven in the first half, and went into the locker room up 33-28 thanks in large part to 15 first-half points by Peters.

Green Bay scored the first basket of the second half to pull within three points, and while the Crusaders made a couple runs to try to pull away, the Phoenix would rally to stay within striking distance. A short-range jumper from Fernandez gave Valpo a 44-33 edge at the 15:11 mark, but Green Bay scored six of the next seven points to close back to within six. Then, after Peters and senior Darien Walker (Chicago, Ill./Simeon [John A. Logan/Arizona Western]) hit back-to-back 3-pointers to extend the lead to 51-39 with 11:57 remaining, the Phoenix went on a 10-2 run over the next two-plus minutes to move within 53-49.

But that one huge run was still looming, and the Crusaders gave the crowd plenty to cheer about over the next four minutes, out-scoring Green Bay 14-2 over the span to take control. Sophomore David Skara (Zadar, Croatia/Ekonomska Skola Zadar) got the run going with a 3-point play and tallied seven points during the run, while senior Keith Carter (Maywood, Ill./Proviso East [Saint Louis]) scored five points over three trips and added an assist on a Fernandez dunk as well.

Leading 67-51 with 5:35 to go, the Crusaders held off a Green Bay push that cut the lead to 70-61 inside of four minutes, scoring eight straight points to put the game away. Junior Shane Hammink (Millingen aan de Rijn, Netherlands/Oakley College [LSU]) hit a pair of free throws to start the run and Carter added three points as well. The coup de grâce came with 1:55 to play, as Carter found junior Jubril Adekoya (Tinley Park, Ill./Andrew) in the corner with the shot clock winding down for a 3-pointer which pushed the lead back to 17 points.

Four Valpo players ended the night in double figures, as both Hammink (12 points) and Walker (10 points) came off the bench with double-digit scoring efforts as well. In fact, Walker narrowly missed being the third Crusader with a double-double, as he grabbed nine rebounds. Valpo ended the night hitting 27-of-56 (48.2%) from the floor and got to the foul line 36 times, knocking down 26 free throws.

Green Bay (11-7, 4-2 Horizon) was led by 22 points apiece from Carrington Love and Charles Cooper, while Jordan Fouse added 14 points as well. One of the best field goal percentage defenses in the nation, the Crusaders limited the Phoenix to just 32.4% shooting from the field and just 7-of-24 (29.2%) from beyond the 3-point line.

Valparaiso (15-3, 5-0 Horizon) faces a quick turnaround to its third Horizon League game in five days, as the Crusaders travel to Youngstown State for a Monday night game. Tip is slated for 6 p.m. CT, and all the action can be seen live on ESPN3.com. As always, you can listen as well on WVUR (95.1 FM, Valparaiso), with links for the live video, audio and stats available via ValpoAthletics.com.