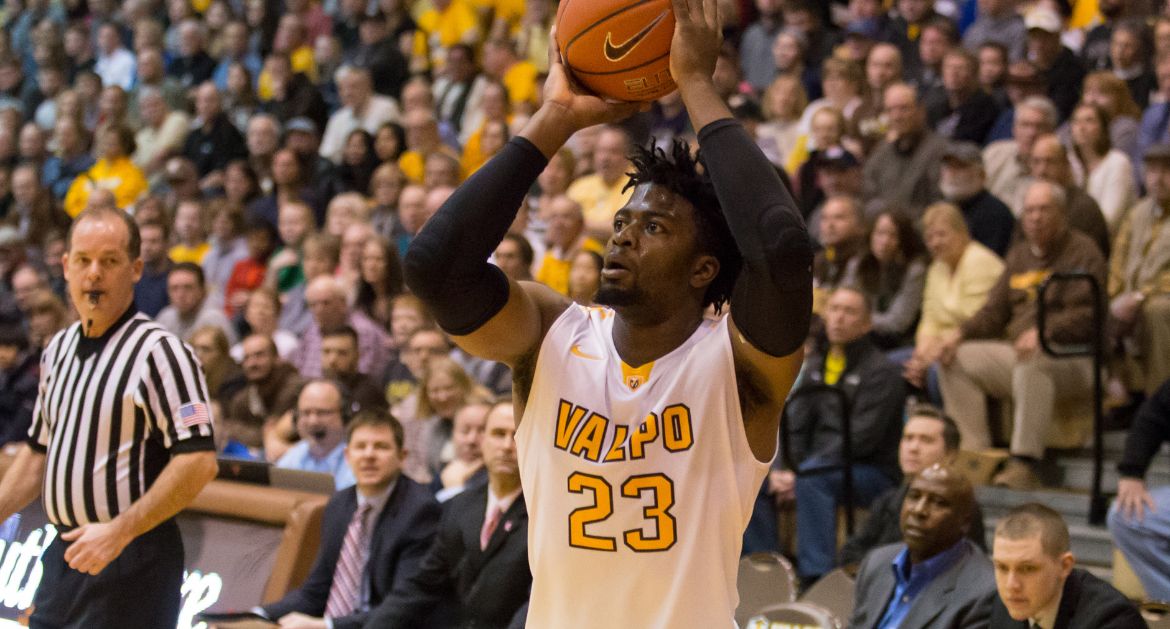 Jubril Adekoya squares up for one of his three 3-pointers Saturday.
Youngstown State at Valparaiso | January 30, 2016
Related Links
Related Links

The Valparaiso University men’s basketball team continued to take care of business at the ARC on Saturday evening, as the Crusaders scored the game’s first seven points and never looked back, downing Youngstown State 97-68 to remain atop the Horizon League with a 9-1 record in league action. The win was the Crusaders’ 24th straight at the ARC.

After a couple recent slow starts, Valpo came out of the gate ready to go on Saturday night, spearheaded by the early play of senior Keith Carter (Maywood, Ill./Proviso East [Saint Louis]). Carter knocked down a 3-pointer on Valpo’s second possession, found fellow senior Vashil Fernandez (Kingston, Jamaica/Princeton Day [Md.] Academy) for a dunk on the fast break and then completed a spectacular coast-to-coast move as the Crusaders led 7-0 just 2:27 into the game.

YSU would score the next five points, but a 12-3 spurt by the Crusaders pushed the lead into double figures less than eight minutes into the game. Four different Valpo players scored during the run, capped by first an old-fashioned 3-point play and then a 3-pointer from junior Jubril Adekoya (Tinley Park, Ill./Andrew), as the Crusaders led 19-8.

A YSU basket briefly suppressed the momentum, but the Crusaders quickly responded with another 11-2 run. Five different players found the basket during this stretch, with a putback basket by Fernandez with eight minutes to go in the half pushing the lead to 30-12. The advantage surpassed 20 points on a 3-point play by Carter at the 6:11 mark and reached its peak at 50-25 on a 3-point play from junior Alec Peters (Washington, Ill./Washington) with 3:11 to go in the half. The Crusaders eventually went into the locker room leading 54-32.

Much like Thursday’s win over Cleveland State, Valpo surrendered the first basket of the second half but answered with a run to salt away the game. This time, it was an 8-0 spurt, including a 3-point play by sophomore David Skara (Zadar, Croatia/Ekonomska Skola Zadar) and three points from sophomore Tevonn Walker (Montreal, Quebec/Vanier College) and capped by an offensive rebound and layup by Peters to make it 62-34. The lead would not fall under 22 points the rest of the way.

The balanced Valpo effort on Saturday night saw no player play more than 24 minutes and four Crusaders finish in double figures. Peters needed just 21 minutes to score 18 points on 7-of-10 shooting and added seven rebounds as well. Adekoya exploded off the bench for 16 points, including a career-high three 3-pointers.

Carter scored 13 points in his 19 minutes of action, while Fernandez posted yet another double-double with 11 points and a game-best 13 rebounds. Fernandez also blocked two shots, leaving him just one shy of Valpo’s career record. The Crusaders shot 54.2% from the floor for the game and were 9-of-18 from the 3-point stripe. Valpo’s dominance on the glass continued as well, as the Crusaders out-rebounded YSU 47-26 and converted 10 offensive rebounds into 15 second-chance points. Valpo also owned a 48-16 advantage in points in the paint.

Valparaiso (19-4, 9-1 Horizon) has a week before its next game, as the Crusaders will make the short trip across the state line to face off against UIC next Saturday, Feb. 6 at 3 p.m. As always, the game can be heard live on WVUR (95.1 FM, Valparaiso) and will be televised on Comcast SportsNet Chicago. Links for the live audio, video and stats will be available at ValpoAthletics.com.