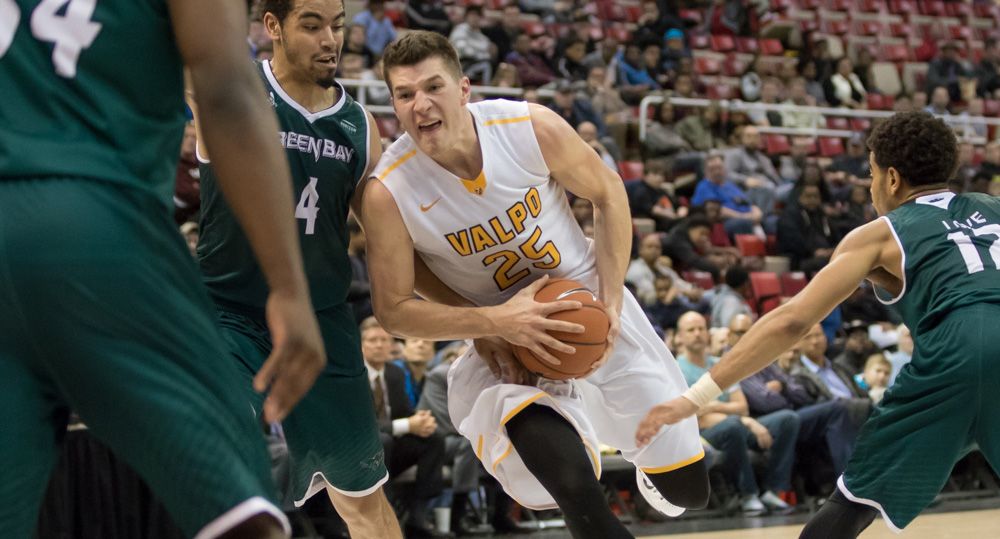 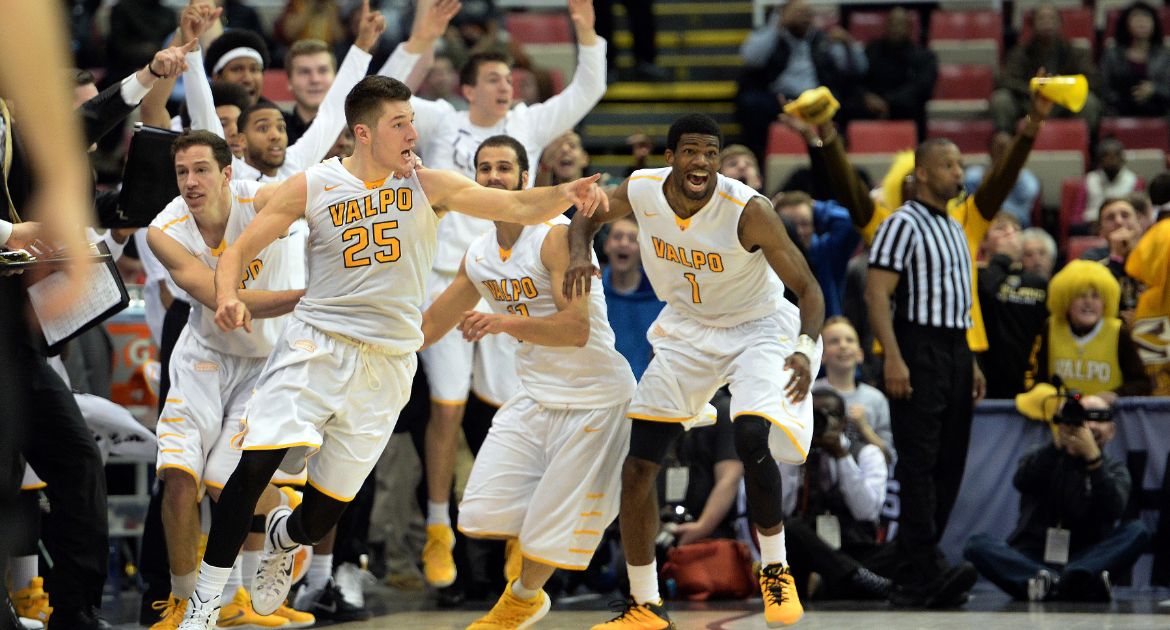 It seemed like destiny would again be on the side of Valparaiso Monday evening in its Horizon League Men’s Basketball Championship semifinal game versus Green Bay in Detroit, Mich., as Jubril Adekoya (Tinley Park, Ill./Andrew) hit Alec Peters (Washington, Ill./Washington) with a 80-foot baseball pass for a game-tying layup with 0.5 seconds to play in regulation. But the Phoenix would prevail in overtime, out-scoring Valpo 20-13 in the extra session as the Crusaders fell 99-92. The loss puts the Crusaders at 26-6 overall, waiting for Sunday’s NCAA Tournament selection show.

Valpo enters postseason play with a resume that includes not only the 26-6 record, but 12 true road wins – tied for second-most in the nation. The Crusaders currently boast an non-league RPI of 20 and a non-league strength of schedule of 52, as Valpo played seven games against top-110 RPI teams in the non-league slate – posting a 5-2 record in those games.

Valpo played without the services Monday of sophomore guard Tevonn Walker (Montreal, Quebec/Vanier College), who averages nearly 10 points per game and is one of the key perimeter defenders for the Crusaders, due to an injury suffered in the regular season finale. In addition, sophomore David Skara (Zadar, Croatia/Ekonomska Skola Zadar) returned and played 21 minutes despite not practicing full speed for over two weeks due to injury.

Things looked dire for the Crusaders, as they trailed for the final 15-plus minutes of the second half, including by five points at 76-71 with 1:11 to play and Green Bay going to the line for two free throws. Carrington Love split the pair to make it a six-point game, but 11 seconds later, Keith Carter (Maywood, Ill./Proviso East) knocked down a 3-pointer to make it 77-74. Then, following a split at the stripe by Charles Cooper, Peters connected on a triple to cut the lead to 78-77 with 38.8 seconds to play.

Valpo opted to play defense rather than foul on the next possession, forcing a miss by Jordan Fouse with 17 seconds remaining. The Crusaders came down looking for the lead, but Adekoya’s jumper rattled in and out as the clock ticked under eight seconds. A scramble for the rebound resulted in a jump ball with 3.0 seconds to go, with the possession arrow pointing Green Bay’s way.

The Phoenix inbounded and Peters fouled Cooper quickly, with 2.1 seconds showing on the clock Cooper missed the first free throw, but hit the second to make it 79-77. Adekoya took the ball out of bounds and unleashed a pass nearly the length of the court, clearing Fouse’s leap and finding the hands of Peters, who took it in for an uncontested layup with half a second remaining to send the game to overtime.

Overtime got off to a good start for the Crusaders, as Valpo forced a pair of misses on the Phoenix’s first possession and then got a pair of free throws from E. Victor Nickerson (Atlanta, Ga./Norcross) to make it 81-79 Valpo with 4:04 to play. But Green Bay went on a 12-0 run over the next three minutes, as Valpo committed four turnovers over the stretch – including a key illegal screen call as Peters was nailing a deep jumper.

Down by 10, the Crusaders still had fight, cutting the lead to five on multiple occasions. Peters hit a deep, covered-up 3-pointer at the 1:07 mark, and then knocked down three free throws 12 seconds later to cut the deficit to 92-87. Later, a free throw by Nickerson with 30 seconds left made it a 95-90 game. But the Crusaders were never able to get any closer than that in the extra period.

Valpo overcame a rough shooting first half in its first game on the floor at Joe Louis Arena, grabbing 12 offensive rebounds, to be within three points at the half, 35-32. The Crusaders would start the second period on a 9-2 run to go ahead 41-37, but Green Bay scored the next 11 points to pull ahead, where the Phoenix would stay until the last-second layup.

Peters led the way for Valpo on Monday, scoring above 30 points for the third time this year as he finished with 32 points, including a 13-of-14 effort at the foul line, and 12 rebounds. Carter finished with 15 points and five assists before fouling out late in regulation, while Nickerson, Shane Hammink (Millingen aan de Rijn, Netherlands/Oakley College [LSU]) and Skara all finished in double figures as well. Fouse led Green Bay (22-12) with 25 points, while Cooper scored 24 and Love finished with 23 points.

Valparaiso (26-6) will now wait to find out their next opponent on Sunday afternoon. The NCAA Tournament Selection Show will begin at 4:30 p.m. CT on Sunday. The Crusaders have already secured an automatic bid into the NIT, by virtue of their Horizon League regular season crown, should the NCAA Tournament Committee pass on Valpo.