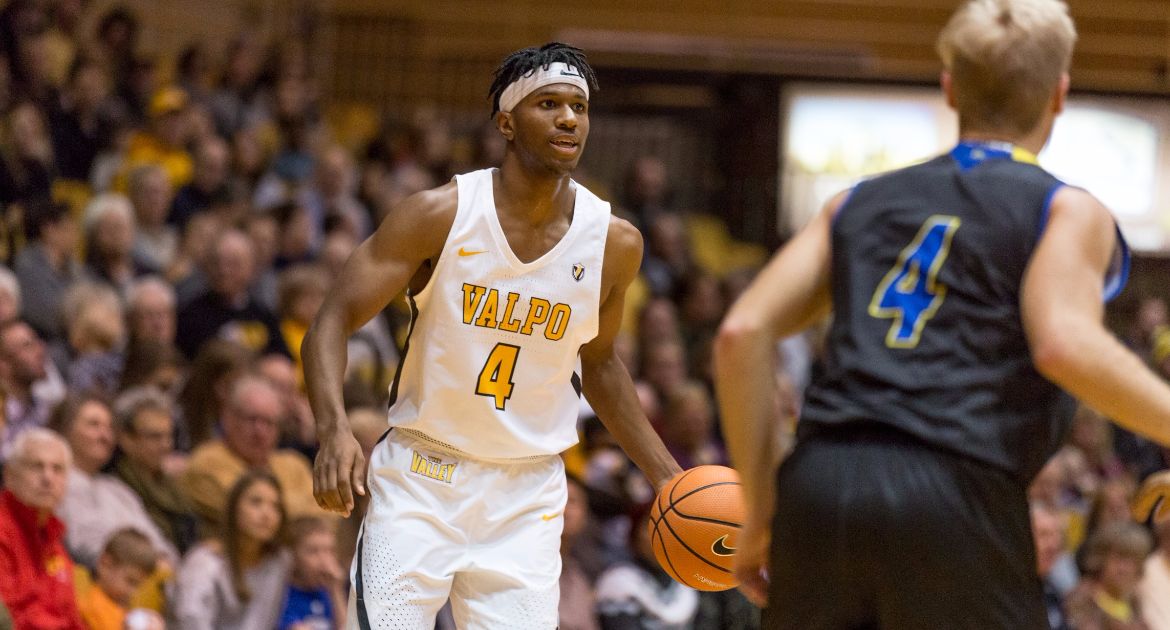 Next Up in Crusader Basketball: The Valparaiso University men’s basketball team looks for its second straight win to start the season on Monday evening as the Crusaders host Trinity Christian at the ARC. The men’s basketball program asks its fans to help Shed Light on Foster Care on Monday night, as any fan who brings a night light or a stuffed animal to donate to foster care children will receive free admission. Senior Tevonn Walker enters the game just one point away from reaching the 1,000-point milestone for his career.

Last Time Out: The Crusaders held North Park scoreless for over 10 minutes to start off the season opener Friday evening at the ARC en route to an 88-46 victory over the Vikings. The balanced team effort was led by 20 points off the bench from Micah Bradford, while Markus Golder contributed a 12-point, 10-rebound double-double in his Crusader debut.

Head Coach Matt Lottich: Matt Lottich (25-9) continued the Valparaiso University men’s basketball program’s run of success in his first season as head coach of the Crusaders, and is poised to keep the program at a high level as he enters his second season in charge in 2017-2018. In his first season at the helm, Lottich guided Valpo to its fifth Horizon League regular season championship in the last six years as he led the Crusaders to 24 wins and an at-large berth into the NIT.

Series Notes: This marks the third straight year the Crusaders and Trolls have met in regular season action. Valpo has won both previous meetings, but last year, Trinity Christian led by as many as 16 in the first half and was up nine at the half before the Crusaders rallied for an 89-75 victory. Alec Peters led the way with 36 points and 15 rebounds, while Shane Hammink contributed 18 points and 10 rebounds in the win.

@ValpoBasketball...
...and @ValleyHoops
- Valpo was selected to finish in sixth place in the MVC preseason poll, finishing just 12 points behind Southern Illinois for fifth place.
- The Crusaders have defeated MVC preseason favorite Missouri State in each of the last two seasons.
- Valpo has not finished worse in the final standings than its preseason projection in the last seven years.
- Senior Tevonn Walker represented the Crusaders among the preseason All-Conference honorees, earning Second Team accolades.

...looking back at last year
- The Crusaders are coming off of their third consecutive Horizon League regular season title and their fifth in the last six years, posting a 14-4 mark within league play and a 24-9 record overall.
- The regular season was highlighted by a win over #21 Rhode Island at the ARC - the program’s first win over a ranked opponent since 1998 - and wins in Las Vegas over Alabama and BYU to earn the MGM Grand Main Event title.
- Valpo earned an at-large bid into the Postseason NIT for the second time in program history, falling at Illinois in a first-round matchup. The NIT berth extended the Crusaders’ string of postseason appearances to seven straight seasons.
- Alec Peters was named an NABC Third Team All-American and an AP Honorable Mention All-American and claimed the Horizon League Player of the Year award.
- Peters closed out his career as the Crusaders’ all-time leading scorer and rebounder.
- Shane Hammink was a Second Team All-League selection, while Tevonn Walker was named to the league’s All-Defensive Team.

...notes from North Park
- Valpo started the game on a 15-0 run, as North Park didn’t score until 10:03 into the game. The Vikings went 0-for-13 from the field and committed eight turnovers over that stretch.
- North Park got no closer than 11 points the rest of the way.
- Three of Valpo’s five returnees who played matched or broke their career high for points - Micah Bradford (20), Derrik Smits (14) and John Kiser (8, tied).
- The Crusaders enjoyed significant advantages in points in the paint (42-8), points off turnovers (19-4) and fast-break points (22-0).

...in the exhibitions
- Valpo controlled Chicago State defensively in the special hurricane relief exhibition in Chicago, downing the Cougars 77-42.
- The Crusaders limited CSU to 24.1% shooting from the field in the victory and held the Cougars to just 15 second-half points.
- Tevonn Walker finished the game with a double-double, posting 15 points and 10 rebounds, while Bakari Evelyn added 12 points and Joe Burton chipped in 10 points.
- Valpo wowed the fans at the ARC in the first exhibition game, racing to a 117-69 victory over Robert Morris [Ill.], which was ranked #12 in the NAIA Division II preseason poll.
- The Crusaders’ bench scoring alone matched the Eagles’ entire offensive output (69 points), while Valpo also racked up 34 fast-break points.
- Seven different Valpo players scored in double figures in the win over RMU, led by 17 points apiece from Micah Bradford and Markus Golder.
- Golder threw down four dunks as the Crusaders racked up eight slams as a team.

...looking ahead
- Valpo will return to action with another home game on Monday evening, as the Crusaders host Trinity Christian at the ARC.
- A trip to Edwardsville, Ill. follows, as Valpo makes the trip for a Wednesday night showdown with SIUE.

Success in the Openers
- The Crusaders continued their recent success in season and home openers with Friday’s big win over North Park.
- Valpo has now won six consecutive season openers - all of which have come at home.
- The Crusaders also extended their winning streak in home openers to 13 straight years, 12 of which have come by double figures.

Looking For 2-0
- With a win on Monday, Valpo would start at least 2-0 for the fifth time in the last six seasons.
- Last year’s team got off to a 3-0 start to the season.
- The best start in that stretch came from the 2015-16 squad, which won each of its first five games.

Youth Shall Be Served
- With nine of the Crusaders’ 12 players this season being underclassmen, the freshmen and sophomores will undoubtedly combine for large percentages of the team’s output.
- In the season-opening win, the underclassmen recorded 71 of Valpo’s 88 points (80.7%), 41 of 46 rebounds (89.1%) and 154 of 200 minutes played (77%).

Doubling Up
- Redshirt sophomore Markus Golder made an immediate impact in his Crusader debut, recording 12 points and 10 rebounds off the bench in Valpo’s win over North Park.
- It was the first double-double by a Valpo player in a season opener since Urule Igbavboa registered 15 points and 15 rebounds in a win over Calumet to open the 2006 campaign.
- Golder’s double-double was the first by a player in his Crusader debut since Mohamed Kone opened the 2005 season with 15 points and 11 rebounds at IPFW.

Valpo in the Valley
- A new era begins this year for Valpo men’s basketball and the athletics department and University as a whole, as the 2017-18 year is Valpo’s first as a member of the Missouri Valley Conference.
- The Valley is renowned for its men’s basketball success on the national stage. Since the year 2000, The Valley has earned 33 bids to the NCAA Tournament – 18 automatic bids and 15 at-large berths – and has posted 27 tournament victories.
- Since 2010, 12 MVC programs in the NCAA Tournament have combined for 16 victories.
- The Crusaders are looking to carry over the success they’ve had in the past two-plus decades into The Valley.
- Over its last 13 years as a member of the Mid-Continent Conference (1994-2007), Valpo claimed nine regular season and eight tournament championships.
- Then, in a decade as a Horizon League member, the Crusaders won five regular season and two tournament titles.

What’s Back
- Six letterwinners return from last year’s 24-win squad, including one full-time starter in Tevonn Walker and a trio of part-time starters in Derrik Smits, Micah Bradford and Jaume Sorolla.
- In all, the Crusaders return 50.2% of minutes played, 46.3% of rebounding and 40.7% of scoring from last year’s team.

What’s New
- Six players will take the floor for the first time for the Crusaders this year.
- A pair of high-major transfers are eligible after sitting out last season due to NCAA transfer regulations. Joe Burton (Oklahoma State) has two seasons of eligibility remaining, while Bakari Evelyn (Nebraska) is entering his sophomore season of eligibility.
- A third transfer joins the Crusaders with three years remaining as well, as Markus Golder comes to Valpo from North Idaho College.
- The three transfers are joined by three true freshmen - Indiana H.S. products Mileek McMillan and Parker Hazen, and German import Marten Linssen.

Crusaders Sign Javon Freeman-Liberty
- One of the top prospects in the Class of 2018 in the state of Illinois, Javon Freeman-Liberty signed a National Letter of Intent during the early signing period and will join Valpo as a freshman for the 2018-19 season.
- Freeman-Liberty helped lead Whitney Young H.S. to the Illinois Class 4A state title last year as a junior, averaging 13.6 points, 5.2 rebounds and 2.1 assists per game.
- The 6’4” Chicago native is a consensus top-10 prospect in his class in Illinois and is ranked fifth overall in the state and 37th nationally among shooting guards by ESPN. He played his AAU basketball last summer for Meanstreets.

Non-Conference Success
- Valpo is looking to continue its recent string of successful non-conference campaigns.
- The Crusaders have entered conference play with at least 10 victories under their belt in four of the last five years, including a 10-3 mark in pre-conference action each of the last two seasons.
- Valpo owns a 52-19 (.729) record in pre-league action over the last five seasons.