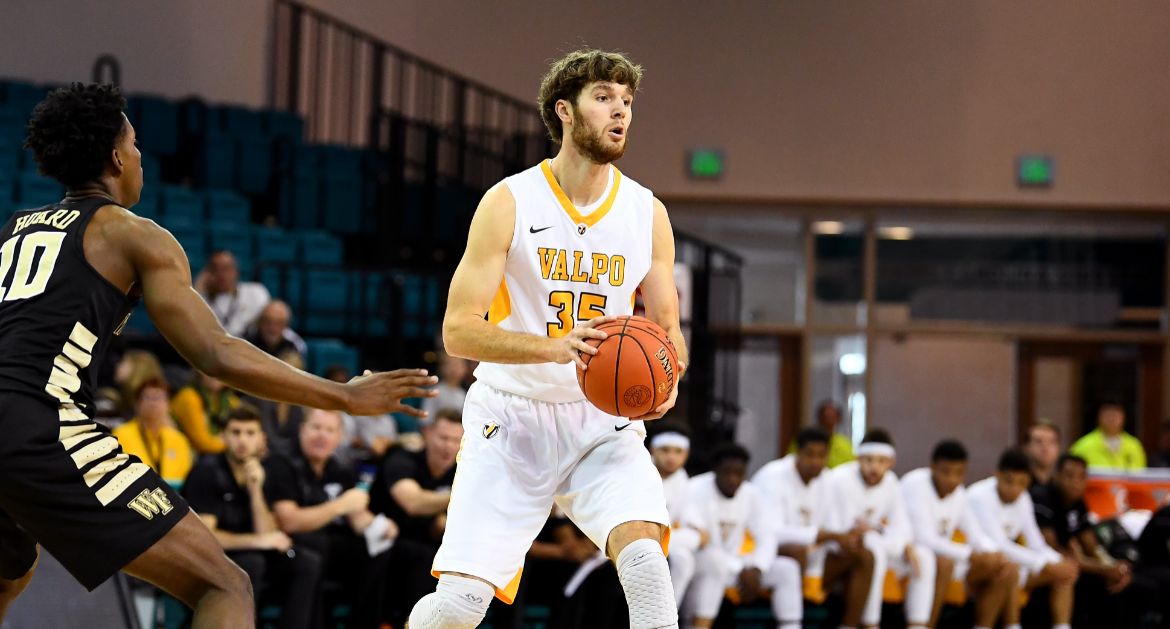 Next Up in Valpo Basketball: The Valparaiso University men’s basketball team returns home briefly for a Thanksgiving appetizer, as Valpo hosts SIUE on Wednesday evening

Last Time Out: Valpo closed out the Myrtle Beach Invitational on Sunday with a narrow 69-63 defeat against Wake Forest in the tournament’s fifth-place game. Derrik Smits led all players with a career-best 23 points and also pulled down a team-high seven rebounds.

Head Coach Matt Lottich: Matt Lottich (41-28) is in his sixth season overall at Valpo and third as head coach in 2018-19. Lottich led Valpo to 15 victories in his second season in charge in 2017-18 and guided the Crusaders through the move to the MVC, which ended the campaign ranked eighth nationally in conference RPI. In his first year as head coach, Lottich guided Valpo to its fifth Horizon League regular season championship in the last six years as he led the Crusaders to 24 wins and an at-large berth into the NIT.

Series Notes: This is the second meeting in the all-time series between SIUE and Valpo. Valpo won the first meeting last season in Edwardsville, 94-69, led by 22 points and four steals from Tevonn Walker and 14 points and seven assists from Bakari Evelyn.
@ValpoBasketball...
...and @ValleyHoops
- Valpo was selected to finish in seventh place in the MVC preseason poll with 173 points.
- Valpo has finished worse in the final standings than its preseason projection just once in the last eight years.

...at the Myrtle Beach Invitational
- Valpo went 1-2 in Myrtle Beach, finishing the tournament in sixth place.
- Valpo fell 83-71 to Western Kentucky, beat Monmouth 64-53, and dropped a 69-63 decision to Wake Forest.
- Javon Freeman scored in double figures for Valpo in all three games, while Deion Lavender handed out at least five assists in all three contests.
- Derrik Smits had Valpo’s high game of the tournament with a career-best 23 points against Wake Forest - 19 of which came in the second half.
- Smits and Ryan Fazekas shared high scoring honors for the tournament, both averaging 11.3 ppg, while Smits also grabbed a team-high 5.3 rebounds per game.

...against Concordia University Chicago
- Valpo broke the game open with a 24-4 run over a six-minute span, pushing its lead to 35-11 with 8:48 to play in the first half, and then scored the final seven points of the first half to go into the locker room leading 63-31.
- The Cougars came out stronger than Valpo to start the second half, out-scoring Valpo 19-7 over the first 7:45 of the period to move within 72-52.
- With the lead at 77-56 with 11 minutes to play, Valpo put the game away with a 16-0 run which took just over two minutes.
- The game was the first since the two squads met in the opening round of the 1969 NCAA Tournament in Hilltop Gym. In fact, prior to last Tuesday, the last two meetings between the two teams both came in postseason play.
- The effort featured strong performances up and down the roster, as all 10 active players for Valpo played between 11 and 25 minutes. All 10 scored at least three points and all grabbed at least three rebounds as well.

...looking ahead
- Valpo heads right back out on the road, taking on West Virginia in a non-bracketed game as part of the Myrtle Beach Invitational on Saturday afternoon.
- The team then flies out to Las Vegas for its MWC/MVC Challenge game against UNLV on Nov. 28.

@SIUEMBB
- The Cougars enter the ARC Wednesday night with an 0-2 record on the season, falling to Pacific and Winthrop to start the season.
- SIUE’s game against Winthrop was back on Nov. 10, as the Cougars have had 11 days in between games.
- Through two games, David McFarland leadss the Cougars with 18.5 ppg, while Brandon Jackson is averaging 12.5 ppg on .733 shootiing from the field as well as 6.0 rpg.

All-Tournament Honors
- A trio of Crusaders were named to the Honorable Mention All-Tournament Team at the Myrtle Beach Invitational at the tournament’s conclusion.
- Ryan Fazekas averaged 11.3 points and 4.3 rebounds per game.
- Deion Lavender posted 9.7 points, 5.0 rebounds and 6.0 assists per game, leading the tournament in assists.
- Derrik Smits averaged 11.3 points and 5.3 rebounds per game, and had Valpo’s top tournament game with a 23-point outing against Wake Forest.

No Freshman Jitters
- Freshman Javon Freeman has enjoyed a strong start to his Valpo career through four games.
- Freeman is the first Valpo freshman to score in double figures in each of the first four games of his career in at least three decades.
- In that time span, only Bryce Drew and Erik Buggs had even started their Valpo career with three consecutive games in double figures.
- Freeman’s first game against Concordia University Chicago was the highest-scoring debut by a Valpo freshman in two decades.
- Freeman scsored 22 in the season-opening win, the most points by a Valpo freshman in his debut since Lubos Barton scored 27 in a win over South Carolina in November of 1998 - also the last time a Valpo freshman led the team in scoring in his debut.

Distributing the Ball
- Graduate transfer Deion Lavender has been productive early on in his Valpo career getting others involved offensively.
- Lavender is averaging 5.8 assists/game through four games.
- Lavender has handed out at least five assists in all four games, including a season-best seven against Western Kentucky.
- Lavender is the first Valpo player in at least three decades to open a season with four consecutive games of five or more assists.

Points Galore
- Fans at the ARC for the season opener saw a number on Valpo’s side of the scoreboard which hasn’t been seen in over a generation.
- Valpo’s 121 points scored were tied for the fourth-most in a single game in program history, matching a Feb. 26, 1974 win over Wabash and a March 1, 1969 victory over Wheaton.
- The last time Valpo scored more than 121 points was in its program-record 138-point outing against Muhlenberg on Dec. 6, 1968.
- The 56-point margin of victory was the seventh-highest in program history.
- Six players finished in double figures in the win, the first time a sextet of Valpo players has scored 10 or more since an 86-84 win over Oakland on Feb. 19, 2016.