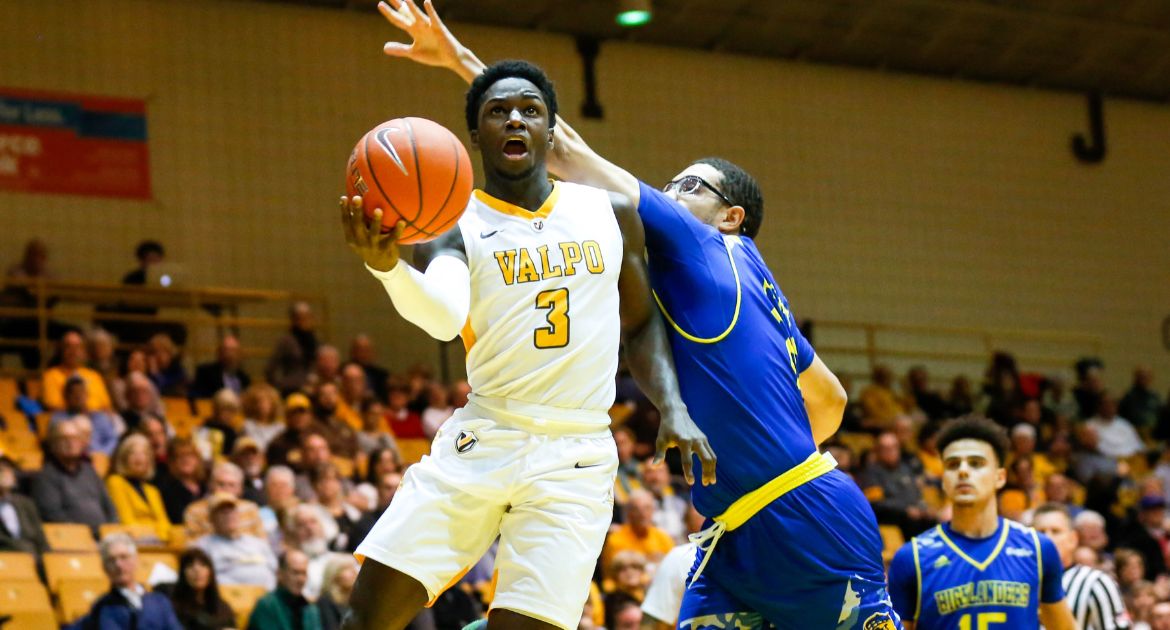 Next Up in Valpo Basketball: The Valparaiso University men’s basketball team looks for its third consecutive win as it returns to the court on Tuesday evening, hosting High Point at the ARC. The Panthers are led by former national champion head coach Tubby Smith.

Last Time Out: Five players scored in double figures and Valpo led nearly start to finish in an 82-73 victory over UC Riverside at the ARC Sunday afternoon. Derrik Smits paced Valpo with 18 points, while Markus Golder added 16 points in just 19 minutes of action off the bench.

Head Coach Matt Lottich: Matt Lottich (44-29) is in his sixth season overall at Valpo and third as head coach in 2018-19. Lottich led Valpo to 15 victories in his second season in charge in 2017-18 and guided the Crusaders through the move to the MVC, which ended the campaign ranked eighth nationally in conference RPI. In his first year as head coach, Lottich guided Valpo to its fifth Horizon League regular season championship in the last six years as he led the Crusaders to 24 wins and an at-large berth into the NIT.

Series Notes: Tuesday marks the first meeting all-time between Valparaiso and High Point. In fact, Valpo has only faced one current Big South conference member in program history - the Brown and Gold took on Longwood three times in the span of 372 days over the 2004-05 and 2005-06 seasons. The most recent matchup came at the ARC on Jan. 7, 2006 - a 105-73 Valpo victory.

...in the win over UC Riverside
- Valpo trailed for just 18 seconds in the win over the Highlanders, taking the lead for good 1:35 into the game.
- Valpo led by as many as 14 in the first half and by as many as 13 in the second half, but UCR cut the lead to just five points with 2:39 to play. The Highlanders would get no closer though.
- Valpo dominated the paint, doubling the Highlanders’ output from in close, 44-22. Valpo also out-rebounded UCR, 32-24, and tallied 17 assists against just 10 turnovers.
- Five Valpo players scored in double figures, led by 18 points from Derrik Smits - the fourth time Smits has paced Valpo in scoring in the last five games.
- Markus Golder matched his season high and finished just two points off his career best with 16 points on 6-of-8 shooting from the field, including three 3-pointers.

...in the win at UNLV
- Valpo trailed the Runnin’ Rebels 31-20 with 5:46 to play in the first half following an 11-0 UNLV run.
- The Crusaders out-scored UNLV 11-4 to close the first half within four points, and then went on a 15-2 run over the first six minutes of the second half.
- The Runnin’ Rebels got no closer than six points in the final minutes of the game.
- Valpo has now won its MWC/MVC Challenge series game in each of its two seasons as an MVC member institution.
- Valpo’s win over the Rebels gave the MVC a 5-3 lead in the series with two games remaining on Saturday.
- Wednesday’s victory was the sixth straight for the Valpo men’s basketball program in Las Vegas, dating back to 2004.
- Facing one of the nation’s top rebounding teams, Valpo more than held its own on the glass. UNLV held a slim 45-41 advantage on the boards, but Valpo grabbed 17 offensive rebounds to the Rebels’ 16 and enjoyed an 18-6 edge in second-chance points.

...looking ahead
- The Brown and Gold travels to Washington, D.C. to take on George Washington Saturday.
- Valpo then is off for finals week before returning to action at the ARC Monday, Dec. 17 against Ball State.

@HPUMBB
- High Point enters Tuesday’s game at 3-5 overall, having dropped each of its last two games - including a buzzer-beater defeat against Eastern Kentucky last time out.
- Jahaad Proctor paces the Panthers, averaging 20.8 points per game, while Brandonn Kamga also is averaging 14.8 points per game.
- Head Coach Tubby Smith is in his first season at the helm of his alma mater. The 1973 HPU graduate is in his 28th season as a collegiate head coach and owns 600 career wins - most notably leading the 1998 Kentucky men’s basketball team to a national championship.

There Is Nothing I Do Better Than Revenge
- Sunday’s win over UC Riverside kicked off what can be viewed as a revenge tour for the Valpo basketball program during the month of December.
- Valpo fell at UC Riverside last season by a 73-60 final and trailed 34-13 18 minutes into that contest.
- Coming up Saturday, Valpo will play at George Washington in a rematch of the 2016 NIT championship game that the Colonials won 76-60.
- Monday, Dec. 17 brings Ball State to the ARC - the Cardinals beat Valpo last season, 71-70, thanks to a 3-pointer by Taylor Persons with 3.3 seconds to play.
- While not nearly as recent as the three aforementioned games, Valpo has fallen at the hands of a Tubby Smith-coached team before, as Smith led the 2002 Kentucky squad to a first round NCAA Tournament win over the Crusaders.

Shooting - The Highs and the Lows
- Valpo has won its last two games despite a wide variance in its shooting numbers over the two contests.
- In last Wednesday’s win at UNLV, Valpo connected at just a 37.1% rate from the field - its worst performance in a victory since hitting 36.2% in a win over Southern Utah to open the 2016-17 season.
- Last time out in the win over UCR, Valpo improved its shooting percentage by over 20 percentage points, finishing at an even 60% clip from the floor - Valpo’s best against a Division I opponent since hitting at a 60.4% mark in a win over UIC on Jan. 8, 2015.

High Five!
- Graduate transfer Deion Lavender has been a steadying influence in Valpo’s backcourt and makes his presence felt in all aspects of the game.
- Lavender finished with 12 points and game highs of seven rebounds and seven assists last time out in the victory over UC Riverside.
- For Lavender, it was his fourth game already this year - just eight games into the season - where he posted at least five points, five rebounds and five assists.
- Matt Kenney in 2011-12 was the last Valpo player before Lavender to record four such games in the same season.
- On the year, Lavender ranks second in the MVC with 5.6 assists/game and is also averaging 9.3 points and 5.5 rebounds per game.

Dominating On Both Ends
- Junior Derrik Smits continued his strong recent run of play on Sunday with a team-high 18 points - leading Valpo in scoring for the fourth time in five games - and six rebounds in the win over UC Riverside.
- That performance followed his first career double-double in the win at UNLV, where Smits posted 20 points and a career-best 12 rebounds.
- Smits tallied 20 points and blocked a career-high five shots in Valpo’s game at West Virginia, becoming the first Valpo player to hit those marks in the same game since Zoran Viskovic posted 27 points and seven rejections in a win over Northern Illinois in January 1998.
- Earlier this year, Smits scored a career-high 23 points against Wake Forest.