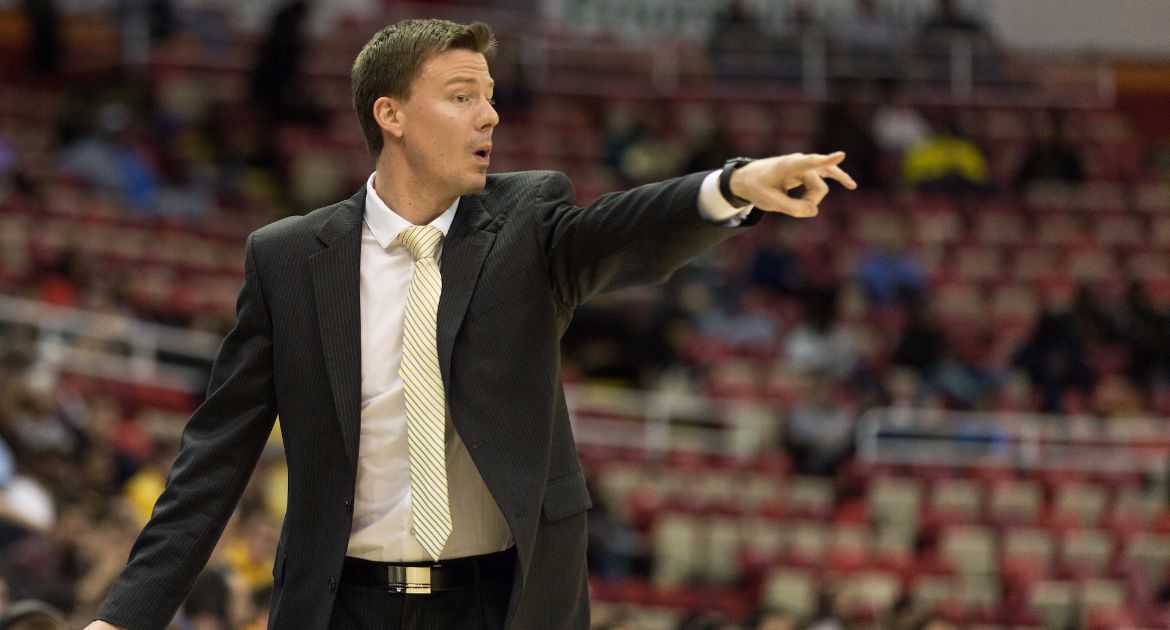 The 2019-2020 Valparaiso University men’s basketball nonconference schedule has arrived as head coach Matt Lottich has released a slate that will pit his team against at least five teams that qualified for the postseason last year.

After fans receive an early chance to get a glimpse of this year’s team with an exhibition game against Cedarville on Oct. 19 at the Athletics-Recreation Center, the 13-game nonconference slate will open up at home on Nov. 5.

Tuesday, Nov. 5 vs. Toledo
A Rockets team that went 25-8 last season including a 13-5 mark in conference play will help Valpo lift the lid on the 2019-2020 season. The Rockets have won back-to-back MAC West Division titles and qualified for the postseason a year ago, appearing in the National Invitation Tournament.

The most recent meeting between the two teams took place on Dec. 11, 2010 at Toledo, a 75-72 overtime win for the Rockets. Cory Johnson led Valpo with 25 points, while Brandon Wood scored five points in the final 42 seconds of regulation to turn a five-point deficit into a 63-all deadlock and force overtime. Toledo last came to the ARC on Dec. 12, 2009. The Rockets lead 6-5 in an all-time series that dates back to 1946-47.

Saturday, Nov. 9 at Saint Louis
A second straight matchup with a postseason team from a year ago will occur on Nov. 9 as Valpo makes its way to Saint Louis for the first road trip of the year. The Billikens went 23-13 in 2018-19 on their way to the Atlantic 10 Tournament title. The team has made four NCAA Tournament appearances in the last decade and finished last season with the program’s highest win total since 2013-14. Saint Louis has improved its win total in each of the first three seasons under head coach Travis Ford.

Tuesday, Nov. 12 at SIUE
Valpo will play the SIU Edwardsville Cougars of the Ohio Valley Conference for the third consecutive season. Valpo will look to make it three straight head-to-head wins. The two teams had not met prior to the Nov. 15, 2017 contest in Edwardsville.

Sunday, Nov. 17 vs. North Dakota
Valpo returns home to take on Summit League adversary North Dakota for just the second time ever and the first since March 5, 1966. Valpo lost that meeting as part of the NCAA Midwest Regional in Grand Forks, N.D. The Fighting Hawks are under the direction of first-year head coach Paul Sather.

Nov. 22-27 – Paradise Jam
Valpo will play three games in the U.S. Virgin Islands starting on Friday, Nov. 22 against Grand Canyon. The Lopes went 20-14 overall and 10-6 in the WAC last season, qualifying for the postseason with a CBI berth. Grand Canyon has reached the WAC Tournament championship and qualified for the postseason in each of its first two seasons as a Division-I postseason eligible team. This will mark the first meeting between the two teams.

Valpo will continue the Paradise Jam on either Saturday, Nov. 23 or Sunday, Nov. 24 against either Fordham or Nevada. The team will play on Monday, Nov. 25 in the final game in the U.S. Virgin Islands against Illinois State, Cincinnati, Bowling Green or Western Kentucky. A Valpo nonconference slate that is guaranteed to include five postseason teams from last season could include up to seven depending on how the Paradise Jam bracket unfolds.

Valpo will host Trinity Christian on Wednesday, Nov. 27 at the ARC in a game that is part of the Paradise Jam event.

Tuesday, Dec. 3 at Eastern Michigan
Valpo has won two of three all-time against Eastern Michigan, a member of the Mid-American Conference. Valpo prevailed 74-67 on Dec. 20, 2010 as part of the Lou Henson Award Tournament in Rochester, Mich. Before that, the two teams hadn’t met since 1989.

Monday, Dec. 16 at Charlotte
Valpo leads the all-time series with the 49ers 4-2 but dropped the most recent meeting, which occurred on Dec. 22, 2006 as part of the Outrigger Hotels Rainbow Classic in Honolulu, Hawaii. Valpo last played at Charlotte on Dec. 10, 2005, an 80-77 victory.

Wednesday, Dec. 18 at High Point
Head coach Tubby Smith’s team went 16-15 overall and 9-7 in the Big South last season. The Panthers pulled out a two-point win at Valpo in 2018-19, a defeat Valpo will attempt to avenge this season in North Carolina.