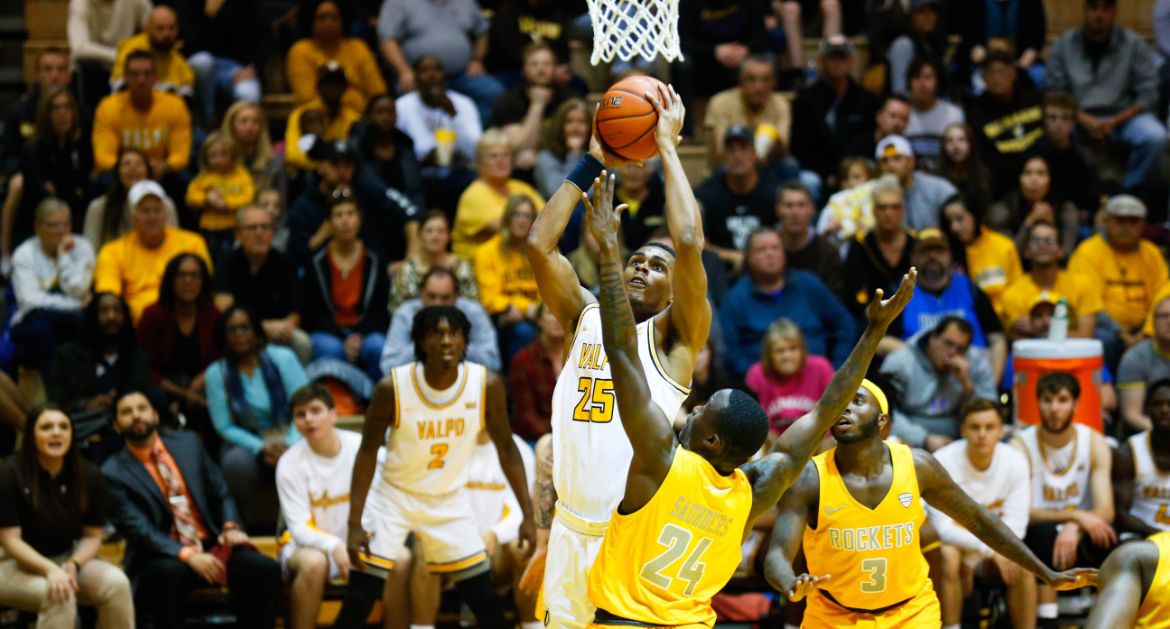 Next Up in Valpo Basketball: The first road trip of the 2019-20 season will take the Valparaiso University men’s basketball team back to the same city where the 2018-19 campaign came to an end. The route will be a familiar one, but the destination slightly different as Valpo will visit the home of the Missouri Valley Conference Tournament and conference office headquarters, but this time for a nonleague date with Atlantic 10 opponent Saint Louis on Saturday evening.

Last Time Out: Valpo’s signature player made a signature shot on Tuesday night at the Athletics-Recreation Center as Javon Freeman-Liberty converted a go-ahead left elbow jumper with four seconds remaining to account for the difference in a 79-77 triumph over Toledo. Valpo erased a 14-point deficit and led by as many as nine in a seesaw season opener against the preseason favorite to win the MAC West for a third consecutive season. The Rockets reached the NIT a year ago and entered the matchup ranked 23rd in the collegeinsiders.com Preseason Mid-Major Top 25.

Head Coach Matt Lottich: Matt Lottich (55-44) is in his seventh season overall at Valpo and fourth as head coach in 2019-20. Lottich led the team to 15 victories in his third season in charge in 2018-19, the program’s second campaign in the Missouri Valley Conference. In his first year as head coach (2016-17), Lottich guided Valpo to its fifth Horizon League regular season championship in a six-year span as he led the team to 24 wins and an at-large berth into the NIT. Lottich, hired as the 22nd head coach of the Valpo men’s basketball program in April 2016, graduated from Stanford University in 2004 and New Trier High School (Illinois) in 2000.

A Flair for the Dramatic: Valpo added a new name to its long list of late-game heroes in the program’s storied history on Tuesday night as Javon Freeman-Liberty knocked down an off-balance 15-footer from the left elbow with 3.7 seconds left in a 79-77 victory over Toledo at the Athletics-Recreation Center. That marked the 24th time since the start of the 1992-93 season Valpo has prevailed on a game-winner in the final five seconds. Although it was the first game of the regular season, it was already the second time Valpo has won in dramatic fashion this year as Daniel Sackey’s overtime buzzer-beater lifted the team past Canadian powerhouse Carleton 83-80 in overtime on its foreign tour in August.

Down But Not Out: Valpo trailed by as many as 14 points in Tuesday’s season opener at Toledo, rallying from down 21-7 with 13:28 left in the first half to lead by as many as nine in the seesaw affair. That marked Valpo’s largest comeback since Nov. 12, 2016, when the team trailed by 16 and beat Trinity Christian 89-75. It was the program’s largest comeback against a Division-I opponent since Jan. 17, 2013, when Valpo came from 22 down to beat Detroit Mercy 89-88. In Matt Lottich’s head coaching tenure (fourth season), Tuesday was already the ninth time Valpo has come from down by double figures to emerge victorious. The team overcame four double-figure deficits in 2016-17 (Wright State, Cleveland State, BYU and Trinity Christian), two in 2017-18 (Bradley and UNCW) and two in 2018-19 (George Washington and Illinois State).

Close Calls: This year’s home opener flipped the script on last year’s home finale as Valpo closed out the 2018-19 regular season with a 65-63 loss to Evansville at the ARC on March 2. The Nov. 5 return to the team’s home building was a more pleasant two-point affair with Valpo topping Toledo 79-77. The Brown & Gold have already played six games under Lottich decided by two points or fewer – this year’s opener vs. Toledo, three in 2018-19 (Evansville, Illinois State, High Point) and one in each in 2017-18 (Ball State) and 2016-17 (Milwaukee). The victory over Toledo was Valpo’s second win under Lottich decided by one or two points, joining last season’s buzzer-beating victory over Illinois State. The team has already played 23 games dictated by five points or fewer during Lottich’s time as head coach (fourth season).

Birthday Boy: Freshman Emil Freese-Vilien made his collegiate debut on his birthday in Tuesday’s win over Toledo and celebrated with four points, three rebounds and two assists in the victory.

Series Notes: Valpo holds a slim 5-4 edge in the all-time set with the Billikens. Saturday will mark the renewal of a series that has been on hold since SLU’s 67-65 victory on Dec. 7, 2013. Valpo won the first five meetings – four of which came in the 1920s – but Saint Louis has rapped off four straight head-to-head wins. Valpo is seeking its first win over SLU since Dec. 18, 1982. Valpo is 0-3 in games at Saint Louis, falling 62-49 on Dec. 2, 2012 in the most recent visit. The two-point loss at the ARC in 2013 came in dramatic fashion as LaVonte Dority tied the game on a layup with 3.8 seconds left before a buzzer-beating put-back by Mike McCall sent the Billikens to a 67-65 win.

Owning the Glass: Valpo pulled down 18 offensive rebounds, its highest total since also grabbing 18 on Dec. 20, 2017 at UC Riverside. The Brown & Gold were +10 on the offensive glass, permitting the Rockets to collect just eight offensive caroms.

Reversing Toledo Trends: Toledo went 21-1 in 2018-19 when holding opponents under 45 percent shooting, but Valpo managed a victory on Tuesday despite a 43.7 percent clip. The win came thanks in large part to a 40-39 advantage on the boards and 21-15 edge in the turnover category. The Rockets were 14-1 in 2018-19 when shooting 45 percent or higher, but dropped the opener in Valpo despite a shooting percentage of 49.1.

Starting Strong: Valpo is starting the season with back-to-back games against teams that reached either the NIT (Toledo) or the NCAA Tournament (Saint Louis) a year ago. This marks the first time since 1998-1999 that Valpo has opened the season with consecutive contests against teams that qualified for either the NCAA Tournament or NIT the year prior. Valpo opened the 1998-99 campaign at the NABC Classic in Indianapolis, picking up victories over South Carolina (NCAA previous season) and Seton Hall (NIT previous season). In addition, Valpo is the only team in the Missouri Valley Conference this season to play defending NCAA Tournament or NIT teams in each of its first two games.