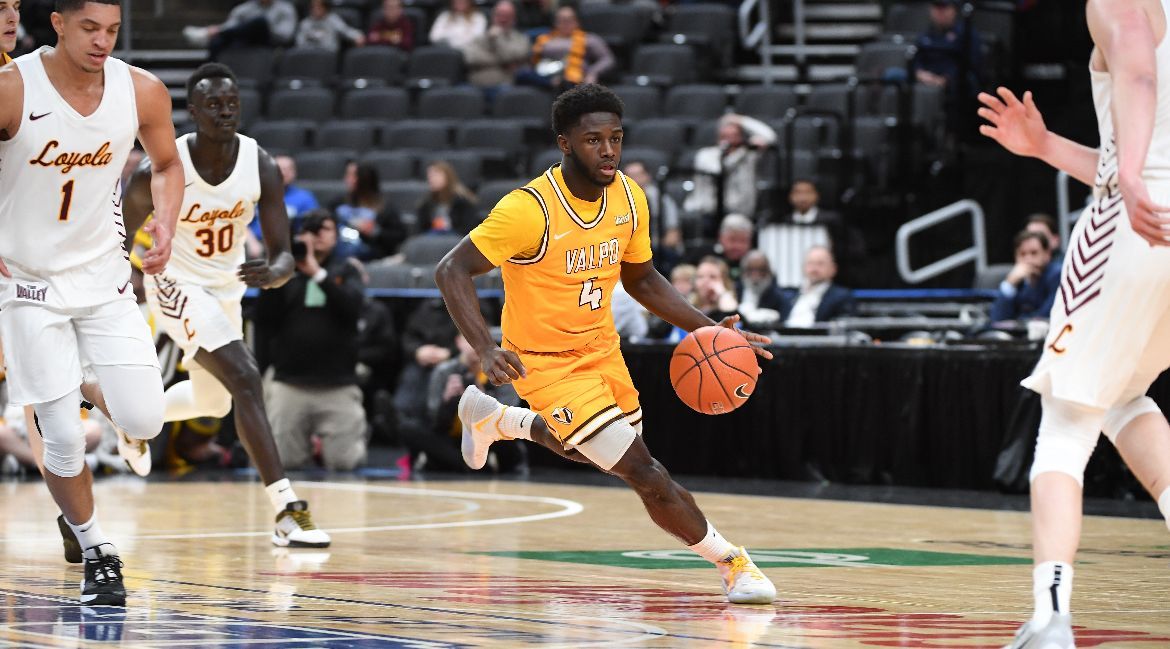 From the moment he first stepped onto the Athletics-Recreation Center floor as a freshman during the 2018-19 season, Daniel Sackey’s vocal leadership skills were clear to teammates, coaches and fans alike.

Now a junior, Sackey has settled in to his role as an emotional tone-setter.

“One thing I try to do personally is encourage the freshmen as much as I can,” he said. “I think our freshmen can be very, very good and contribute early on. It can get frustrating to come in and learn all new principles as a freshman, so I try to keep them in good spirits. I want to push myself and everyone around me so we can excel as a team.”

Sackey’s childhood in Winnipeg, Manitoba, Canada shaped who he is today, and much of his motivation comes from those closest to him — his family. The son of David and Mercy, Sackey has two older brothers and an older sister — Desmond and twins Clement and Tina.

“My family is as close as it gets,” he said. “I have so many memories from growing up with all the great times we had. I miss them every day and talk to them a lot. It is definitely a sacrifice to be away from them. They keep me going and keep me motivated. They’re my backbone and they’re the reason I am where I am today. They are so supportive, and I can’t thank them enough. I can’t put into words how much I appreciate them.”

Sports and music were two key components of Sackey’s childhood that remain big parts of his family to this day. In addition to basketball, he enjoys watching soccer and played the sport growing up. Outside of the athletics realm, he plays the drums in his spare time and does so at church with his family when he’s at home in Winnipeg.

“Growing up, my mom would play gospel music around the house all the time,” Sackey said. “To this day, she still does. My older brother played the drums, and I thought that was cool so I wanted to try. My dad played drums at our church at that time. My parents bought me a drum set when I was very young, so I’ve been beating the drum since I was a little kid. As I got older, I began playing the drums at church when I was around 12 or 13. Even since then, it’s been a part of who I am.”

Last season, Sackey ranked fifth in the Missouri Valley Conference and second among sophomores at 3.6 assists per game and had a team-high 121 assists to go along with 6.3 points per game, 2.5 rebounds per game and 35 total steals. He scored in double figures nine times while handing out five or more assists on 10 occasions. A starter for the majority of his career, Sackey responded in a positive manner when he came off the bench for nine games, providing a key spark when used in that capacity.

“I learned that no matter what’s going on, I still have to go out there and perform,” Sackey said. “That’s something I’ve learned as I’ve gotten older. I have to do everything I can to help my team win. Once I developed that mindset, it helped me a lot to just go out there and have fun.”

The team’s propensity for coming from behind and late-season surge in 2019-20 helped Valpo set the stage for taking another step forward in 2020-21.

“Our conference tournament run said a lot about our program,” Sackey said. “We’ve shown that we’re going to fight regardless of the circumstances. We’ve earned some respect around the league for reaching the championship in only our third year in the conference. I think that definitely speaks volumes about where we are as a program. We’re very motivated and hungry to get back to the championship and win it this year.”

During the offseason, Sackey focused on improving the mental aspect of his game.

“Early in the offseason, we couldn’t do much, so that gave me the opportunity to dive into a lot of film,” Sackey said. “The game is physical, but it’s far more mental than it is physical at this point. I’ve been continuing to work on my shooting and trying to improve every aspect of my game. Our team motto is to get 1 percent better every day, and if I can do that, I can help put our team in a position to succeed.”