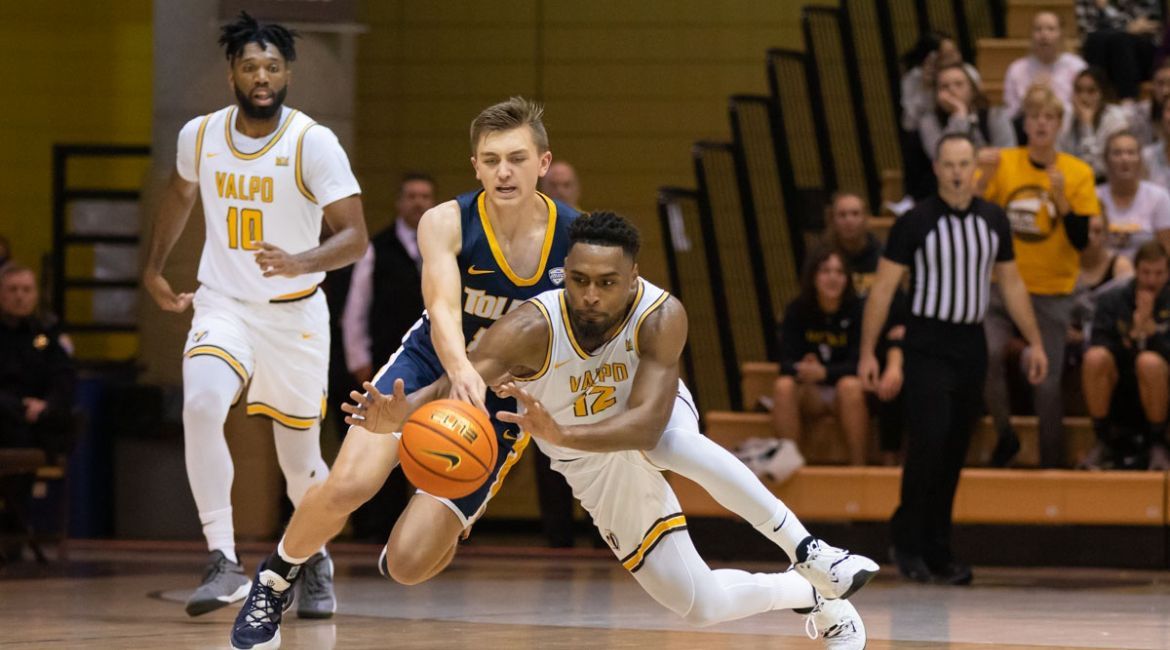 Next Up in Valpo Basketball: The Valparaiso University men’s basketball team will close out a four-game home stretch (two exhibitions, two regular-season contests) by hosting former league foe UIC on Saturday. This will mark the first time a Horizon League team has played a regular-season game at the Athletics-Recreation Center since Valpo departed the league to join the Missouri Valley Conference prior to the 2017-2018 season. Valpo last started a season with back-to-back home games in 2017-18 and last began with a pair of Division-I home contests in 2015-16. It will be Beach Day at the ARC with sunglasses being given away to early-arriving students.

Last Time Out: Valpo erased a 10-point deficit to take a 61-60 lead on a traditional 3-point play by Trevor Anderson with 3:32 remaining, but visiting Toledo scored the game’s final nine points to prevail 69-61 in Tuesday’s season opener at the ARC. A quartet of Beacons finished in double figures with newcomers accounting for the team’s top three scorers – Thomas Kithier (16), Kevion Taylor (12) and Trevor Anderson (11). Anderson dished out five assists and shared the team lead with five rebounds while connecting on five of his eight field-goal attempts. Kithier squeezed five boards to go along with his efficient 8-of-11 shooting performance. Shooting from the perimeter was a bugaboo, as Valpo hit 3s at a 21.7 percent clip (5-of-23). Toledo’s JT Shumate had 20 points and nine boards.

Head Coach Matt Lottich: Matt Lottich (83-79) is in his ninth season overall at Valparaiso University and sixth as the head coach of the men’s basketball program in 2021-2022. The 2020-2021 season saw Valpo improve its Arch Madness seeding for the fourth straight year as the program continued to make positive strides in each season as a Missouri Valley Conference member. The team earned a first-round bye in the State Farm MVC Tournament for the first time since joining the prestigious league. Valpo upset previously-undefeated Drake, the nation’s No. 25 team, 74-57 on Feb. 7, 2021 at the ARC, the fourth win over an AP Top 25 team in program history and second under Lottich. The Bulldogs were one of three undefeated teams in the nation prior to that setback, joining Gonzaga and Baylor. Just two years removed from finishing in last place and being knocked out in the first round of the Missouri Valley Conference Tournament as a first-year Valley member, Lottich’s team did more than hold its own in 2019-2020, ascending into a tie for sixth in the league standings before finishing as the conference tournament runner-up. Valpo became the first team in the history of Arch Madness to reach the title game after playing in the opening round. Lottich, hired as the 22nd head coach of the Valpo men’s basketball program in April 2016, graduated from Stanford University in 2004 and New Trier High School (Illinois) in 2000.