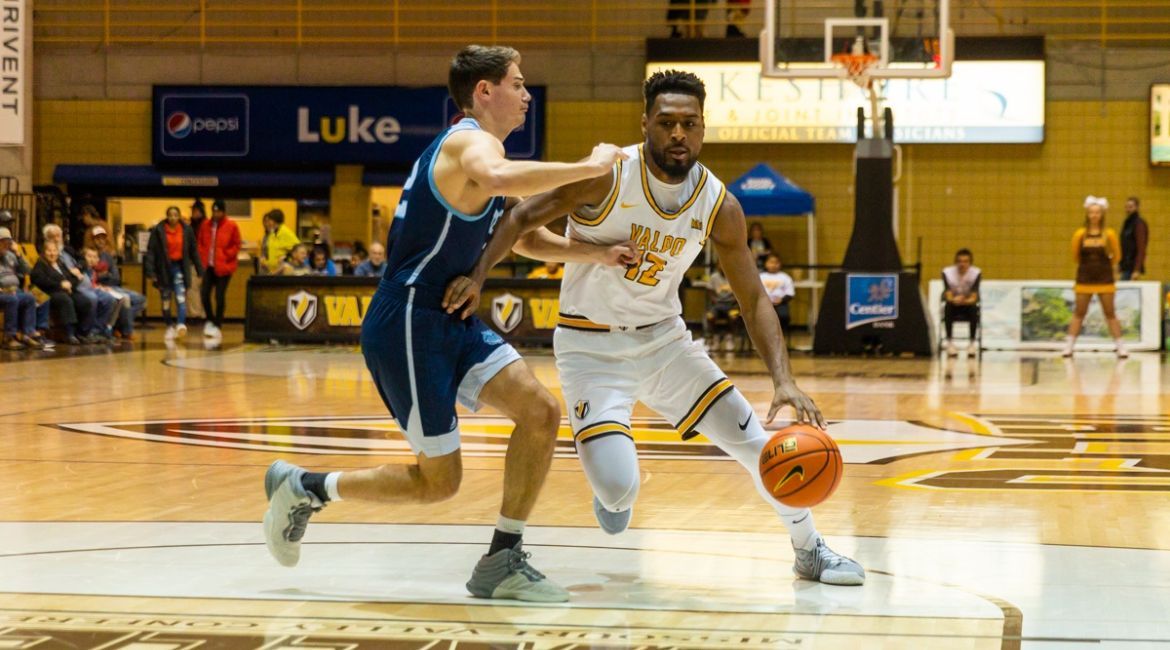 Next Up in Valpo Basketball: Missouri Valley Conference play begins on Thursday night as the Valparaiso University men’s basketball team will make its way to Des Moines, Iowa for a nationally-televised showdown with Drake on ESPNU. Valpo’s lone conference outing prior to Jan. 2 will pit the Beacons against a Bulldogs squad that earned an at-large NCAA Tournament bid last season and won a first-round game against Wichita State. Each Valley team will play one conference game this week as the opener was moved up from the first window after Christmas (Dec. 28-29) in an effort to create a nonconference scheduling opportunity.

Last Time Out: All 13 Valpo players who saw action in Saturday’s home rout of Trinity Christian scored as the Beacons blitzed the Trolls 106-69 in the final tune-up before tipping off the league slate. Ben Krikke’s career-high 26 points led four Beacons in double figures as Valpo hit the century mark for the first time since 2018 and captured its third win in the last four games. The hosts drained 11 3s and threw down five dunks in the contest.

Head Coach Matt Lottich: Matt Lottich (86-82) is in his ninth season overall at Valparaiso University and sixth as the head coach of the men’s basketball program in 2021-2022. The 2020-2021 season saw Valpo improve its Arch Madness seeding for the fourth straight year as the program continued to make positive strides in each season as a Missouri Valley Conference member. The team earned a first-round bye in the State Farm MVC Tournament for the first time since joining the prestigious league. Valpo upset previously-undefeated Drake, the nation’s No. 25 team, 74-57 on Feb. 7, 2021 at the ARC, the fourth win over an AP Top 25 team in program history and second under Lottich. The Bulldogs were one of three undefeated teams in the nation prior to that setback, joining Gonzaga and Baylor. Just two years removed from finishing in last place and being knocked out in the first round of the Missouri Valley Conference Tournament as a first-year Valley member, Lottich’s team did more than hold its own in 2019-2020, ascending into a tie for sixth in the league standings before finishing as the conference tournament runner-up. Valpo became the first team in the history of Arch Madness to reach the title game after playing in the opening round. Lottich, hired as the 22nd head coach of the Valpo men’s basketball program in April 2016, graduated from Stanford University in 2004 and New Trier High School (Illinois) in 2000.

Early Opener: This will mark the earliest Valpo has started conference competition since Dec. 2, 2010, when the team tipped off Horizon League action with a 68-66 overtime victory at UIC. This snaps a streak of Valpo opening Missouri Valley Conference play at home in three straight seasons. Valpo is 1-3 in league lidlifters since joining The Valley and 2-3 in conference openers under Matt Lottich. The early opener comes a year after Valpo tipped off league play on Jan. 9 vs. Missouri State, the team’s latest start to the conference docket since 2003. Valpo has won its first league road game in each of the last three seasons, a streak it hopes to extend to four on Thursday. The team won at Missouri State in 2019, at Evansville in 2020 and at Illinois State in 2021.

Series Notes: The most recent matchup between these two teams was a memorable one as Valpo upset No. 25 Drake 74-57 on Feb. 7, 2021 at the Athletics-Recreation Center, handing the Bulldogs their first loss of the season. At the time, Drake was one of just three undefeated teams in the nation, joining Baylor and Gonzaga. That victory, the fifth in program history against a ranked opponent and the second during the Matt Lottich Era, came a day after giving the Bulldogs a scare in an 80-77 setback. Due to last year’s unique scheduling format during the COVID-19 pandemic, this will represent Valpo’s first trip to Des Moines since Feb. 19, 2020, a game that saw the guests rally from 19 down to force overtime in an eventual 77-75 setback. Valpo is 8-6 in the all-time series. The two teams have split the eight meetings since Valpo joined the Missouri Valley Conference prior to the 2017-18 campaign.