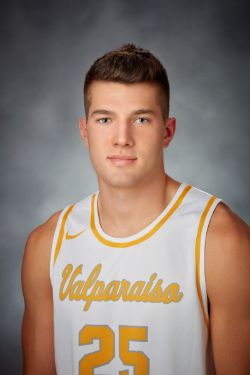 Enters senior season as an All-American candidate and frontrunner for preseason Horizon League Player of the Year honors … declared for 2016 NBA Draft on Apr. 7 following junior year and went through the draft process, withdrawing from the draft in late May … attended Nike Skills Academy in Los Angeles July 25-27 and was praised by the national media as one of the camp's top performers ... with one full season to play, ranks fourth in Valparaiso career history in scoring, 3-pointers made and 3-point percentage, seventh in rebounds and free throw percentage, and eighth in field goals made.

2015-16: Enjoyed one of the most successful seasons by a Crusader in program history … named an Honorable Mention All-American by the Associated Press, one of 55 honorees nationwide … just the fifth Valpo player to earn All-American accolades in the last 48 years … earned NABC First Team All-District 12 and USBWA All-District V accolades, as well as repeating as a First Team All-Horizon League recipient … averaged team highs of 18.4 points and 8.5 rebounds per game, shooting 50.5% from the floor, 44% from 3-point range and 85% from the foul line … ranks second in a single season in program history in points scored (679), fifth in rebounds (313), fourth in free throws made (142), fifth in 3-pointers made (91) and seventh in field goals made (223) … is only the second player in Division I over the last two decades to average at least 18 points and eight rebounds per game while hitting at least 80 3-pointers, joining Kevin Durant … started all 37 games to set a new program record for games played in a single season … has now started all 105 of Valpo’s games through his first three seasons … one of the nation’s most efficient players, ranked fourth in Ken Pomeroy’s Offensive Rating metric among players who used at least 20% of their team’s possessions – his second straight season ranking among the top-10 nationally … earned 17 Game MVP honors from KenPom.com, tied for seventh-most nationally … ranked second in the Horizon League in rebounding and free throw percentage, fifth in scoring, 3-point percentage and 3-pointers/game, and seventh in field goal percentage … scored in double figures 35 times, including 12 efforts with at least 20 points and three games scoring 30 or more points … led Crusaders in scoring on 25 occasions … reached double digits in rebounds 14 times, posting double-doubles in all 14 games – good for 34th nationally … paced Valpo on the boards in 22 contests … opened season with 24-point effort, including 9-of-10 mark from foul line, in Nov. 13 win over IPFW … reached double figures in rebounding for the first time on the season in Nov. 24 win at Oregon State, grabbing 12 boards … poured in 28 points on 10-of-18 shooting, including five 3-pointers, Nov. 28 at Ball State … tied program record for most 3-pointers in a game without a miss Dec. 11 in win at Chicago State, going 6-for-6 from behind the 3-point line … finished win over the Cougars with 26 points, hitting 8-of-11 total from the field … set new career high with 39 points in Jan. 10 victory at Detroit, tying the seventh-highest single-game scoring output in Valpo history … earned national acclaim with his performance against the Titans as he went 12-of-20 from the field and 11-of-11 from the foul line – the best free throw shooting performance by a Crusader since 1998 … also grabbed 14 rebounds in the win, setting a then-career high … named Horizon League Player of the Week and CollegeInsider.com Lou Henson Award National Player of the Week on Jan. 11 for his efforts against Detroit and two days earlier at Oakland (15 points [6-10 FG], 11 rebounds in nationally-televised victory) … scored 21 points and grabbed 13 rebounds in league win over Green Bay Jan. 16 … needed just 14 minutes to score 18 points at Youngstown State Jan. 18, hitting all four of his 3-point attempts … went 7-of-10 from the floor for 18 points in home win over YSU Jan. 30 … closed season with perhaps strongest stretch of his career, averaging 23.2 points and 10.1 rebounds per game over Valpo’s final 10 games of the year … shot 6-of-7 from the field for 16 points and also grabbed 14 rebounds in Feb. 19 win over Oakland … followed with 32 points [7-12 FG; 5-8 3PT; 13-15 FT] and 11 rebounds Feb. 21 in victory over Detroit … set new career high for free throws made in the win over the Titans … named National Player of the Week by CBSSports.com Feb. 22 for his performances against Oakland, Detroit and earlier in the week at Cleveland State (15 points, 10 rebounds) as he averaged 21 points and 11.7 rebounds per game on 65.5% shooting in the three wins … also earned second Horizon League Player of the Week accolade of the year … continued stellar play the next weekend, posting 23 points – including 5 3-pointers – in overtime win at Milwaukee Feb. 26 … followed with 25 points and a new career-best 15 rebounds in regular season finale victory at Green Bay Feb. 28 … earned third league weekly award of the year and was also tabbed American Sports Network National Player of the Week Feb. 29 for his efforts in the previous two wins … went off for 32 points and 12 rebounds Mar. 7 in semifinal of the Horizon League Championship versus Green Bay … went 13-of-14 from the foul line against the Phoenix to tie career high for free throws made … was on receiving end of 80-foot baseball pass late in regulation, laying it in with 0.5 seconds to play to tie game – a play which made SportsCenter’s Top 10 Plays on ESPN … was named to Horizon League All-Tournament Team for second straight year … opened NIT Mar. 15 against Texas Southern with 28-point performance, and followed it up two days later with 26 points on 9-of-14 shooting in win over Florida State … dropped 20 points on Saint Mary’s Mar. 22 in quarterfinal victory while also handing out career-best five assists … scored 15 points in both the NIT semifinal win over BYU and title-game loss to George Washington at Madison Square Garden … grabbed nine rebounds in the semifinal victory and 10 in the title game as well en route to earning All-Tournament Team honors … also strong in the classroom, named a CoSIDA First Team Academic All-District V honoree for a second straight season … an Academic All-League selection and member of Horizon League Academic Honor Roll.

2014-15: Started all 34 games for Valpo as a sophomore ... a First Team All-Horizon League honoree and NABC First Team All-District 12 ... named Horizon League Championship tournament MVP ... became first Crusader in program history to score 1,000 points by the end of their sophomore season, cracking the milestone in the NCAA Tournament against Maryland ... led the Crusaders, averaging 16.8 points and 6.7 rebounds per game ... ranked fourth in the league in scoring and sixth in rebounding, the only Horizon League player to rank in the top-six in both categories ... also ranked third in the league in 3-pointers/game (2.4) and 3-point percentage (46.6%), fourth in free throw percentage (82.9%) and ninth in field goal percentage (48.9%) ... closed sophomore year among top-100 in the country in scoring, field goal percentage, free throw percentage and 3-pointers/game ... finished season ninth in the nation in Ken Pomeroy's Offensive Rating metric (124.7) among players who used at least 20% of their team's possessions ... scored in double figures on 28 occasions, including 11 games of at least 20 points ... posted six points-rebounds double-doubles on the year ... led Valpo in scoring in 20 games and in rebounding 17 times ... opened season with 27-point effort to lead Valpo to win in season opener Nov. 14 against East Tennessee State ... scored 50 points over Valpo's two wins at the Central Michigan Tournament, earning All-Tournament Team honors ... shot 69.2% (18-of-26) from the floor in the two games at CMU ... closed tournament with career-high 31-point effort in just 21 minutes of action against Maine Nov. 23 ... scored 22 of his points against Maine in the first half, helping stake Valpo to 25-point halftime lead ... named Horizon League Player of the Week Nov. 24 ... named Tournament MVP the next weekend at the Challenge in Music City, averaging 18.7 ppg and 5.7 rpg over three Valpo wins and hitting 58.8% of his 3-point attempts ... went for 26 points and eight rebounds in rout of Murray State Nov. 29 ... scored 20 points the next day in win over Portland ... knocked down career-high seven 3-pointers (7-of-8) in Dec. 3 win at Eastern Kentucky ... posted first double-double of year (23 points, 10 rebounds) in win over Ball State Dec. 13 ... scored 23 points in second half for come-from-behind win at IPFW Dec. 20 ... scored 29 points in just 21 minutes the next day in win over Goshen ... named Horizon League Player of the Week Dec. 22 ... posted 10 rebounds in back-to-back games Dec. 29 at James Madison and Jan. 2 at Oakland ... finished with 24 points, including a 5-of-7 effort from 3-point range, in win Jan. 10 against Cleveland State ... kicked off stretch of 10 consecutive double-figure scoring games Jan. 26 with 24 points (10-of-14 FG) in 24 minutes in win over Milwaukee ... posted four double-doubles in a six-game stretch Feb. 4-25 ... closed regular season with 15 points on just six field goal attempts (5-of-6) in title-clinching win at Cleveland State Feb. 27, including clutch four-point play late ... scored 22 points in Horizon League semifinal win over CSU Mar. 7 ... led Valpo with 18 points in NCAA Tournament Mar. 20 against Maryland, hitting the 1,000 career point milestone with 7:35 to play ... named a CoSIDA Academic All-District V First Team honoree ... named to Academic All-Horizon League team ... member of Horizon League Academic Honor Roll.

2013-14: Appeared in all 34 of the Crusaders' games as a freshman ... named to Horizon League All-Freshman Team ... four-time league Freshman of the Week ... averaged 12.7 points and 4.8 rebounds per game on the season ... highest-scoring Valpo freshman since Lubos Barton in 1998-99 ... posted most rebounds by a Crusader freshman since Raitis Grafs in 1999-2000 ... led Crusaders in scoring 12 times and in rebounding on nine occasions ... finished season 10th in the league in field goal percentage (.490), 3-point percentage (.383) and 3-pointers/game (1.7) ... also ranked among league's top-15 in scoring and free throw percentage (.773) ... debuted with 12 points and eight rebounds in win over Murray State Nov. 8 ... earned first league Freshman of the Week award Nov. 11 ... registered a double-double at Ohio Nov. 17 with 16 points and a season-high 13 rebounds ... followed by scoring 30 points at Evansville Nov. 20 ... hit 10-of-15 from the floor, including seven 3-pointers, against the Purple Aces ... 30 points matched the most by a Valpo freshman since Grafs in January of 2000 ... followed with a 15-point effort versus James Madison next time out ... picked up HL Freshman of the Week honors Nov. 25 ... narrowly missed double-double with 22 points and nine rebounds in triple-OT outing against Mercer Nov. 29 ... tallied second 30-point effort of the season Dec. 14 in win over Loyola Marymount, going 9-16 from the field (4-7 3PT) and 8-of-9 from the foul line ... became just the fifth Crusader in the past two decades to score 30+ points at least twice in a career ... awarded league Player of the Week honor from College Sports Madness and earned third HL Freshman of the Week accolade Dec. 16 ... closed season strong, scoring in double figures in eight of the Crusaders' last ten games and leading Valpo in scoring eight times ... opened stretch with 16-point effort against Detroit Feb. 7 ... poured in 22 points, including five 3-pointers, in win over Youngstown State Feb. 22 ... received final HL Freshman of the Week accolade Feb. 24 ... stood out in opening round of Horizon League Championship in the Crusaders' win over UIC Mar. 4 ... missed just one shot from the floor, going 10-of-11, while also going 7-of-10 from the foul line for 29 points, just one shy of his season high ... set new HL Championship record for field goal percentage in a game (.909) ... also paced the Crusaders versus the Flames with eight rebounds ... followed with 18 points in second-round action against Milwaukee Mar. 7 ... went a perfect 13-of-13 from inside the 3-point line in the Crusaders' two HL Championship games ... led the Crusaders in their CIT game against Columbia Mar. 18 with 14 points.

Prep: A four-year letterwinner for the Panthers ... finished fifth in Illinois Mr. Basketball voting as a senior ... led Washington to 28 wins and a spot in the regional finals in his final season ... a First Team All-State selection in each of his final two seasons ... also twice earned First Team All-Conference honors ... team led squad to title at State Farm Tournament of Champions as a senior, earning tournament MVP honors ... played AAU basketball for Peoria Irish ... also earned two letters in football.