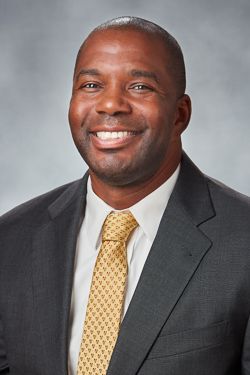 Todd Townsend joined the Valparaiso University men’s basketball program prior to the 2018-19 season and enters his second season as an assistant coach in 2019-20. He helped guide Valpo to 15 victories in his first season on staff. A former team captain and member of the 2003 Final Four team at Marquette, Townsend’s coaching tenure has helped him build strong ties for recruiting in the Midwest and Chicago area.

Most recently prior to arriving at Valpo, Townsend spent the 2016-17 season as an assistant coach at Milwaukee, coaching alongside current Butler head coach LaVall Jordan and helping to lead the Panthers to the Horizon League championship game.

Townsend brings coaching experience in the Missouri Valley Conference to Valparaiso as well, as he served three seasons as an assistant coach at Drake before heading to Milwaukee. Townsend spent four seasons in a similar role at Northern Illinois prior to making the move to Drake. While at NIU, his recruiting efforts helped attract some of the top talent in Illinois to campus.

On the court, Townsend helped mentor Xavier Silas, the leading scorer in the Mid-American Conference and seventh-leading scorer in the nation during the 2010-11 season. During Townsend’s first season on staff, Silas became the first NIU player to earn all-district honors in more than a decade. Silas went on to become the first Huskie to play in the NBA since 1997, spending the 2011-12 season as a member of the Philadelphia 76ers organization.

As a recruiter, Townsend helped NIU sign a number of high-profile in-state recruits, including current Boston Celtic Abdel Nader, a top-10 recruit in Illinois and Dre Henley, a top-25 recruit in Illinois. Tim Toler, a first team junior college All-American, and highly recruited twins Keith and Kevin Gray were also actively recruited by Townsend and helped the Huskies start to rebuild the program with a young foundation.

As a member of NIU head coach Mark Montgomery’s first staff in 2011-12, Townsend helped coached one of the youngest teams in the nation. NIU saw 55.9 percent of its minutes played by freshmen, the sixth-highest percentage in the country, and the Huskies lead the MAC in offensive rebounds while ranking second in rebounding defense and third in rebounding margin. Abdel Nader became the first NIU player since 2009 to be named to the MAC All-Freshman team.

Prior to coming to NIU, Townsend spent the 2008-09 season in Europe, playing and coaching professionally. Townsend started the season in Germany playing for the Dusseldorf Giants before finishing the season in Sweden as a player/coach with the Norrkoping Dolphins.

Before beginning his coaching career at Northeastern, Townsend served two years as the director of basketball operations at his alma mater, Marquette. Working under then-head coach Tom Crean, Townsend was part of a staff that guided the Golden Eagles to two consecutive NCAA Tournament appearances, a 20-12 BIG EAST Conference ledger and a combined record of 44-21 in back-to-back 20-win campaigns.

In four seasons as a player at Marquette (2001-05), Townsend helped the Golden Eagles win 91 games, advancing to postseason play in all four seasons. Marquette made two trips to the NCAA Tournament during Townsend’s playing career, including a trip to the NCAA Final Four in 2003. Townsend started all 33 games on the team that reached Marquette’s first Final Four since 1977. He captained the Golden Eagles during his senior season and was a two-time recipient of the Bart Miller Standard of Excellence Award.

Townsend earned his bachelor’s degree in communication studies in 2005 from Marquette University, where he met his wife Christine. He has four children: Tyson, Leila, Charlotte, and Isabelle.