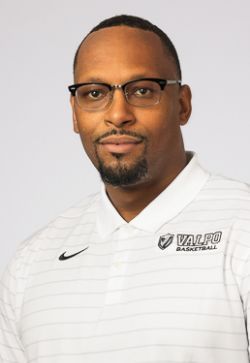 Rob Holloway joined the Valparaiso University men’s basketball program prior to the 2018-19 season and completed his fourth season as an assistant coach in 2021-22.

During the 2021-22 season, Holloway was on staff as Valpo players hauled in seven Missouri Valley Conference postseason honors won by five different players. For the first time since joining The Valley, Valpo secured a sweep of Indiana State and Evansville, going 5-0 against those instate opponents. Several Valpo players earned noteworthy individual achievements, including Kevion Taylor scoring the 2,000th point of his collegiate career.

Holloway plays a key role in the program’s recruiting efforts while also assisting with scouting and game preparation.