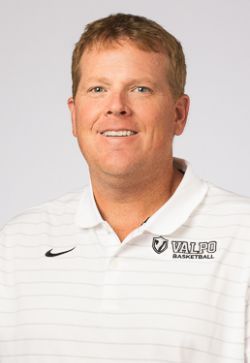 Matt Bowen completed the fifth season of his second stint on staff at Valpo in 2021-2022. He moved back into an assistant coaching role for the 2019-2020 season after serving as the Director of Basketball Operations/Special Assistant to the Head Coach in 2018-19.

Bowen, who coordinates the team’s offensive efforts, helped Valpo finish fourth in the Missouri Valley Conference in free-throw percentage (.759), field-goal percentage (.459) and assists per game (12.5) while finishing third in assist/TO ratio (1.1) in 2021-22. Several Beacons unlocked noteworthy offensive achievements under Bowen’s watch, including Kevion Taylor scoring his 2,000th career point, a pair of Valpo players finishing in the top eight in the MVC in field-goal percentage and Ben Krikke finishing as one of three MVC players with a field-goal percentage of 50 percent or better and a free-throw percentage of 80 percent or better. Freshman walk-on Preston Ruedinger finished as the only player in the nation with 30 or more assists and fewer than 10 turnovers.