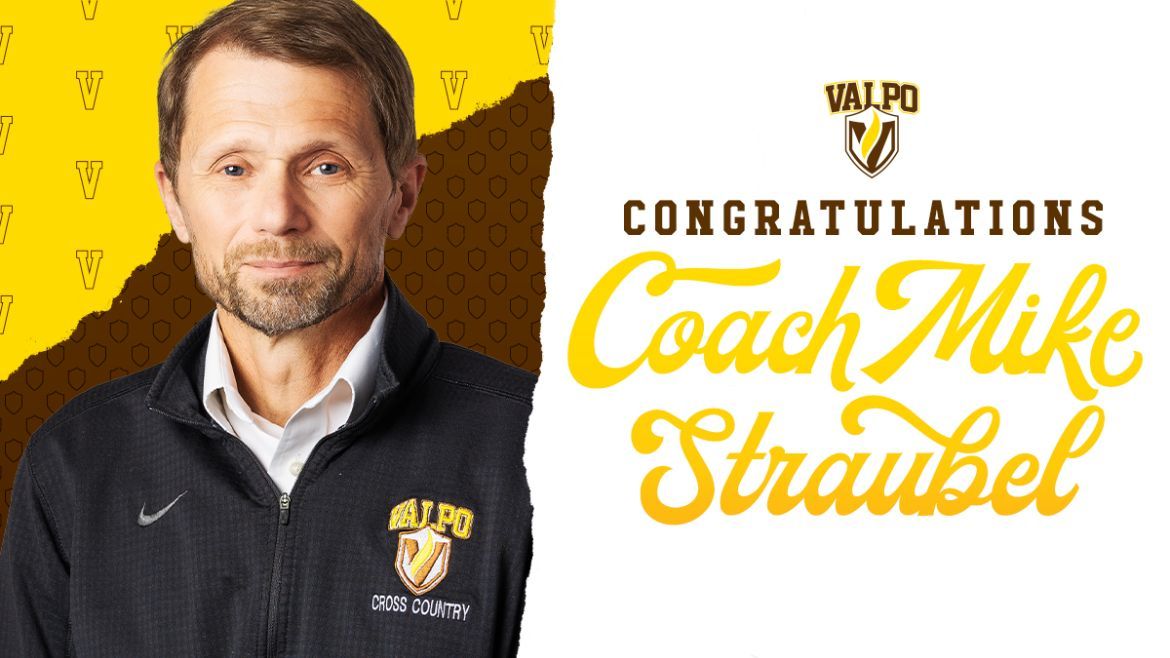 When Mike Straubel reflects on his 35-year run as the head coach of the Valparaiso University men’s and women’s cross country programs, he will never forget the look of pure joy on a student-athlete’s face after running a personal record or completing an individual achievement.

Those rewarding moments coupled with a total commitment to the student-athlete experience have kept Straubel coming back year after year. But now, the time has come for the most difficult decision of his long coaching tenure at Valpo. Straubel has announced that he will retire, effective following the team’s NCAA Great Lakes Regional meet on Nov. 12.

“The most rewarding aspect of the job is helping the student-athletes improve and find success,” Straubel said. “Seeing someone’s reaction after running a PR never gets old. It’s so rewarding to see someone finish a race and feel good about the way they ran. When I receive notes from alumni and they thank me for creating a good experience and a good atmosphere, that’s part of why it’s so hard to leave. When you recruit someone to come here, you feel a commitment to see them through their career and make sure they have a good experience.”

Straubel arrived on Valpo’s campus in 1985 and began teaching in the law school, a career that would span over three decades. In the spring of 1987, he joined the track & field staff as an assistant coach. When men’s cross country head coach Drew Pringle resigned shortly before the start of the fall 1987 season, Straubel told then Director of Athletics Bill Steinbrecher that he was interested in the job. Also in 1987, the University added the sport of women’s cross country, making Straubel the first — and still only — head coach of the women’s program. The University temporarily discontinued the track & field program, and when it returned in the mid-1990s, Straubel spent one season as the track & field head coach while continuing his cross country duties. He has been an assistant coach on the track & field staff ever since, leading the distance runners.

“When Mike expressed interest in becoming the Valpo cross country coach, he was a relative newcomer on the law school faculty,” Steinbrecher said. “I was concerned that the additional burden of coaching might jeopardize his chances of solidifying his goal of becoming a permanent professor in Valpo’s school of law. He was willing to take that chance, and indeed he excelled in both areas. Some distance coaches sit in their offices and send their runners out to run the routes planned for them on the roads and/or trails. Others ride a bicycle along with their runners. Not Mike, he could always be seen running along with his teams, probably even setting the pace, which is very impressive. Valpo has been fortunate to have this man as our coach all these years.”

The Valpo mentor has seen his cross country runners total 48 all-league awards, 10 all-Indiana honors, six all-Region commendations, three Runner of the Year awards and two Newcomer of the Year distinctions. He also coached Valpo Athletics Hall of Famers Laura Rolf, Collette Liss and Aaron Crague before recently instructing Alexander Bruno to perhaps the most accomplished career in the history of the men’s program. Bruno shattered program records for the 8K and 10K and was a conference champion in track & field in the mile at the 2020 Missouri Valley Conference Indoor Championships.

In the Valpo men’s cross country record book, the top 10 times in the 10K have all come during the Straubel Era, and eight of the top 10 in the 8K have occurred during his tenure.

“Mike Straubel personifies the Valpo Experience as an individual who spent over 30 years investing time in student-athletes and assisting them to be their best in both competition and the classroom,” Director of Athletics Mark LaBarbera said. “He has coached All-Americans and All-Conference athletes to high levels of performance while maintaining a commitment to the improvement of every young person in the program. He did this while being a nationally respected sports law expert as a member of the law school faculty. We are deeply appreciative of his service to Valparaiso University, Valpo Athletics and all of the young people that he has coached and mentored.”

In 2006, the women’s team had the lead in the Mid-Continent Conference Championship with a half of a mile remaining, but a few runners changed positions and Valpo placed second, just three points shy of first, one of the most memorable team performances in program history.

Liss continued her career at the professional level after graduating from Valpo as she signed a Nike contract. She made two World Championship teams for the United States in cross country and two in indoor track & field. In the 2000 Olympic Trials, Liss led the field through three laps, but faded in the fourth lap and narrowly missed qualifying for the Olympics.

“To have someone make the Olympic Trials and be in contention for the Olympic team was a big accomplishment for the program,” Straubel said. “I watched that one on TV, and had the opportunity to see her race professionally in person on several occasions. Those are moments I’ll always remember.”

Straubel’s program has also produced countless individuals who have gone on to professional success as doctors, faculty members and in a wide-ranging variety of fields. His impact on the lives of Valpo student-athletes will be fondly remember by his friends and colleagues.

“It’s really rare that you find a coach who spends his entire career at one school, especially doing it for as long as Mike has,” Valpo head track & field coach Ryan Moore said. “He helped shape our cross country program and has built toward the successes the program has enjoyed in recent years. There’s a long list of runners who have had incredible success under Mike. Valpo has been so fortunate to have someone who puts so much time and energy into coaching while balancing his other career as a law professor. That’s a testament to how much he loves the sport itself. Mike will be missed, and we’re going to celebrate the impact he’s had on thousands of young people at Valpo.”

The successes in competition under Straubel’s watch are numerous, but when asked to recount his favorite memories at Valpo, the first story he shared was about the aspect of his job that he cared about the most — the student-athlete experience.

“We always have a season-ending team dinner held at my house,” Straubel said. “I ask everyone to share their best memory of each graduating senior. It’s very fulfilling to hear the athletes talk about what they’ll remember most about their teammates. That stands out to me on a large scale.”

Straubel possesses a strong interest in the science behind the sport of cross country. One key ingredient to his ability to help student-athletes consistently improve their performances for three and a half decades on Valpo’s campus was his knowledge of the human body and commitment to continued learning.

“If you’re helping someone try to get faster, you’re working with the human body, and that is incredibly complex,” Straubel said. “If you’re trying to get the body to physically perform better, it takes a lot of understanding. That’s something I learned over the years. It has gotten more and more complex to figure out how to put together a good training program to get someone faster; it’s not just about running more miles. Being a head coach in this sport requires someone who cares about the experiences that the athletes have and someone who has a deep passion for learning how to get people to run faster.”

A lifelong involvement in athletics began when Straubel competed in football, basketball, volleyball and tennis during his younger years. His coaching days date back to his time as a high school senior, when he helped coach the girls volleyball team. He was a member of a very serious club volleyball team during his undergraduate tenure at Western Michigan, which concluded in 1979. During his freshman year of college, Straubel coached the tennis team at his high school alma mater to a state championship with a near-perfect score. The team had also won the state title the previous year, when Straubel was a senior and team captain.

When he continued his education at Marquette Law School, Straubel attempted to play tennis, but the coach did not allow him to do so because he was a graduate student. Since he had been running to stay in shape for tennis, Straubel told the track & field coach that he’d like to run the 800. He ended up competing in the long jump and triple jump for two years at Marquette, then went to McGill University in Canada to continue his education and ran both cross country and track & field. When he reached his 40s, Straubel switched to triathlon and was nationally ranked.

When he begins his retirement from coaching, Straubel may resume racing for the first time in two years in an effort to qualify for the World Championships. He was also a ranked tennis player and could get back into tennis during his coaching retirement. He has several writing and research ideas that will keep him busy in the months and years to come.

Straubel’s wife is retired and lives in Kalamazoo, Mich., and those family considerations played a significant role in his decision to retire.

“It’s time for me to make sure that my wife is not on her own during the week any longer,” Straubel said. “I am going to take a month or two to get settled and figure out what I want to do next. I’m looking forward to training more myself and getting back to competing more frequently. It’s very hard to leave with athletes in the middle of their careers, but that would always be the case. I hope I was able to give the athletes a sense of accomplishment, help them get better and make sure they enjoyed learning and working hard, and I hope to do everything I can to help make this a smooth transition.”