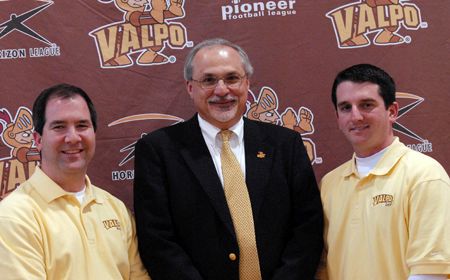 At a news conference held on campus this afternoon, Director of Athletics Mark LaBarbera announced that men’s and women’s golf and women’s bowling will be added to the lineup of NCAA-affiliated programs.

The golf teams will compete in NCAA Division I.  Women’s bowling, which has crowned an NCAA national champion since 2004, is offered in a single division.  All three sports will offer scholarships within NCAA guidelines.

Home course for the golf teams will be The Course at Aberdeen and home for the bowling team will be Inman’s Recreation Center, both in Valparaiso.

“The decision to add these three teams to our intercollegiate athletics program was driven largely by student interest,” LaBarbera said.  “I regularly receive inquiries from prospective student-athletes about golf and bowling, and interest has been expressed by students currently enrolled as well.”

Mike Higdon, director of golf at Aberdeen, will head the golf program and Stephen Anthony, associate director of athletics for business services, will coach the women’s bowling team.

Two of the sports actually are being revived after an absence of many years.  Men’s golf was an intercollegiate sport from 1934 through 1992 and there was a men’s bowling team that competed in intercollegiate events from 1948 to 1963.

Although Valpo has not previously fielded a women’s golf team Patti Shook Boice, a 1965 graduate, won the individual title at the women’s National Collegiate Golf Tournament in 1964.  Regarded for several years as one of the top women amateurs in the nation, she played in 10 United States amateur championships.

When LaBarbera told Boice of plans to field a women’s team on campus, she said she looks forward to following the team.  “I’m thrilled that fellow talented golfers will be able to follow their sport to Valparaiso and join the Valpo family—a community founded on Christian principles that we all hold dear to our heart,” said the Spring Lake, Mich., resident.

LaBarbera said he expects the Crusaders to field competitive teams in all three sports in their first seasons.

“There are many outstanding young golfers in the Valparaiso region and throughout the Midwest who are interested in competing in golf on the college level,” he said.  “Women’s bowling is rapidly growing in popularity and we have some of the best high school bowlers in Indiana right in our backyard, so we should be an attractive option for many of them as they consider their college choices.”

LaBarbera said the decision to add three sports to the athletics program was made easier by the cooperation of officials at the Course at Aberdeen and Inman’s.

“We are thrilled to be hosting the golf teams at The Course at Aberdeen,” said Barb Young, president of the 18-hole links-style public course.  “I think golf is a perfect fit for a school like Valpo.  We are proud to have Mike Higdon, our director of golf, running the program and we look forward to celebrating Valparaiso’s first Horizon League golf championship.”

“Within the past decade, Inman’s has assisted in developing local high school bowling programs,” said Mike Peuquet, President of Inman’s.  “Since then, the high school program has accumulated enough interest to become a recognized statewide club sport.  Inman’s is proud to be working with Valparaiso University in developing its NCAA women’s bowling program and proud to have the Crusaders bowling in our facility and to help support the program.  This is a great opportunity for the local bowling club members to further their academics and passion for the sport of bowling.”