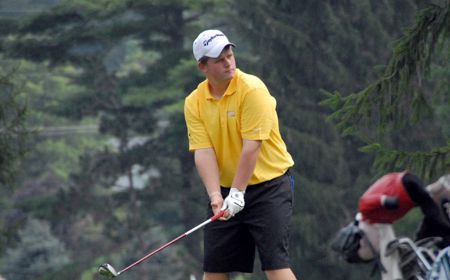 Michael Hesselman teed off first for Valpo as the Crusaders began the 2009-10 season. The transfer is third after shooting 72. (Ray Acevedo)
Related Links

The Valparaiso University men’s golf team began play for the first time since 1992 on Tuesday afternoon at the Saint Joseph’s College Championships at Plymouth Country Club in Plymouth, Ind. and stand in second place following the opening 18 holes.

The Crusaders turned in a team score of 302 (+22) for their first competitive round, and trail Lewis by just seven strokes (295) heading into Wednesday’s final 18 holes.  Bethel (Ind.) is five shots behind Valpo at 307.

“Overall for our first round I thought we played pretty well,” head coach Mike Higdon said afterwards.  “Everyone is confident that they can make up the seven shots tomorrow after leaving a few shots out on the course today.”

“My goal was to use four scores in the 70s, and we had three today,” Higdon added.

Valparaiso will return to the links on Wednesday morning for the final round of the tournament.  Tee times begin at 8:30 a.m. CDT with the Crusaders teeing off starting at 9:10 a.m.