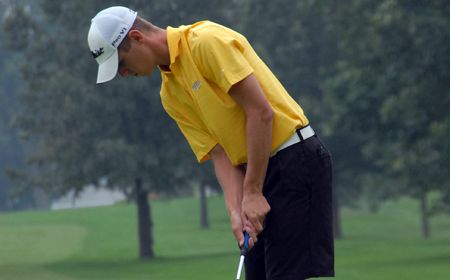 Playing in a 54-hole tournament for the first time this season, Valparaiso completed the first two rounds of the John Piper Intercollegiate Championships on Monday afternoon in Bowling Green, Ohio and sits in 10th place entering Tuesday’s final round.

The Crusaders put together a solid opening round on Monday morning, shooting a team score of 304 (+16) over the 7,064-yard, par-72 Stone Ridge Golf Club layout.  Josh Kalita (Chesterton, Ind./Chesterton H.S.) led the way in the morning round, shooting a three-over par 75 to sit in 22nd place.  As a team, Valpo entered round two in ninth place, just seven shots out of fourth.

The afternoon proved a little tougher for the Crusaders, as they slipped a spot in the standings with a team total of 312 for a two round score of 616 (+40).  Valpo enters the final round just one shot behind Ohio University for ninth.

“We’re going to take some positives out of today, but the second round was a little rough,” head coach Mike Higdon said afterwards.

“We learned where we stand compared with other division one schools today,” Higdon added.  “We’re going to try and turn tomorrow into a one day tournament and see what happens.”

Tournament host Bowling Green and Green Bay enter the final round tied for the team lead at 581 (+5) while Green Bay’s Austin Ehlenfeldt is the overall leader at 139 (-5).

The final round of the tournament will take place on Tuesday morning with a shotgun start beginning at 7:30 a.m. CDT.