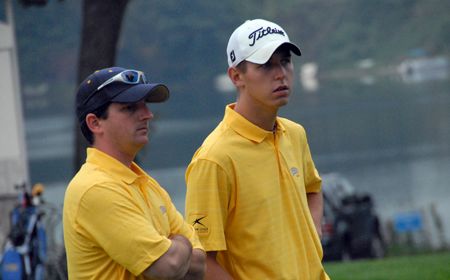 All four scoring rounds for the Crusaders were 76s on a wet course after the round was delayed by more than four hours due to morning rain.  Valpo shot 304 as a team to finish at 943 for the tournament.  Detroit won the team title shooting 875 for three rounds over the 7,032-yard, par-72 layout.

“I was glad to see the guys come back and work hard after the first two rounds and not give up,” head coach Mike Higdon said.  “We bettered our top round of the tournament by 14 shots, playing solid all day.  As I said all year, when we can count four scores in the 70s I can’t complain.”

Josh Kalita (Chesterton, Ind./Chesterton H.S.), who shot 81 in the final round, finished third in the tournament for the Crusaders, posting a three-round total of 238.  Brad Winters (Elgin, Ill./Elgin H.S.) and Adam Gray (Portland, Ind./Jay County H.S.) carded 76s as well on Tuesday to finish at 241 and 242 respectively.

Youngstown State’s Ryan Stocke won the individual title after shooting a final round 68 to finish at one-under part 215 (73-74-68).

“We know as a team we have work to do for the summer, but we showed that we can hang with the other scores in our conference in just our first season," Higdon added.  "Our guys are already looking ahead to the fall.”