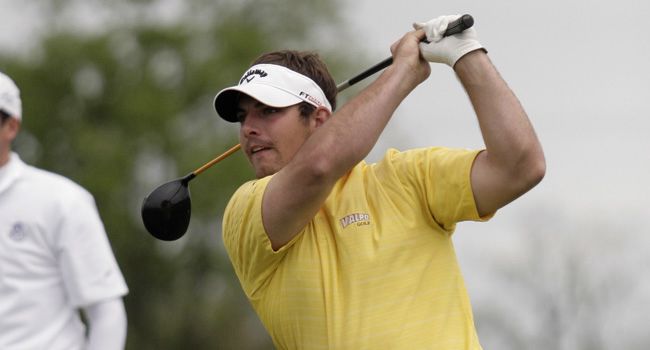 Kyle Henning (Brookfield, Wis./East H.S.) carded a three-under par 69 on Sunday to lead Valparaiso as the Crusaders moved up five spots in the team standings to finish in fourth place overall at the Fossum Invitational at Forest Akers Golf Course in East Lansing, Mich.

“This was a total team effort today,” head coach Dave Gring said.  “We talked at breakfast about if we could turn in a score in the low 290s we thought we could move up a few positions.  This was just tremendous.  We opened the tournament with a tough first round but really bounced back and finished strong.  I’m proud of the guys.”

Henning matched his collegiate best with his three-under par 69 on the 7,013-yard, par-72 layout.  He tied for third overall at plus two with a 218 total.

“Kyle played very steady all day,” Gring added.  “He had 16 greens in regulation and putted well.  It was an all-around solid round of golf.”

Andy Webb (Bedford, Ind./North Lawrence H.S.) shot a career-best round of 71 to finish at one-under for the day at and a 54-hole tournament total of 224.  Brad Winters (Elgin, Ill./Saint Edward H.S.) and Thomas Wettstein (Neenah, Wis./Xavier H.S.) both finished the event at 229 after posting a 74 and 75 respectively on Sunday.

Joe Harris (Washington, Iowa/Washington H.S.) added a 75 as well to conclude his first collegiate tournament while Eric Winters (Elgin, Ill./Saint Edward H.S.), also a freshman, added a 79 in the final round.

“This was a great way to start the season,” Gring concluded.

Valparaiso will take a week off before returning to the links Sept. 17 and 18 at the UK Bluegrass Invitational in Lexington, Ky.