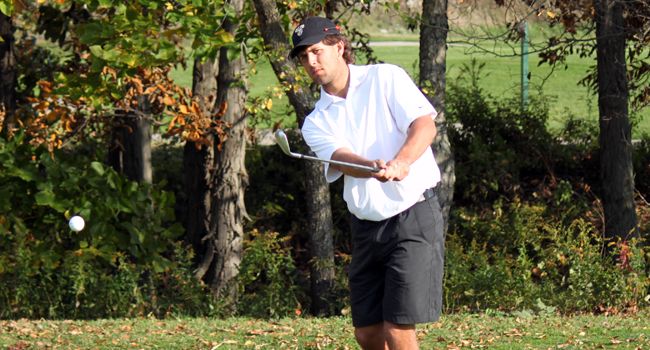 Joe Harris opened the season with a round of 71.
Related Links

The Valparaiso men's golf program took to the links for the first time since competing in the NCAA Tournament last spring on Monday, playing the first two rounds of the 54-hole Battle in the Tetons, hosted by Weber State at Headwaters G.C. in Victor, Idaho.

The Crusaders finished Monday's action in seventh place out of the eight participating teams, shooting rounds of 299 and 298 for a 36-hole total of 597. But Valpo sits just three shots out of fifth place and are still easily within striking distance of third position, just nine strokes back. Utah Valley leads the team standings with a 577 score through two rounds.

“The continuous rain most of the day made the 36 holes challenging, but the guys played hard and our scores were quite consistent,” said Crusader head coach David Gring. “It felt good to get the fall season started, and we enjoyed playing in a beautiful part of the country.  The guys are looking forward to our final round,tomorrow.”

Freshman Peter Webb (Madison, Wis./James Madison Memorial) got his Crusader career started on a stellar note on Monday, opening with an even-par 72 in his first round and then improving by one stroke in the second 18 holes, shooting a round of 71 to close the day at one-under 143, tied for fourth place and just two strokes off the leader. Junior Joe Harris (Washington, Iowa/Washington) sat in second place after the opening round after shooting a one-under 71 and through two rounds is tied for 13th with a score of 147.

“Peter Webb had an outstanding start to his freshman season,” said Gring. “ His ball striking was wonderful, and he played very solid all day.”

Senior Kyle Henning (Brookfield, Wis./East) posted matching rounds of 75 and sits in a tie for 21st position with a 150 score, while junior Eric Winters (Elgin, Ill./St. Edward) shot rounds of 81 and 76 to end the day at 157, in 39th place. Senior Thomas Wettstein (Neenah, Wis./Xavier) rounded out the Crusaders' five-man team with a score of 161, tied for 45th place.

Valparaiso returns to the course Tuesday morning to close out the opening tournament of the fall campaign.