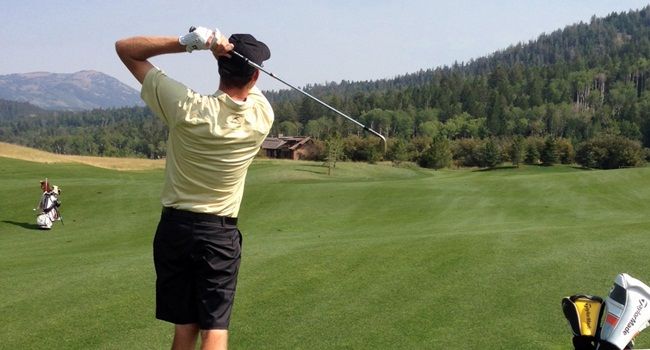 Freshman Peter Webb (Madison, Wis./James Madison Memorial) became just the third player since the program's revival to finish a 54-hole tournament under par, while senior Kyle Henning (Brookfield, Wis./East) matched the program record for best single-round performance in relation to par as the Valparaiso men's golf team closed out action Tuesday at the Battle in the Tetons at Headwaters G.C. in Victor, Idaho, hosted by Weber State.

“The team improved in score and ball striking in each of the three rounds,” said Crusader head coach David Gring. “For the first tournament of the year, I was pleased with how our guys played. We had three rounds under par this tournament, and Kyle and Peter had terrific rounds today.”

The Crusaders posted their best team round of the tournament on Tuesday to close the event, posting a round of 292 to finish with a 54-hole total of 889, tying South Dakota State for sixth place. Valpo finished just nine strokes back of fourth position.

Webb proved to be consistent for the Crusaders over the course of the tournament, finishing on Tuesday with his second straight round of 71 to post a final 54-hole total of 214 (-2), good for a tie for third place. It marks Valpo's second-best 54-hole score in relation to par, just one stroke off the 3-under record set last year. Webb shot par or better in each of the tournament's three rounds, was one of just three players in the tournament field to go under par on the par-4s and finished tied for second in the field with 12 birdies.

“Peter demonstrated a balanced, consistent performance all tournament,” said Gring. “He will be an impact player for us all year. I'm happy for him that he was able to start his collegiate career with such a great tournament.”

Henning produced one of the top rounds in program history on Tuesday to leap up into a 12th-place finish at 218 (+2). The senior tied for the second-lowest round of the day, carding a 68. The four-under-par round ties for the best round in relation to par in program history and is tied for second in overall score. Henning ended the tournament tied for third in the field in his performance on par-5s (-6) and was one of just three players to card multiple eagles.

Junior Joe Harris (Washington, Iowa/Washington) ranked third on the team, placing in a tie for 25th with a final score of 225 (+9) after a 78 on Tuesday. Junior Eric Winters (Elgin, Ill./St. Edward) finished in a tie for 39th position, closing the tournament with a round of 77 for a cumulative score of 234, while senior Thomas Wettstein (Neenah, Wis./Xavier) rounded out the Crusader quintet by finishing in 45th place with a 54-hole score of 237, including a Tuesday round of 76.

Valparaiso returns to the links early next week at the Golfweek Program Challenge in Pawley's Island, S.C.