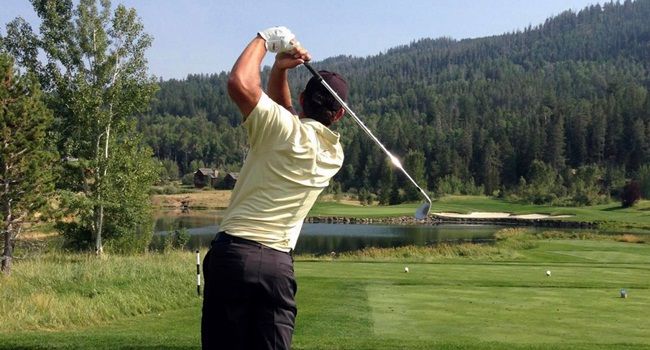 Joe Harris is in a tie for third after two rounds.
Related Links

The Valparaiso men's golf team finds itself in solid position to make a run at its first victory of the season, as the Crusaders sit in a tie for first place after 36 of 54 holes at the John Piper Intercollegiate in Bowling Green, Ohio at Stone Ridge G.C.

The Crusaders carded team rounds of 285 and 292 on Monday on the par-72, 7,064-yard layout, giving them a score of 577 (+1) with one round to play. Valpo is tied with Marshall atop the team leaderboard, clear of Green Bay by three strokes and the host Falcons by four shots. The Crusaders' opening round of 285 marks the third-lowest single-round performance as a team in program history, both in overall score and in relation to par (-3).

“For our third tournament of the fall season, I'm very pleased with the consistency that our team showed today,” said Crusader head coach David Gring. “The depth of our team was evident today, with all seven guys playing well for us. We had a lot of birdies today, with Joe Harris having twelve birdies, and a couple other players having eight birdies. The team gained a lot of confidence today with our scoring, and we have the ability to shoot under par each round.”

Junior Joe Harris (Washington, Iowa/Washington) proved to be Valpo's top golfer on Monday, opening the tournament with a round of 68 (-4), the second-lowest round in relation to par and the third-lowest in total strokes in program history. He followed with a 73 to close the day at 141 (-3) with 18 holes to play, good for a tie for third place. Freshman Nick Seitz (Xenia, Ohio/Carroll) shot rounds of 71 and 72 to end the day in a tie for eighth place at 143 (-1).

“Joe played very steady for us all day, and he knows that he is capable of shooting in the 60's,” said Gring. “His ball-striking was exemplary.”

Redshirt sophomore Jared Magoline (Fond du Lac, Wis./Fond du Lac [Marquette]), playing his first competitive tournament as a Crusader, posted rounds of 72 and 74 and is tied for 13th at 146. Freshman Peter Webb (Madison, Wis./James Madison Memorial) is two strokes back of Magoline at 148, following a pair of rounds of 74 on Monday, while senior Thomas Wettstein (Neenah, Wis./Xavier) improved by 10 shots in his second round and enters Tuesday sitting on a score of 156.

The Crusaders also had two golfers playing as individuals on Monday. Junior Eric Winters (Elgin, Ill./St. Edward) shot a one-under 71 in his opening round and enters the final round at 147, in a tie for 17th place. Sophomore Matt Ward (Plainfield, Ill./South) posted a score of 156 through two rounds as well.

Valparaiso closes out the John Piper Intercollegiate with 18 holes on Tuesday.

“We were tied for the lead in five tournaments last year, going into the last round, and we won three of them,” said Gring. “We are looking forward to tomorrow's final round.”