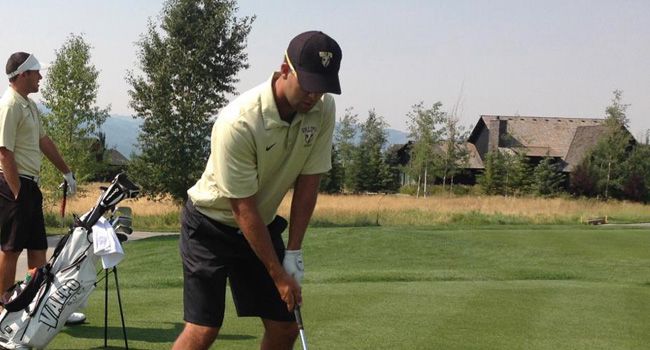 Joe Harris is tied for the lead after day one at the John Dallio Memorial.
Related Links

Junior Joe Harris (Washington, Iowa/Washington) finds himself in a tie for the lead at the John Dallio Memorial through 36 holes of the 54-hole event, held at Ruffled Feathers G.C. in Lemont, Ill. Valparaiso is tied for sixth place in the team standings through Saturday's action.

Valpo opened the tournament with a team round of 312 Saturday morning, but improved by eight shots in the afternoon, posting a middle-18 score of 304 to end the day at 616, tied for sixth place with Seton Hall. The Crusaders were one of just two teams to improve from the first round to the second round, as the average individual score went up over two strokes. Missouri State leads the team standings, entering Sunday's final round with a score of 597.

"We really struggled in our first round of the day, especially on the back nine," said Crusader head coach David Gring. "Our putting was poor, and the execution of important shots was not there. The guys bounced back with the second-best score of the afternoon round, and we have something positive to build on."

Harris started the tournament innocuously enough, shooting an opening-round 75, but came back with a 71 in the afternoon, one of just two sub-par rounds in the second round over the par-72, 6,898-yard circuit. Harris' score of two-over 146 leaves him tied with SIU Edwardsville's Dalton Charboneau heading into the final 18 holes on Sunday.

"Joe had one of his best 36-hole scores of the fall season, with no three-putts and no double bogeys," said Gring. "He was extremely consistent throughout the entire day, and played very strong for us."

"Ruffled Feathers Golf Club is a demanding golf course, and while the temperatures and conditions were ideal, the wind presented a challenge for us today," said Gring. "We are looking forward to the final round tomorrow."

Valparaiso closes out the John Dallio Memorial on Sunday morning with the final 18 holes of the tournament.