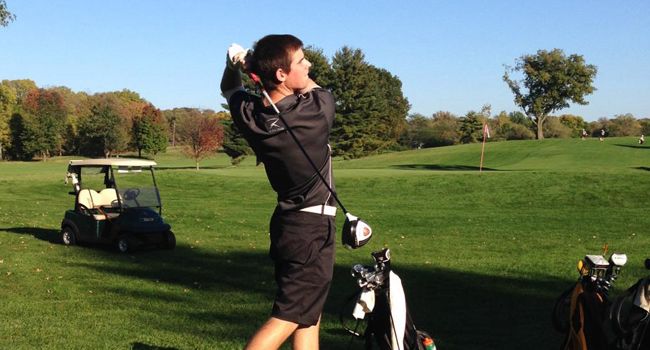 Eric Winters shot Valpo's best round on Monday with a 72.
Related Links

The Valparaiso men's golf team continued the 2013 fall campaign on Monday with the opening round of the 54-hole Dayton Fall Invitational at NCR in Dayton, Ohio, finishing the first 18 holes in 11th place.

The Crusaders posted an opening-round 297 as a team on Monday, closing the round in 11th place out of the 16 competing teams. However, Valpo sits just nine shots out of a tie for second entering Tuesday's action.

Senior Kyle Henning (Brookfield, Wis./East) was one shot behind Harris on Monday, finishing the day tied for 46th place after an opening-round 75. Freshman Peter Webb (Madison, Wis./James Madison Memorial) was one shot further back, shooting a 76 to tie for 51st place, while senior Thomas Wettstein (Neenah, Wis./Xavier) is tied for 76th place after a first-round 79.

Valpo also has a pair of golfers playing as individuals at Dayton. Sophomore Michael Holevas (Elgin, Ill./St. Edward Central Catholic) shot an opening-round 74 and is tied for 32nd place, while redshirt sophomore Jared Magoline (Fond du Lac, Wis./Fond du Lac [Marquette]) is tied for 59th place after a 77 in the first round.

Valparaiso will conclude the Dayton Fall Invitational on Tuesday with the tournament's final 18 holes.