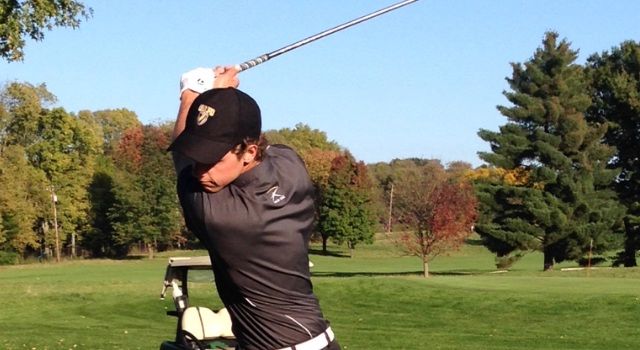 Jared Magoline shot 75 in both rounds on Monday.
Related Links

Facing tough scoring conditions on Monday at the Beu/Mussatto Invitational, hosted by Western Illinois, the Valparaiso men's golf team persevered, finishing the day in fourth place out of the 13 competing teams through two of the event's three rounds.

"We played through some intense wind today, gusting close to 40 mph,” said Crusader head coach David Gring.  "The guys played smart and they played hard through those conditions.  It is an endurance test, when it comes to 36 holes and playing in that type of wind.  The effort was very strong today."

The Crusaders posted team rounds of 304 and 314 on Monday in the first two rounds, with a total score of 618 good for fourth place in the 13-team field, just five strokes out of second place. Bradley leads the team standings at 609, while Samuel Matthew of South Dakota sits atop the individual standings at 145.

Redshirt sophomore Jared Magoline (Fond du Lac, Wis./Fond du Lac [Marquette]) led the way for the Crusaders on Monday with a consistent performance, posting matching rounds of 75 to end the day at 150, good for a tie for third place.

"Jared Magoline displayed his mental toughness today, with steady ball-striking and a very efficient short game in the windy weather," said Gring. "He never let the conditions bother him, and was unwavering in his shot-making decisions."

A pair of Crusaders ended the day at 154, finishing up 36 holes in a tie for 12th place. Senior Kyle Henning (Brookfield, Wis./East) shot an opening-round 74 en route to his 154 total on Monday, while freshman Nick Seitz (Xenia, Ohio/Carroll) recorded a pair of rounds of 77 to close the first 36 holes tied with Henning.

Junior Eric Winters (Elgin, Ill./St. Edward) enters Tuesday's final round tied for 47th place with a score of 162 through two rounds, while freshman Peter Webb (Madison, Wis./James Madison Memorial) is one shot back of Winters in a tie for 51st position. The Crusaders also had two solid performances from golfers playing as individuals in this tournament, as junior Joe Harris (Washington, Iowa/Washington) matched the performance of Henning and Seitz, going 75-79 to end the day in a tie for 12th place. Senior Thomas Wettstein (Neenah, Wis./Xavier) is tied for 23rd position through 36 holes with a score of 157 as well.

"I was pleased with the depth in our lineup, with two of our individuals posting solid scores, and four of our guys in the top-12 individual players," said Gring. "We have a great opportunity to play well tomorrow and finish towards the top of the 13-team field."

Valparaiso will close out the Beu/Mussatto Invitational on Tuesday with the final 18 holes of the tournament.