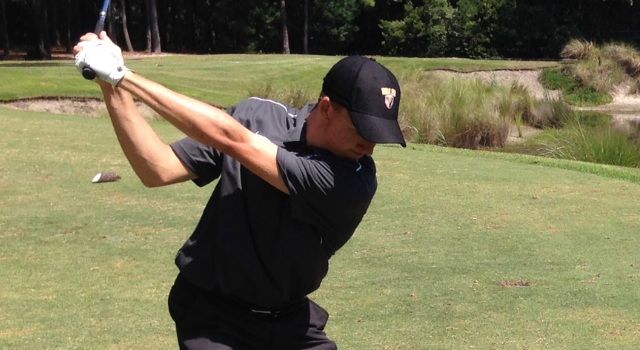 Nick Seitz posted a round of 72 on Tuesday.
Related Links

The Crusaders shot a team round of 307 on Tuesday to close out the 54-hole event at 925, good for fifth place among the 13 competing teams and just four strokes out of third position. Bradley won the team title with a team total of 913, while Chicago State's David Keenan earned the individual victory by shooting a 219.

“The team played really hard over the past two days and our off-season work has been paying off early in this spring season,” said Crusader head coach David Gring. “I'm pleased with where we are at as a team, and we are improving in many facets of our game with every tournament.”

Freshman Nick Seitz (Xenia, Ohio/Carroll) shot an even-par round of 72 on Tuesday, matching the second-lowest round of the day among the 81-golfer field, to close the tournament at 226, good for seventh place. Redshirt sophomore Jared Magoline (Fond du Lac, Wis./Fond du Lac [Marquette]) finished the event at 229 after a final-round 79, placing tenth overall and earning his first top-10 finish as a Crusader.

“Nick has had a terrific start to the spring season, and played absolutely outstanding golf this tournament in cold temperatures and wind all 54 holes,” said Gring. “His course management was tremendous, playing this golf course for the first time. Our depth is evident, with another player on our team posting our low individual score this tournament. We will build on that as we work towards our next tournament.”

Senior Kyle Henning (Brookfield, Wis./East) finished one shot back of Magoline in a tie for 11th at 230 as he closed out the tournament with a 76 in the final round. Junior Eric Winters (Elgin, Ill./St. Edward) rounded out the Crusader team with a score of 242 over the 54 holes, good for a tie for 44th position. Playing as individuals, junior Joe Harris (Washington, Iowa/Washington) finished in a tie for 25th at 235, while senior Thomas Wettstein (Neenah, Wis./Xavier) was two shots back of Harris at 237, tied for 30th place.

Valparaiso returns to action in Lexington, Ky. at the Bluegrass Invitational in two weekends, as the two-day tournament kicks off on Saturday, Apr. 12.