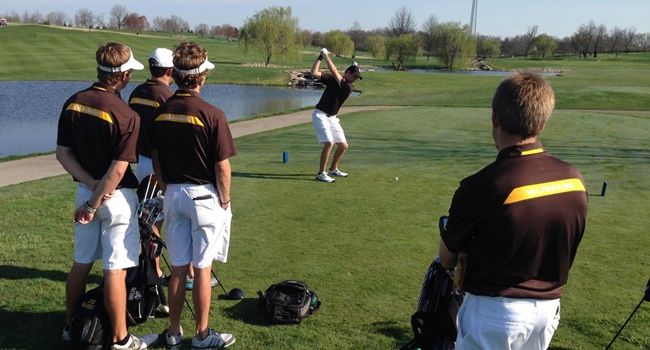 The Valparaiso men’s golf team continued its 2014 spring campaign with the opening 36 holes of the Bluegrass Invitational at the University Club Big Blue Course in Lexington, Ky. on Saturday, with the Crusaders finishing the day in a tie for seventh place.

“There was a lot of good golf played today, with some strong performances by a number of the guys,” said Crusader head coach David Gring.  “We have been improving our play each round and each tournament as the spring season is progressing.”

Valpo posted rounds of 292 and 296 on Saturday to finish the day with a team score of 588, tied for seventh place out of the 13 competing squads and just one stroke back of sixth position.  Host Kentucky leads the team standings at 563, while Louisville’s J.D. Lehman and Auburn’s Matt Gilchrest are tied for the individual lead at 136.

Senior Kyle Henning (Brookfield, Wis./East) paced the Crusaders on Saturday, bouncing back after an opening-round 75 to post a second-round score of 68 (-4), just one stroke off the Valpo single-round record.  Henning’s total of one-under 143 ended the day in a tie for 11th place.  Redshirt sophomore Jared Magoline (Fond du Lac, Wis./Fond du Lac [Marquette]) finished the day at 146 in a tie for 22nd after rounds of 72 and 74.

“I'm excited about some real solid scores by the guys today,” said Gring.  “There was some excellent ball-striking and terrific short-game shots, and we are looking forward to tomorrow's final round.”

Valparaiso closes out the Bluegrass Invitational with the final 18 holes on Sunday.