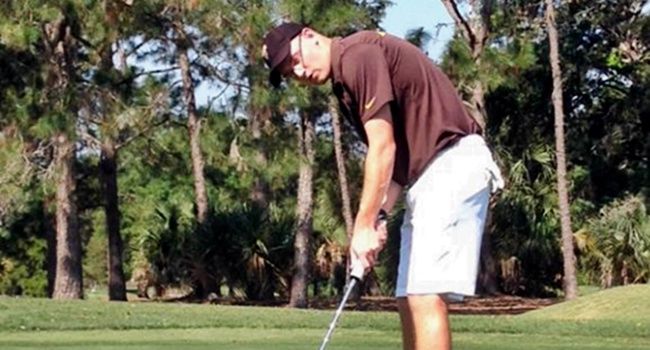 The Valparaiso men’s golf team improved by nine strokes on Saturday in the second day of competition at the 2014 Horizon League Championship from Mission Inn Resort & Club in Howey in the Hills, Fla., and will enter the final day of play in fourth position.

The Crusaders shot a team round of 300 on Saturday and sit at 609 through 36 holes, good for fourth place – just four strokes back of third position.  Cleveland State currently leads the team standings at 593, while the Vikings’ Andrew Bailey tops the individual standings at 142.

“Our par-5 scoring was much improved today, playing the four holes 6-under par,” said Crusader head coach David Gring.  “Our par-3 scoring still was not where we need it to be.  Most importantly, we are going to need to make more critical four, five and six-foot putts to post lower scores tomorrow.”

Crusader freshman Peter Webb (Madison, Wis./James Madison Memorial) shot the best round by a Valpo player on Saturday, birdieing two of the final five homes to come home with a 73, tied for the fourth-best round in the tournament field on the day.  Through 36 holes, Webb is in a tie for 15th place at 154.  Redshirt sophomore Jared Magoline (Fond du Lac, Wis./Fond du Lac [Marquette]) had a steady round on Saturday, making 13 pars en route to carding a 74, leaving him in a tie for ninth position at 151 entering the final round.

Senior Thomas Wettstein (Neenah, Wis./Xavier) continues to pace the Crusader contingent, ending Saturday tied for fifth place at 150 as he shot a round of 76.  Senior Kyle Henning (Brookfield, Wis./East) posted a round of 79 on Saturday to enter the final day in a tie for 19th place at 156, while junior Joe Harris (Washington, Iowa/Washington) improved by 11 shots on Saturday to card a 77 and end the day tied for 28th position.

“The team played the last six holes in even par today – our finish to the round was very solid,” said Gring.  “While we needed that finish yesterday, we learned from it, and played that stretch of holes much more effective today.  Our scoring was improved today over yesterday's round, but we are going to need to hit on all cylinders tomorrow.  We have the ability and the talent on our team, and we are looking forward to the final round.”

Valparaiso closes out the 2014 Horizon League Championship with the tournament’s final 18 holes on Sunday.