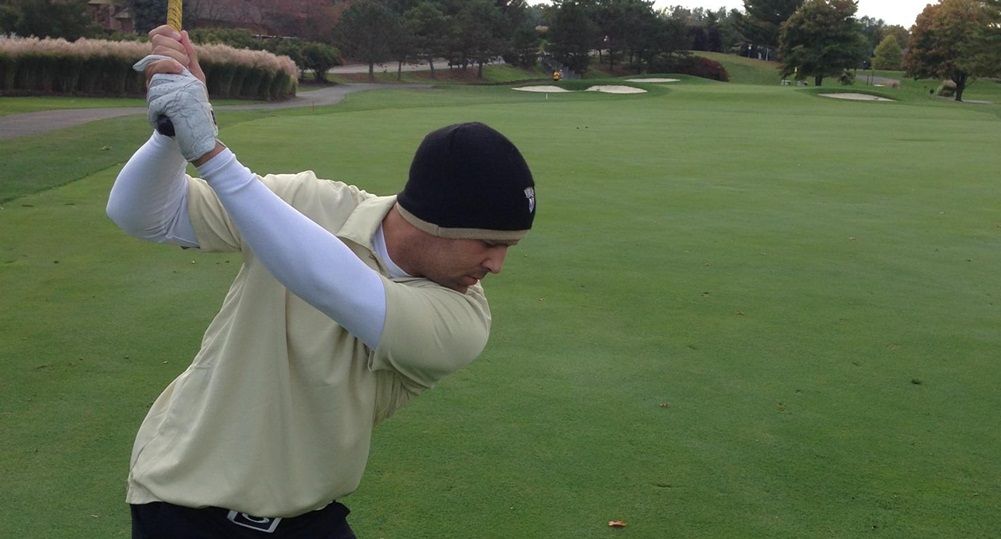 Joe Harris shot a team-best round of 73 Monday.

After two weeks off, the Valparaiso men’s golf team hit the tee box once again, this time taking part in the Dayton Fall Invitational in Kettering, Ohio.  A tough course and hole placements proved to be challenging to all teams involved as no one finished above par as a team.  Valpo, though, has placed itself in the hunt as they finished the first of two 18-hole rounds with a score of 304, only 11 shots back of Xavier.

Coach David Gring talked about how the game plan they formed before the first shot had to change on the fly.  “We talked about getting off to a good start, despite a tough stretch of holes to commence the shotgun start.  Unfortunately, we didn't get the start we needed.”  Gring continued to speak about the corrections the team had to make by saying, “It took some time for us to adjust to the speed of the greens and how the course was set up. Our second nine holes were much better than our first nine.”

The strategy is clear going into day two and its all about where the Brown and Gold can get their balls to land on the green. “Tomorrow, we need to be more sharp with our course management, especially around the greens,” Gring said.  “It's imperative that we get the ball on the right side of the hole, so that we can make higher percentage putts and have less three-putts. We learned a lot today, and the guys are excited to get to it tomorrow.”

On the individual side of things, Joe Harris (Washington, Iowa/Washington) put himself in position for a top finish as he carded a two-over 73, putting him in an eight-way tie for seventh place, only five shots back of the tournament leader.

“Joe Harris had 15 pars today and played very steady for us,” said Gring.  “His ball-striking was terrific, especially with the decent amount of wind during the round. Joe really managed the course very well, playing smart all day.”

The rest of the squad played evenly as they are all bunched up together on the leaderboard.  Peter Webb (Madison, Wis./James Madison Memorial) shot a 76, good for a +5.  Eric Winters (Elgin, Ill./Saint Edward), Nick Seitz (Xenia, Ohio/Carroll) and Jared Magoline (Fond du Lac, Wis./Fond du Lac [Marquette]) followed Webb closely with a 77, 78, and 79 respectively.  Michael Doherty (Lisle, Ill./Naperville North) and Matt Ward (Plainfield, Ill./South) also saw action playing as individuals. Doherty tied Seitz with a +7, while Ward shot an 82 during his round.

The Crusaders will take to the course again for another 18-hole round at the NCR Country Club before heading back home to Valpo. A full recap of the day's events can be found on valpoathletics.com.