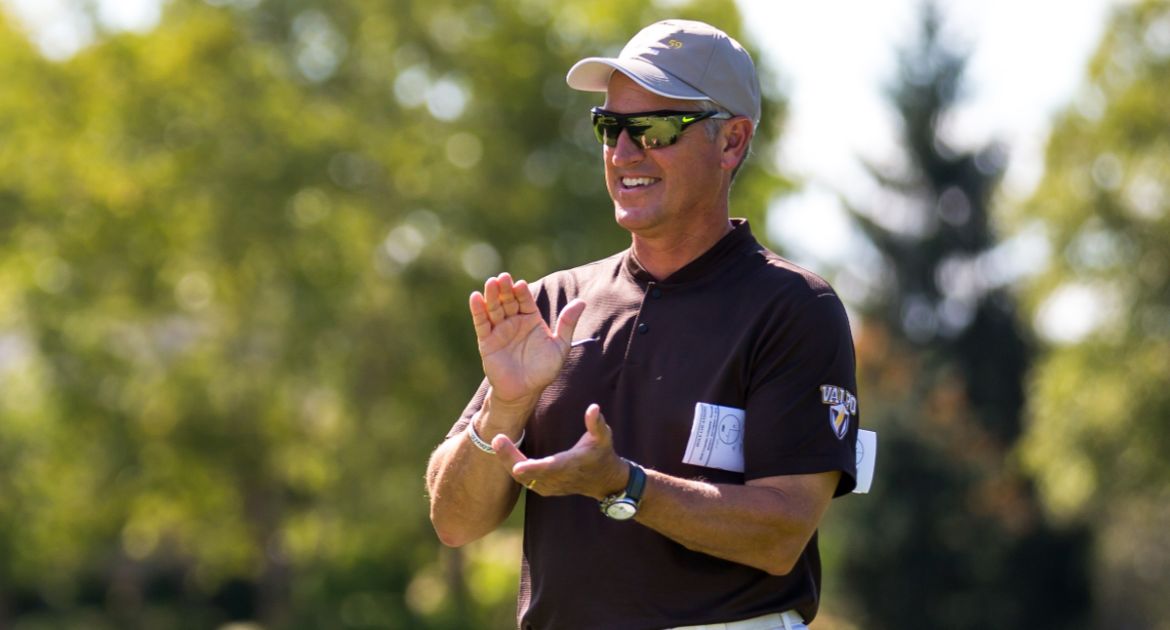 After finishing the 2018-19 season on a high note with a strong showing at the Missouri Valley Conference Championship, the Valparaiso University men’s golf team is set to embark on the 2019-2020 campaign with the bulk of its roster back from last season.

The squad saw just one senior depart via graduation as a talented, young group will soon return to campus to tee off the new season. The first tournament of the year will take place on Sunday, Sept. 1 and Monday, Sept. 2 with the Turning Stone Tiger Intercollegiate hosted by the University of Missouri at Kaluhyat Course in Verona, N.Y.

“The team is super excited and thrilled about getting the 2019-20 season started,” Valpo head coach Dave Gring said. “We will play in 12 tournaments this year in 11 different states, including Florida, Arizona, Colorado, Georgia and New York. We have what I consider to be the most competitive schedule in my nine years as the head coach and the guys are ready to get to it.”

The second of five fall tournaments will take place in Colorado Springs, Colo. with the Air Force Gene Miranda Falcon Invitational at Eisenhower Golf Course on Sept. 6-9. That leads into the team’s home tournament on Sept. 16-17, the Crusader Collegiate at Sand Creek Country Club in Chesterton.

“This will be the fourth year that we have hosted our home tournament at Sand Creek Country Club and our field is full, with 15 teams competing in mid-September,” Gring said. “The golf course is always in amazing shape that time of the year and we will look forward to hosting a field of 90 players participating this year.”

The home tournament will be followed by a trip to West Des Moines, Iowa to compete in the Zach Johnson Invitational hosted by Drake on Sept. 30 and Oct. 1 at Glen Oaks Country Club. The fall will conclude with the Bubba Barnett Intercollegiate hosted by Arkansas State at Ridgepointe Country Club in Jonesboro, Ark. on Oct. 14-15.

“Four of our tournaments are brand new for us this year,” Gring said. “We will look forward to competing at Air Force, Arkansas State, George Mason and Grand Canyon University, with two of those tournaments in the fall and two of them over our spring break. The team always travels well and they are very enthusiastic to get back to school and start practicing and playing.”

The 2020 Missouri Valley Conference Championship will be hosted by Loyola in Flossmoor, Ill. on April 27-28.

During the 2018-19 campaign, Gring coached a youthful team that enjoyed good success while starting two freshmen and two sophomores, setting the stage for a bright future. A pair of freshmen finished first and second on the team in scoring average while both cracking the program’s all-time Top 10 for single-season scoring average. Charlie Toman posted a 73.94 to rank fourth in program history, while Garrett Willis tied for eighth with his 74.52. In addition, a pair of sophomores (Jack Juskow and Brett Seward) completed their second collegiate seasons with career scoring averages that rank in the Top 10 in program history. Willis tied for 10th at the MVC Championship, the highest finish by a Valpo freshman in a league championship since the program resumed in 2009.