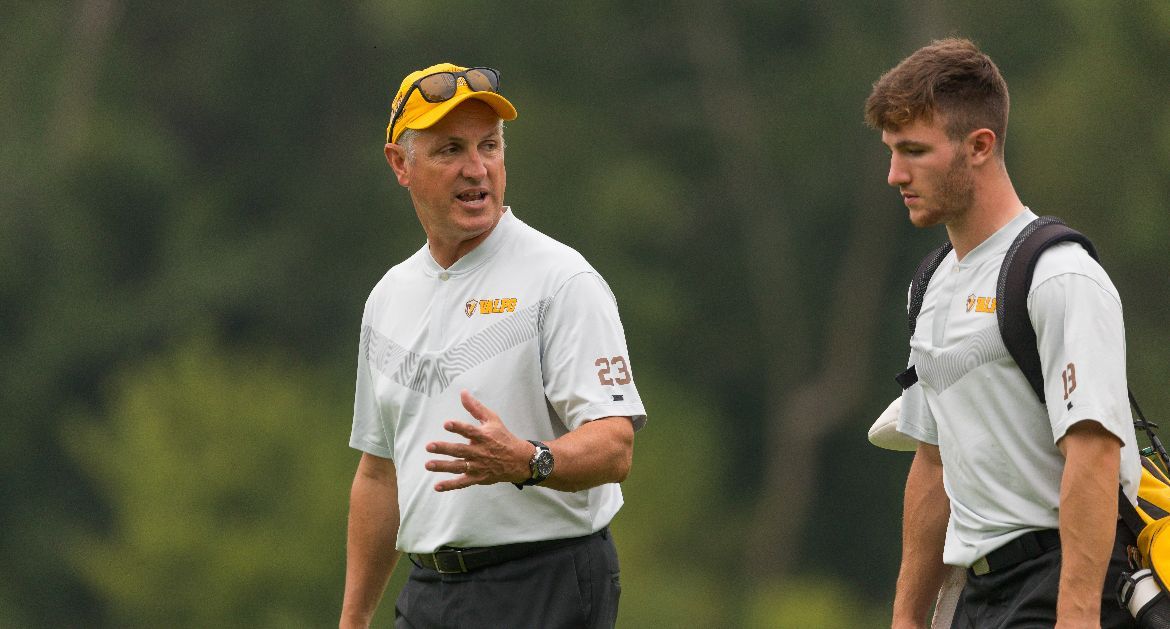 Head coach Dave Gring (left) is pleased with the enthusiasm of his team in practice thus far.

The season may not be starting on time or featuring a complete fall slate, but the fact that it’s starting at all is reason to rejoice for the Valparaiso University men’s golf program.

As the team tees off the 2020-2021 campaign on Monday with the start of the two-day, 54-hole Flyer Intercollegiate hosted by Lewis University in Lemont, Illinois, the group has its sights set on continuing the program’s forward trajectory.

“While it was an abrupt end to our spring and the 2019-20 season, we have been blessed with the opportunity to practice at full capacity since school has started and compete in a couple events this fall,” head coach Dave Gring said. “Since the pandemic commenced, there have been a lot of changes and adjustments by everyone. I deeply admire the desire to compete and the resolve that our team has showed in working through assorted adversity over these past six months.”

VanArragon set the program’s single-season record for scoring average at 72.57, led the team in five of its seven tournaments and shot par or better in 12 of 21 rounds. After finishing third in the MVC in scoring average, the two-time MVC Golfer of the Week was one of five MVC players to earn all-conference recognition.

“I’m very pleased with the amount of practice and competition that our team was able to participate in on their own over the summer,” Gring said. “The guys came into the start of our team practices with a lot of confidence and enthusiasm, ready to work even more on their golf swings, fitness and preparing for tournament play. We spend a lot of our practice time in assorted drills, work on the driving range and play on the course. I love how the guys have this deep desire to compete against each other all the time, whether that is in practice, qualifying rounds and even our cardio running.”

The returning group also features juniors Garrett Willis (Fort Wayne, Ind. / Homestead) and Charlie Toman (Chardon, Ohio / Notre Dame-Cathedral Latin), who tied for the fourth-best 54-hole tournament score in relation to par in program history by going five under at the Crusader Collegiate. Willis later became the first Valpo player to win a tournament since Peter Webb in 2017 by taking medalist honors at the Zach Johnson Invitational, where he helped his team finish as the runner-up.

Willis finished with a season scoring average of 74.10 that ranked sixth in program history, while Toman’s career mark of 74.20 is the current program record among those with a minimum of 20 rounds and two seasons. Willis (74.33) and senior Jack Juskow (Greenville, S.C. / Hamilton Southeastern) at 75.92 also enter the 2020-2021 campaign ranked in the top 10 in career scoring average. Juskow’s junior season was highlighted by a single-round score of 67 (-5) at the Invitation at Savannah Harbor, tying for the sixth-best 18-hole score in program history.

Prior to the 2019-2020 season, Valpo had not had a team top-two finish in an event that featured more than four teams since 2015. The squad did so in consecutive fall tournaments at the Crusader Collegiate and Zach Johnson Invitational, both of which featured 15-team fields. That was a precursor to the program’s biggest breakthrough, winning the team title at the 19-team Invitation at Savannah Harbor in February. The first-place finish marked the first time since the relaunch that Valpo won an event with a field of 10 or more teams.

“Our team was blessed with a number of really good finishes last year, both as a team and individually,” Gring said. “While we will miss the leadership of our three seniors who graduated last year, we’ve added two tremendous freshmen in Alex Heck and Mason Bonn to what we consider to already be a very strong team. We have a lot of depth and talent on the team and the guys are super excited to get out and start competing this fall and next spring.”

After a practice round on Sunday, Valpo will play the first 36 holes of the Flyer Intercollegiate hosted by Lewis University at Cog Hill Golf & Country Club in Lemont, Illinois on Monday. The day will tee off with an 8:30 a.m. shotgun start, before the final 18 holes begin with tee times starting at 8:30 a.m. on Tuesday. The event will feature a five-count-four format with 54 holes of stroke play. Valpo’s remaining student-athletes will compete as individuals. The team has one other event on the fall slate — a dual match against Drake on Oct. 15 in Burlington, Iowa.

“Both of our fall tournaments will be played on exceptional golf courses — Cog Hill #4 Dubsdread in Chicago and Spirit Hollow Golf Course in Burlington, Iowa,” Gring said. “Both courses will provide a good test for us and it will be very satisfying to be on the course with the guys and trying to win some events. We can’t wait to get started.”