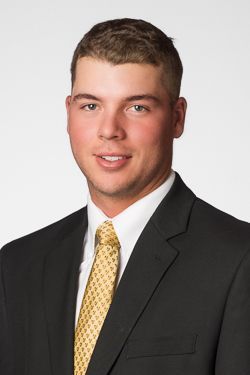 2021-22: Earned an automatic NCAA Regional berth by winning individual medalist honors at the MVC Championship, where he shot six under par on the back nine in the third and final round with six birdies in the final nine holes. That performance helped him come from behind to edge MVC Golfer of the Year Matthis Besard (Southern Illinois) by one stroke for the conference title... Became Valpo’s first NCAA qualifier since joining the Missouri Valley Conference... Named to the All-MVC First Team in addition to earning MVC Newcomer of the Year recognition... Finished tied for 15th in a competitive, 75-player field at the NCAA Columbus Regional by carding a 214 (74-70-70)... Tied for first in a 98-player field at the Butler Spring Invitational... Finished the season with a 72.86 scoring average and seven top-10 finishes in 14 events totaling 37 rounds... Carded par or better in 16 rounds... Season scoring average ranked fourth in program history behind only his teammate Caleb VanArragon’s first three collegiate seasons... Carded a 67 (-5) in the third round of the MVC Championship on April 26, tying for the sixth-best 18-hole score in modern program history while also tying for the third-lowest 18-hole score in MVC Championship history (since 1956)... Posted a 140 (-2) at the Twin Oaks Intercollegiate, tied for the fourth-best 36-hole tournament score in the program record book... Tied for fourth in modern program history in 36-hole tournament score in relation to par by going one stroke under at the Butler Spring Invitational in March... His MVC Championship performance earned the Valparaiso University Male Performance of the Year honor at the department’s annual ARC Awards.

Prep: Six-year starter… Helped his team to a 99-match winning streak and an overall record of 120-6 while playing under head coach Tim Codd…. Four-time Niagara Frontier League champion… Shattered a conference record for lowest match score with a six under 30… Was a Section VI Championship runner-up as a freshman, helping his team qualify for state that season… Was also a WNY Prep Talk Athlete of the Week and qualified for the National High School Invitational at Pinehurst… Posted two runner-up finishes and a third-place finish in three HJGT events, compiling a scoring average of 72 over those tournaments… Was the Buffalo District Golf Association men’s individual and match play champion, becoming the youngest player in the association’s 97-year history to accomplish that feat… Won back-to-back BDGA Junior Match Play championships and had a top 5 finish at the AJGA Junior at Southpointe… High honor roll member… Was in the top 6 percent of his class, was a NYSPHSAA Scholar Athlete and a member of National Honor Society… Volunteered for SABAH, which teaches ice skating and hockey to children and adults with special needs… Was also a three-year member of his school’s varsity hockey team and a captain of both his travel team and the varsity team.