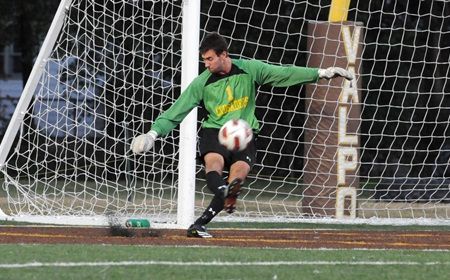 Valparaiso goalkeeper Ryan Schwarz (Rockford, Ill./Boylan Catholic) matched the Crusader career shutout record with his 14th clean sheet, while newcomer Guy Shabtay (Ramat-Gan, Israel/Blich [Prairie State C.C.]) found the back of the net in the waning minutes to give the Valpo men's soccer team a 1-0 victory over UNLV at the UNLV Nike Invitational in Las Vegas, Nev. to open the season Saturday.

“This was a very difficult game to open the season,” said Crusader head coach Mike Avery. “UNLV was a good opponent and gave us a number of different problems to solve. I am proud of our players for figuring out a way to deal with the heat and deal with UNLV to come out with the win.”

Schwarz tied current Valpo assistant coach Jeff Oleck for the shutout record by holding the Rebels scoreless on Saturday. The fifth-year senior made six saves to earn the clean sheet, while also getting help from the woodwork on a couple of UNLV shots. It marked the second straight season that Schwarz has started the year with a shutout.

“A number of Ryan's saves today were of the routine variety, but he definitely came up with a couple of big saves,” said Avery. “There was one fantastic save that we've just come to expect from him. Ryan really earned his keep today, it was another really good performance from him.”

Meanwhile, the Crusaders would need just one goal to earn the victory, and despite being credited with just six shots to UNLV's 15, made an attempt on goal in the 88th minute count. Senior midfielder Jake Freisinger (Saint John, Ind./Lake Central) played a through ball that Shabtay, in his first regular season match as a Crusader, ran onto between two defenders to break through alone on goal. The junior-college transfer then moved around UNLV (0-1-0) netminder Simon Cook and took advantage of the empty frame for the deciding tally.

“Guy had a great finish to put the game in our favor,” said Avery. “It was a well-deserved, very hard-fought win for our side and a great way to start the season. We played everyone we had available today and we definitely needed every single person, dealing with these conditions. With the heat and the travel, there were a lot of things that could have gone wrong. But fortunately everyone put in a good shift on the pitch, we grinded it out and found a goal for the win.”

Valparaiso (1-0-0) closes play at the UNLV Invitational on Monday with a mid-morning match local time match against UC Riverside, which defeated Alabama A&M 5-0 on Saturday. The fixture will start at 12:30 p.m. CDT, with live stats available at www.valpoathletics.com.