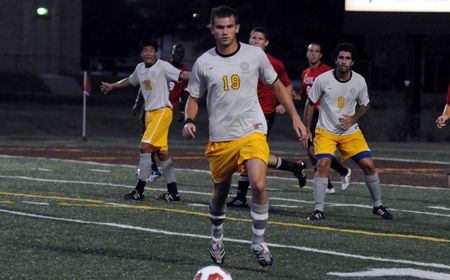 The four goals marked a season high for the Crusader side, while the four-goal margin of victory was also a season best.  The last time Valpo tallied four goals and won a game by at least four goals came in Horizon League quarterfinal action last year at Brown Field, when the Crusaders downed Milwaukee by an identical 4-0 count.

“Obviously, when you score goals, it takes the pressure off your goalkeepers and the back, and we were able to do that tonight,” said Crusader head coach Mike Avery.  “It was key today to get that first goal relatively early in the game, and then to add on with three goals in the second half was key as well.”

Western Michigan’s best chance to crack the scoreboard came early on, as in the ninth minute, David Fuller’s header off a corner kick went just right of the goal frame.  After a period of time with few chances for either side, Stivers finally cracked the scoring column in the 27th minute.  Valpo played a ball in the air into its offensive end that was headed by a WMU defender directly to the feet of Stivers.  Bronco goalkeeper Cody Camp came off his line to attempt to cut down Stivers’ angle, but the senior calmly chipped the ball over Camp’s head from 25 yards for the game’s first goal.

Ortiz added an insurance tally in the 66th minute for his third career goal.  Fellow senior Jake Freisinger (Saint John, Ind./Lake Central) played him into the center of the field, and Ortiz carried it forward up the middle to about 25 yards out.  He then ripped a shot low to the turf that found its way inside the left post to give the Crusaders a 2-0 edge.

Stivers added his second marker of the fixture in the 73rd minute, as Chadd Sult (South Bend, Ind./John Adams) and Roby Del Giudice (Toronto, Ont./Robert F. Hall [Wallace State C.C.]) combined to get the ball to Stivers on a breakaway.  Left 1-v-1, the senior easily beat Bronco relief goalkeeper Sean Lewis for his first career multi-goal game.  The latter goal also was Stivers’ sixth of the 2010 campaign, matching his output from a year ago.

It was the Crusaders’ Israeli connection that closed the scoring just 1:06 after Stivers’ second goal.  Lior Avisror (Yehud, Israel/Mekif Yehud [Prairie State C.C.]) led Shabtay into the box, and Shabtay found himself 1-v-1 with Lewis.  The junior chipped the ball over Lewis’ head into the top-left corner of the frame from 10 yards out for his third goal of the season.

Ryan Schwarz (Rockford, Ill./Boylan Catholic) got the start in goal for the Crusaders and faced little pressure all night long, having to make just two saves in 78 minutes of action.  Kyle Zobeck (Coralville, Iowa/Iowa City West) entered late for Schwarz and played the final 12 minutes without having to make a stop.  Camp and Lewis each made one save in a half of play in goal for Western Michigan (7-5-2).  The substitution in goal was one of just many the Crusaders made, as Valpo got 23 guys a run in on Wednesday night.

“We’ve been telling our guys that we’re not as good as our record at the start of the year, but that we’re not as bad as our record would indicate over our last five games either,” said Avery.  “As a team, we just have to be mature and stay focused, do things the right way and hope the results start to fall in our direction.  I hope tonight’s result is a sign of a turnaround for our team.  It’s definitely a great momentum builder heading into a huge game Saturday night at Green Bay.”

Valparaiso (7-6-2) starts down the home stretch of the regular season Saturday night with a key Horizon League showdown at Green Bay.  Kickoff is set for 7 p.m., and all the action can be heard live on WVUR, 95.1 FM and online at www.valpoathletics.com, which will also have a link for live stats.  Live video for the match is available as well for a fee through the Green Bay website.