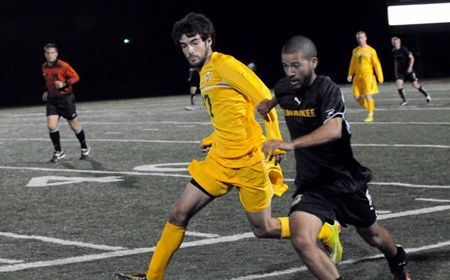 The win improves the Crusaders’ mark at home to 4-2-1, assuring them of a fifth straight season with a positive home record.  The victory also is the eighth overall for Valpo in 2010, matching the third-most in a single season in program history.  With the clean sheet, the Crusaders also matched a program record with their seventh shutout of the year.

“It certainly feels good to get a win after a lot of close results have gone the other way,” said Crusader head coach Mike Avery.  “I thought not only did we get the win, but we played well in doing so.  I’m happy for the players who got on tonight; they played free, let things flow and it showed.  We had a really young side out there tonight and it was neat to see the future of the team on display.”

Valpo got the only goal it would need in the 27th minute of play Wednesday.  Freshman Charles Barden (Cedar Rapids, Iowa/Linn-Mar), making his first career start, took a corner kick and sent it into the short side of the box.  Sult was there waiting for it and volleyed it into the back of the net from 10 yards out to put the Crusaders on the board.  Along with being Sult’s first career marker, the assist was Barden’s first career point.

Shabtay then took care of business himself to put the Crusaders ahead by two goals in the 64th minute.  The junior lined up a free kick from 25 yards out on the right-hand side of the pitch and struck it between the two-defender wall.  The ball made its way through the wall and inside the near post for Shabtay’s fourth goal of the season.

Two goals was more than enough for the Crusaders on this night, as Eastern Illinois (4-11-1) placed just one of its seven shot attempts on frame.  Redshirt sophomore Kyle Zobeck (Coralville, Iowa/Iowa City West) made the one save for his second shutout of the year, while EIU netminder Sean Molony made four saves in the losing effort.  Valpo held a 16-8 advantage in total shots, while each side earned five corner kick opportunities.

“I thought both Charles and Todd in the wide midfield areas were very, very good for us tonight,” said Avery.  “It also was really nice to see Guy have such a strong game.  He’s had an up and down season because of injury, but we know we have a great goal scorer there, and hopefully this is a game he can build on.”

Valparaiso (8-8-2) closes out the 2010 campaign at Brown Field on Saturday night with a Horizon League contest against Detroit.  Kickoff is slated for 7 p.m., and prior to the match, the Crusaders will recognize their senior class with a Senior Night ceremony.  Saturday’s match can be heard live on WVUR, 95.1 FM, and online at www.valpoathletics.com, which will also have a link for live stats.

“We’re looking forward as a team to Saturday night’s match now to send our seniors off,” said Avery.  “They’re a group of players who have really helped turn our program around, and hopefully we can send them off with a win and end with back-to-back seasons above .500.”