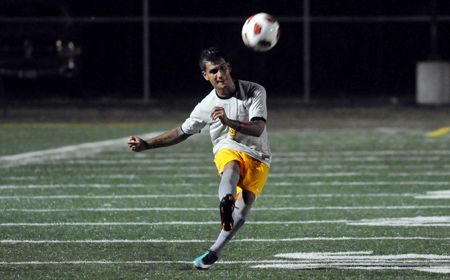 Adrian Ortiz was one of eight seniors honored prior to Saturday's match and moved into third in Valpo history in assists during the match. (Ray Acevedo)
Detroit at Valparaiso | November 06, 2010
Related Links
Related Links

Valparaiso’s group of eight graduating seniors were honored prior to Saturday night’s match at Brown Field and all started and ended the match on the pitch.  In between, they all played vital roles in the Crusaders’ 2-0 victory over Detroit in the season finale.

“I’m really happy for our seniors that we can end the season on a positive note, with all eight of them playing a significant role in tonight’s match,” said Crusader head coach Mike Avery.  “It’s also kind of bittersweet, as we certainly feel like we’re good enough to still be playing.  But hopefully we can use this season to learn some valuable lessons that will help us next year.”

The first half featured few great chances for either side, as Detroit didn’t get a shot on frame, while the Crusaders’ two shots on goal were both saved by the Titans’ Brandon Waterstradt.  Valpo had a stellar chance in the 52nd minute when Stefan Antonijevic (Buffalo Grove, Ill./Stevenson [College of Lake County/Marquette]) had the ball come to his head with Waterstradt out of position, but his header attempt was cleared off the back line by a Titan defender.  Ken Simon hit the post on a shot for Detroit (8-8-2, 4-4-0 Horizon) in the 61st minute, while Antonijevic had an attempt hit the post in the 71st minute.

Detroit had a player shown the red card in the 74th minute, and the Crusader seniors took over from there.  It was Del Giudice who cracked the scoreboard first, intercepting a Titan pass in the center of the pitch and driving the ball from 20 yards out to the upper right corner in the 76th minute for his third goal of the season and fifth goal of his career.  It also ended up being the third match-winning goal for Del Giudice as well.

Then a trio of Valpo seniors hooked up for an insurance tally in the 80th minute.  Freisinger sent a pass into the Crusader offensive half, where Ortiz flicked the ball on to Stivers, who found himself one-on-one with Waterstradt.  Stivers calmly shot the ball past the Titan netminder into the lower left corner for the 2-0 lead.  For Stivers, it was his team-best seventh goal of the year and 16th of his career, tying him for ninth-most in Crusader history, while Ortiz registered his 13th career assist on the play, tying for third-most all-time at Valpo.

Schwarz needed to make just three saves to earn the clean sheet, the program-record 17th shutout of his career.  Schwarz also closes out his career as Valpo’s all-time goals against average leader (1.45) and third in program history in saves (291).  Valpo out-shot Detroit on the evening, 21-10, and also enjoyed a 6-1 advantage in corner kicks.  Waterstradt made four saves in goal for the Titans.

“I think it's a great milestone for our program to get back-to-back winning seasons,” said Avery.  “The challenge now for us is to move from a program that's winning games to becoming a championship team.  So, while this season is maybe a bit disappointing in terms of our Horizon League record, I do think it was a necessary stepping stone for what will hopefully be a successful 2011 season.”