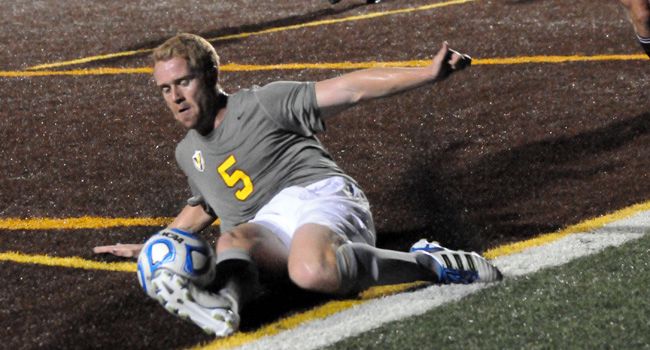 Valparaiso outshot former Mid-Con rival Western Illinois 25-11 Sunday afternoon and put 11 shots on goal, but it was the homestanding Leathernecks who found the back of the net late in the first half for the game’s lone goal, as the Crusaders fell 1-0 in Macomb, Ill.

“We knew today would be a difficult game, especially coming off a really hard game on Friday night and then a long trip,” said Crusader head coach Mike Avery.  “So we changed a few things in our lineup today to try to create more energy, and for the most part it worked pretty well.  I thought our guys played well; we carried a lot of the game and really dominated in the number of shots and chances.  Western Illinois is a good team and have a lot of good attacking players, and for the most part, we held those players in check.  While we’re disappointed with the result, I do think we had a good performance today, and we also got through it with no injuries and no cards.”

Valpo started to pepper the Leatherneck defense early and often on Sunday, tallying 13 first half shots, six of which were on goal, and also earning six corner kick opportunities.  But the Crusaders were unable to finish any of their opportunities, and Western Illinois eventually cracked the scoreboard first in the 44th minute of play.  A centering pass from Ebenezer Mengistu found the feet of Diego Gonzalez, who knocked it just underneath the crossbar for his second goal of the season.

Despite the halftime deficit, the Crusaders continued to push forward and put pressure on Western Illinois (6-4-1), looking for the equalizer in the last 45 minutes.  Valpo registered five shot attempts in the first 12+ minutes of the second half and then got a couple efforts on frame midway through the half, both of which were stopped by WIU goalkeeper Andy Ryan.

Still trailing by a goal, Valpo had a couple late surges remaining in the last 10 minutes.  Kelvin Zelee (South Bend, Ind./John Adams [Indiana]) had an attempt turned away by Ryan in the 82nd minute, and then Brendan Roth (Elkhart, Ind./Memorial) put a shot wide in the 84th minute.  In the final 30 seconds, Roth had a shot knocked over the goal line by Ryan.  Kevin Miller (Jefferson City, Mo./Helias) quickly took the ensuing corner and got the ball back to Roth with just seconds remaining, but one more attempt by the senior was saved by Ryan.

10 different Crusaders had multiple shot attempts on the day, with Roth contributing five off the bench, three of which were on frame.  Valpo’s 11 shots on goal were all stopped by Ryan in the winning effort, while Kyle Zobeck (Coralville, Iowa/Iowa City West) made three saves on Sunday.

“Given the fact we are starting to prepare for Wright State next weekend, which is more important in the grand scheme of things, we thought it was a good day for us today,” said Avery.  “Western Illinois’ goalkeeper had a very good day and kept them in the game.  I think they’re going to have a very good season, and I don’t think it’s a loss we should be ashamed of.  I was especially proud of the fact we kept fighting until the end, right down to the final seconds.”

Valparaiso (4-4-2) returns to Horizon League action on the road this coming Friday, Oct. 7, as the Crusaders travel to Dayton, Ohio to take on current league leader Wright State.  Friday’s contest is slated to kick off at 6 p.m. CDT, with live video coverage via the Horizon League Network and live stats available at www.valpoathletics.com.