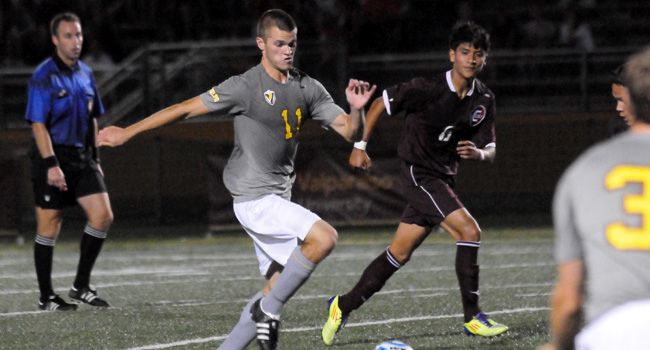 Valparaiso moved to the top of the Horizon League standings, remaining unbeaten in league action, as a goal in the 38th minute by junior Sam Haines (McKinney, Texas/McKinney Boyd) was the deciding strike in a 1-0 victory by the Crusaders over Wright State Friday evening in Dayton, Ohio.

“I thought it was a very mature road performance from our team tonight,” said Crusader head coach Mike Avery.  “We’re really proud of the way the team handled the game, because it was a tough environment to play in.  Wright State has done a great job to draw huge crowds, and there’s just a lot going on, a lot of distractions around the park.  Our guys really stopped up in a number of different areas, stayed focused, and were just mature and showed experience tonight.”

The Crusaders had the better of play in the first half against the Raiders, tallying seven shot attempts to just two for Wright State.  Redshirt junior Kyle Zobeck (Coralville, Iowa/Iowa City West) had to make just one save in the first 45 minutes to keep WSU off the scoreboard, while Valpo made the most of its fourth shot on goal of the game.

Junior Jonathan Smith (McKinney, Texas/McKinney) took a free kick from 30 yards out on the left side and bent it in over the defense into the box, where fellow Texas Haines was there to drive it inside the near post with a well-placed header.  For Haines, it was his first goal of the season and just the second of the junior’s career, while Smith picked up his second helper of the year.

With the goal advantage, the Crusaders maintained their trademark staunch defensive presence in the second half to keep the Raiders off the scoreboard.  Despite being out-shot in the final 45 minutes, 7-5, Valpo managed to place three shots on goal while giving up just two attempts on frame, both of which were stopped by Zobeck.  Wright State got the ball deep into the offensive end in the waning seconds in an attempt for the equalizer, but the Crusader defense was up to the challenge, keeping the Raiders off the board and securing the big league victory to go with the clean sheet.

“We felt like we were the better team on the night, and we were glad to get the goal and hold on,” said Avery.  “It got a little bit exciting at the end, but that's going to happen when you're only up a goal and playing against a good team.  Kyle had another great shutout, and I thought Stefan Antonijevic and Wei Ming Wong were both terrific in the middle of the back.  Probably the man of the match for us was Chadd Sult at left back; he had a terrific game both defensively and in the attack.”

Zobeck made three saves to earn the shutout, his Horizon League-best fifth of the season.  The junior has already tied his single-season high for clean sheets and is already tied for third in a single season in Crusader history in the category, while he also moved into a tie for third place with Aaron Rhame with 12 career shutouts.  Valpo, which out-shot Wright State (6-4-1, 2-1-0 Horizon) 12-9 on the night, put seven shots on goal, six of which were stopped by WSU netminder Craig Feehan.

Valparaiso (5-4-2, 2-0-1 Horizon) now has over two weeks off from Horizon League play and returns home to start a four-match homestand on Sunday with a noon kickoff against former Mid-Con rival Oral Roberts.  Live stats for Sunday’s game will be available through www.valpoathletics.com.

“Now we've got a really quick turnaround, but we're excited to get home and to get to play six of our last eight at home,” said Avery.  “We’ve been on the road for what seems like forever, so we’re definitely excited to get back and play ORU on Sunday and then have a week off before Ohio State.  It’s nice that the team has a bit of a break from the league; it gives us a chance to recharge, refuel, and reenergize ourselves for the stretch run.”