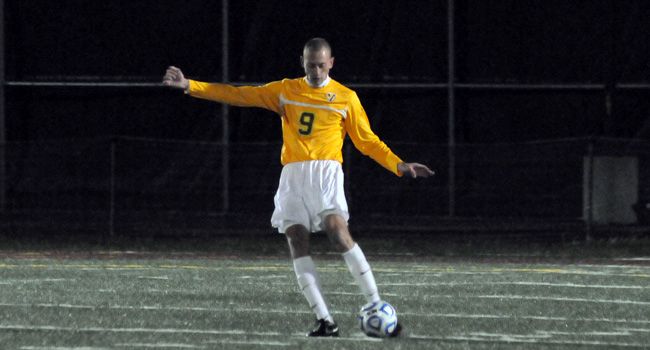 This Week in Crusader Soccer: Valparaiso concludes its four-match homestand at Brown Field this week with two matches.  The non-league slate wraps up with a Tuesday night matchup against IPFW, while the Crusaders then resume Horizon League play Saturday evening against Milwaukee.

Wrapping Up Last Week: A light week on the match docket, the Crusaders fought to a scoreless draw in double overtime with regionally-ranked Ohio State at Brown Field on Sunday.  Valpo out-shot the Buckeyes, 14-9, but neither side could push a goal across in 110 minutes of play.  Kyle Zobeck made three saves to preserve the clean sheet for the Crusaders.

Following the Crusaders: Tuesday’s game against IPFW is the fifth of six, including four home games from Brown Field, that will be video streamed this year through the Horizon League Network.  Live audio broadcasts for both this week’s matches will also be available locally on WVUR, 95.1 FM, Valparaiso.  Links to the live video and audio broadcasts, as well as live stats, will be available at www.valpoathletics.com.

Head Coach Mike Avery: Mike Avery returns for his fifth season at the helm of the Crusaders’ men’s soccer program after leading Valpo to back-to-back winning seasons for the first time in program history.  Avery, who currently owns 34 victories as head coach at Valpo, led the Crusaders to a 9-8-2 record last season, matching the second-most wins in a single season all-time at Valpo.

Scouting the Opposition: IPFW - The Mastodons enter Tuesday’s meeting at 6-7-1 on the year and 2-1-0 in Summit League play, coming off a 1-0 loss to Oakland.  Max Touloute and Colin Helmrich have combined for 18 of IPFW’s 23 goals, tallying 10 and 8, respectively.  Ryan Bristol and Brandon Cloutier have split most of the time in goal, with Bristol holding a 3-4-1 record and a 2.18 GAA.
Milwaukee - The Panthers enter this week at 5-6-2 overall and 2-1-2 in Horizon League play, having drawn each of their last two league fixtures.  Robert Refai has scored a team-best seven goals, while Gerardo Saavedra has added four goals and four assists.  John Shakon and Josh Rhode have split the goaltending duties, combining to post a 1.67 GAA.

The League Jumble: With the win at WSU on Oct. 7, Valpo is now unbeaten through its first three Horizon League contests of the season, the first time since joining the league prior to the 2007 season that the Crusaders have earned a result in each of their first three league games.  In fact, you have to go all the way back to 1997, when Valpo was still in the Mid-Con, to find a year when the Crusaders earned points in each of their first three conference games - Valpo would finish that year 6-1-1 in Mid-Con play and win the conference tournament.  The Crusaders currently sit third in the Horizon League table, but have two games in hand on both squads ahead of them in the standings.

Home Field Advantage: Every year since Mike Avery’s arrival, the Crusaders have recorded at least a .500 record at home.  Following the draw against Ohio State on Sunday, the Crusaders are 3-1-1 at home this year, improving Avery’s record at home to 18-11-5 (.603).  The schedule sets up well for Valpo as well, as four of the Crusaders’ last six games will be at Brown Field.

There’s Almost Always Drama: 11 of Valpo’s first 13 games this year have been ties or one-goal decisions, and if history is any indication, a lot of one-goal games are still on the horizon.  With the win over Wright State on Oct. 7, the Crusaders have now had 30 of 35 Horizon League contests end as one-goal decisions or draws since joining the HL prior to the 2007 campaign.

Another Week, Another Clean Sheet: Redshirt junior goalkeeper Kyle Zobeck continued his march up the Crusaders’ record books with his shutout of Ohio State on Sunday.  The clean sheet was Zobeck’s sixth of the year, already second-most in a single season in Crusader history, and gives him 13 career shutouts, just one behind Jeff Oleck for the second spot on Valpo’s all-time chart.  Zobeck, who currently leads the Horizon League in both GAA and shutouts, already holds Valpo’s career GAA record at 1.11, while his current pace of 0.87 would be the Crusaders’ top single-season mark as well.

Spreading the Wealth: Sam Haines’ match-winning goal against Wright State on Oct. 7 made him the 11th different Crusader to find the back of the net already this season as Valpo has tallied 18 goals through 13 games.  Six different players have tallied multiple goals, led by Gerardo Avelar’s trio of markers, while five more have added a goal apiece.  In addition, all five of Valpo’s victories have featured different players picking up the match-winning goal.

Record-Setting Performance: The Crusaders opened the season with a bang on Aug. 26, scoring eight goals in the 8-0 victory over Calumet.  The eight goals marked a new program record for goals in a single game; previously seven, which was accomplished twice, most recently in 1995.  The eight-goal winning margin also set a new team record in that category.

A First Time For Everything: Five of Valpo’s eight goal scorers against the Crimson Wave tallied their first career goals.  Gerardo Avelar, Charles Barden, Clayton Lyons, Todd Vervynckt and Stipo Zeba all netted for the first time in their careers against Calumet, with Avelar getting off the mark in his debut.  In addition, a trio of Crusaders picked up their first career assist in Zeba, Jordan Lewis and Andy Lynn.

Crusaders Picked Fourth in Preseason Poll: The head coaches selected Valparaiso to finish in a tie for fourth place in the Horizon League this season according to the preseason poll.  Only Butler, Cleveland State and Milwaukee were projected ahead of the Crusaders.