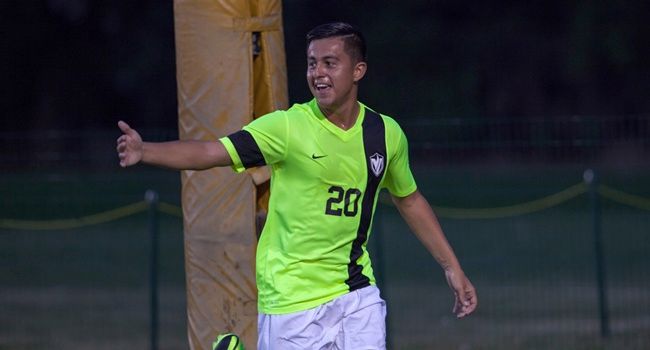 This Week in Crusader Soccer: The Valparaiso men’s side is back on the road as the team travels to Rochester and East Lansing, Mich. to take part in the Grizzly/Spartan Crossover Tournament. The Crusaders kick off the 2013 Horizon League campaign on Friday, taking on Oakland, in what will be the side’s third game of the season. Valpo then travels to East Lansing to wrap up the weekend with a game against a top-25 Michigan State squad.

Previously: The Crusader men traveled to Jacksonville, Fla., where they opened the 2013 regular season with a pair of draws in the uncomfortable, humid Florida heat. The Crusaders met Jacksonville and North Florida for the very first time; earning a 0-0 draw with the Dolphins while playing a man down, and battling back to earn a 1-1 draw against the Ospreys.

Following the Crusaders: Friday’s game will have a live video stream via the Horizon League Network, accessible through ValpoAthletics.com. Sunday’s match will have live video for a fee through Michigan State’s website. Live streaming links, live stats, game previews, box scores, and post-game summaries will be available on the website. Visit @VUMSO on Twitter to view comments and photos throughout the season. Over the course of the 2013 season, seven matches will have free live video on the Horizon League Network, including three matches at home.

Series Notes: Oakland - Friday will mark the 11th meeting between the Crusaders and Oakland, with the Grizzlies holding a 6-3-1 advantage. Friday will, however, mark the first Horizon League contest between these two teams. The teams last met in 2006 as members of the Mid-Con where the Crusaders were able to best the Grizzlies in a 1-0 match.  Michigan State – Sunday will mark the 15th game played between the Crusaders and Spartans - Michigan State holds a 10-1-3 advantage, but Valpo has drawn three of the four meetings under Avery. The two teams last met just a season ago, with the match ending in a 0-0 draw.

Scouting the Opposition: Oakland - The Grizzlies return 17 letter winners from a 2012 squad that captured a first place finish in the Summit League. Key returners in 2013 include: Miche'le Lipari, a midfielder who scored 7 goals and assisted on 3, and Scott Messer, a senior goal keeper who averaged 5.1 saves per game a season ago. The Grizzlies (0-1-1) started the 2013 season with a 2-2 draw at Pittsburgh and a 1-0 overtime loss to Duquesne. The 2013 season will mark the first time the Grizzlies compete in the Horizon League. In the Horizon preseason poll, coaches picked Oakland to finish second in the conference.  Michigan State - Coming off of a 2012 season that saw the Spartans finish the season as Big Ten Tournament Champions and fall in the second round of the NCAA Tournament, they return two players featured in the TopDrawerSoccer.com Top 50 Preseason Player Rankings. Senior defender Kevin Cope and junior forward Adam Montague were featured in the rankings. Cope was ranked no.22 on the list having been featured in 23 matches last season. Montague, ranked no.47, scored a team high 8 goals and 22 points a season ago. The Spartans (1-0-0) started the season off in impressive fashion, defeating Western Michigan 4-0. Kevin Cope, Adam Montague, Dewey Lewis, and Sean Conerty all made the score sheet.

Notables: This past weekend saw Tom Serratore earn his first clean sheet as a starting goalkeeper for the Crusaders, Julio Velasquez notch his first career goal as a Crusader, and Jacob Gandarilla provide his first assist in Crusader brown and gold.

Heavy Minutes: The Crusaders logged heavy minutes in their first two games of the 2013 season. Playing in the humid Florida heat, the Crusader men played a total of 220 minutes, with each of their games needing to be decided with extra time. The team picked up a pair of draws on the weekend.

Staying Organized in the Back: In 2012, the Crusaders set the standard in the Horizon League and ranked 19th in the country in team goals against. Conceding only 17 goals in 20 games, the team achieved a GAA of just 0.81. Valpo started the 2013 campaign in similar fashion, conceding just 1 goal over the weekend. Mitch Albrecht, Yannick Iwunze, Adrian Graham, and Omar Lawrence kept anchored the Crusader defense.  Finishing Chances: In 2013, the Crusader men will look to be more decisive in front of goal. Last season, the team was able to create plenty of chances in front of goal, averaging nearly six shots on goal per game. However, Valpo was only able to finish one of six chances per game, scoring 20 goals in 20 games. In the first weekend of regular season competition, the Crusader men were able to able to find goal once. Playing down a goal, Julio Velasquez was able to bring the game back to level with a skillful finish in front of goal.

On the Road Again: Home games for the Crusaders will be few and far between this season. The team is set to play nine non-league and four league games away from Brown Field, highlighted by trips to Tulsa and Michigan to take on the #13 Golden Hurricane and #15 Wolverines. Crusader fans will need to jump at any chance they have to take in a home game, as they will be a rarity in 2013. The Crusaders will only have five opportunities this season to defend Brown Field. The men’s side is at home against IUPUI (Sep. 13), Milwaukee (Oct. 12), UIC (Oct. 25), Western Michigan (Oct. 30), and Detroit (Nov. 9).

Returning All-League Players: Eric Nieto, who earned Second Team All-League honors last season, is back for his junior year and was a preseason Second Team All-League selection by College Sports Madness. 2012 Horizon League All-Newcomer selection Jordan Aidoud returns for his sophomore season with the Crusaders as well. Aidoud led the team in points a season ago, finding the back of the net four times and assisting on three goals.

Champions in the Classroom: In 2012, Todd Vervynckt was selected to the Horizon League All-Academic team and the CoSIDA Academic All-American Third Team and All-District V First Team. Vervynckt is in the Mechanical Engineering program at Valparaiso.

Newcomers and Transfers: Adding to the players returning from last year’s squad are a handful of talented freshmen and transfer students. Rookies Nico Campbell, Adrian Graham, and Omar Lawrence join talented transfers Jacob Gandarilla, Jack McIver, and Julio Velasquez. The addition of this group of players will help to raise the level of play for the Crusaders.