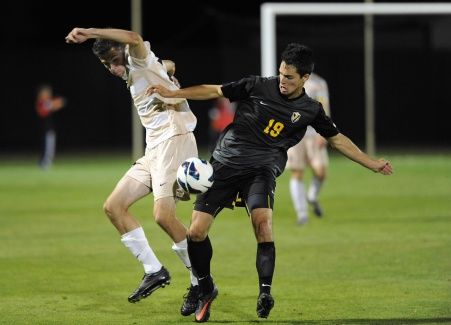 The Crusader men entered their contest against Michigan State unbeaten, but without a win.  That changed Sunday afternoon as Valpo defeated the #RV/24 ranked Spartans 2-1.  Nick Suker (Downers Grove, Ill./South) would score his first goal of the season and subsequent game winner in the 79th minute of the match.  Valpo would go on to keep its goal advantage and pick up its first win of the season, remaining unbeaten.

“First off, I’m really proud of the players and my staff because it was a good performance today,” said head coach Mike Avery.  “When you can get a win over the defending Big Ten champions, a team that is ranked in the top 25, at their place, it’s a good result.  To also earn the win, because we really earned it today; it’s very satisfying.  A lot of work goes into that and I’m happy for the guys.  It’s a validating result for a lot of the things that we’ve been doing.”

With the match level at 1-1 late in the game, Daniel Killen (Brooklyn Park, Minn./St. Bernard’s) was able to collect the ball in the Spartan midfield, turn with it, and run at the Spartan back line.  Killen was able to create enough space to fire a shot on goal, but the shot was deflected before it found the goal.  The deflection was then controlled by Suker who was given enough time to settle the ball and tuck it away to give the Crusaders a 2-1 advantage in the 79th minute.  Suker’s goal would end up being the game winner, as Nico Campbell (Kingston, Jamaica/St. George’s College) and the Crusader backs were able to keep Michigan State from finding an equalizer.

“As the game wore on we were able to open them up and get at their back four.  They had to push because they were chasing the game and it left some big gaps,” said Avery.  “We did a really good job of collecting the ball in front of their back four and turning and running at them so that created a lot of dangerous chances.”

The Crusaders wasted no time settling into the game Sunday afternoon.  The team stayed organized, pressured the Spartans, and connected passes to create a quality attack early on the game.  The quality of Valpo’s attack was realized in the 23rd minute of the game as Yannick Iwunze (Paris, France/Hightower [Tex.] H.S.) was able to get in behind the Spartan backline and send a dangerous ball across the box.  Iwunze’s serve was settled at the top of the penalty area and finished beautifully by Todd Vervynckt (Plymouth, Ind./Plymouth).

“I challenged the team this morning to really go after the opportunity and I think they listened and did that perfectly well,” said Avery.  “They went after it and imposed their will on the game and again, I’m very proud of them.”

The Crusaders would go into the second half holding a 1-0 advantage.  But as the second half played out, the Spartans would find their equalizer in the 64th minute on a ball sent in from a corner kick.   Michigan State’s Kevin Cope was able to finish his header and bring the game back to level.

Valpo would not unravel after conceding the goal, however.  The Crusaders stayed focused and tuned into the game.  The team would continue to attack and impose their will on the game.  Ultimately, it was this inspired play that led to the go ahead goal and the team’s first win of the season.  Valpo (1-0-3, 0-0-1 Horizon) remains unbeaten after four games played.

Suker and Vervynckt each scored their first goal of the season in Sunday’s match.  Iwunze and Killen were credited with the assists, also their first of the season.  In his first start, freshman goalkeeper Nico Campbell picked up his first win as a Crusader.

“It was a good performance in a lot of different areas today, both individually and collectively.  Our backs played well and the guys in the midfield were able to create and finish chances for us,” said Avery.  “It was also good for Campbell to get his first start and his first win.  He’s going to have a lot of them here at Valpo.”

Valpo is back in action Friday night (Sept. 13) to take on IUPUI in the Crusader’s first home game of the season.  Kick-off is set for 7:30 p.m. at Brown Field.  Follow @VUMSO on Twitter to stay connected with the team as they prepare for Friday night’s game.  Live stats for the game will be available through ValpoAthletics.com.