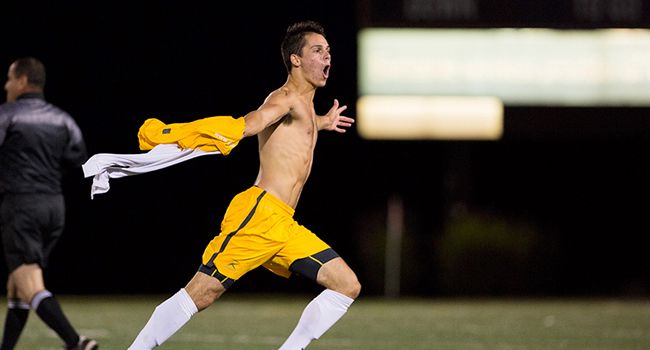 In their first home game of the season, the Crusader men welcomed IUPUI to Brown Field.  In what is becoming a common theme in the 2013 season, the Crusaders decided to give their fans the experience of extra time.  For the fourth time in five games, the Crusaders needed extra time to decide the outcome of their match.  So far in the season, each Valpo game that has been decided in extra time has ended in a draw.  Tonight, however, the script would waver from the norm.  Rather than the game end in another draw, Nick Suker (Downers Grove, Ill.) and the Crusaders would end the match and secure a victory in the 106th minute.  Suker, controlling a pass from Todd Vervynckt (Plymouth, Ind./Plymouth), scored his second goal of the season, and the golden goal of the match.  Valpo defeated IUPUI 2-1 in the second period of extra time.

With the match level at 1-1 late in the final period of overtime, relentless pressure from the Crusaders would ultimately lead to the game winning goal.  Feeding off the energy of over 800 fans at Brown Field, Jesse Ortiz (Aurora, Ill./West Aurora) was able to win the ball off an IUPUI defender in the most important challenge of night.  With the ball turned over in a dangerous area, Ortiz was able to find Todd Vervynckt making a forward run toward the Jaguar goal.  With a lot of work still needing to be done, Vervynckt was able to beat a Jaguar defender and play a ball into Nick Suker who timed his run perfectly to stay onside.  With only the goalkeeper to beat, Suker took a touch and hit a shot to the far post.  His shot would beat the Jaguar goalkeeper and give the Crusaders the victory with only 4 minutes left in the match.  The game winner would be Suker’s second consecutive goal, putting his season total to 2.  Vervynckt was responsible for the assist.

“First off, it was an exciting game – we had a really great crowd for our first home game of the season, we want to thank everyone for coming out tonight and giving us support at home.  The environment was electric and you could see how our guys were able to feed off of that positive energy,” said head coach Mike Avery.  “I think the fans definitely got their money’s worth tonight.”

The Crusaders put themselves in a tough spot early on in tonight’s match.  Unable to really put their stamp on the game early on, the team conceded a goal in just the 21st minute of the match.  The Jaguar goal came as the result of a corner kick that was not dealt with properly by the Valpo backs.  The ball served in from the corner found the foot of Juan Lopez who took a shot, but had his effort blocked.  Fortunately for the Jaguars, Michael Sass was able to finish the loose ball, placing it just beyond the reach of a diving Tom Serratore (Tinley Park, Ill./Andrew).

The Crusader men created plenty of quality chances in the first half, but they lacked the final touch necessary to bring the match back to level.  Jack McIver (Cincinnati, Ohio) was unlucky not to find the back of the net in the first half.  McIver was able to connect well on a ball served in from Ortiz; however, the Jaguar goalkeeper was able to do just enough to keep the IUPUI lead at 1-0.

As the second half of play began, the Jaguars seemed content to defend with ten men behind the ball and keep their 1-0 advantage.  This gave the Crusaders an opportunity to connect passes and serve balls into dangerous areas.  Throughout the second half, Valpo was able to create quality chances by serving balls into the penalty area.  The Crusaders created chance after chance but were unable to finish any of them.

The team’s effort would finally pay off in the 83rd minute however, as Ortiz served a great ball into the penalty area that was brought down and controlled by Vervynckt.  With only eyes for goal, Vervynckt took a touch to the corner of the six and buried the ball in the back of the net with an incredible left footed strike.  The game tying goal was Vervynckt’s second of the season.  Vervynckt’s late goal would send the match into extra time with momentum and the energy of the fans all on the Crusader’s side. Valpo would find the game winner with just less than three minutes to play.

“IUPUI made the game difficult for us.  They scored off a set piece early on but I thought we did a really good job of pushing the tempo in the second half,” said Avery.  “This tempo ultimately led to a great strike by Todd.  In the overtimes, it looked as though we were the team that was pushing to win so it was nice to see us create and breakthrough in order to get the win.”

Valpo outshot IUPUI 22 to 11 on the night, with 11 Crusaders taking at least one shot in the match.  Although Tom Serratore only made 4 total saves, each of those 4 prevented a quality Jaguar chance.

Valpo (2-0-3) remain s unbeaten on the season.  The Crusaders will be tested next Friday as the team travels to Tulsa to take on the #13 Golden Hurricane.  The Crusaders then travel to Western Illinois to take on the always challenging Leathernecks.  Live Stats will be available for both games over the weekend.  Until then, stay connected with the unbeaten Crusaders by following @VUMSO on Twitter.