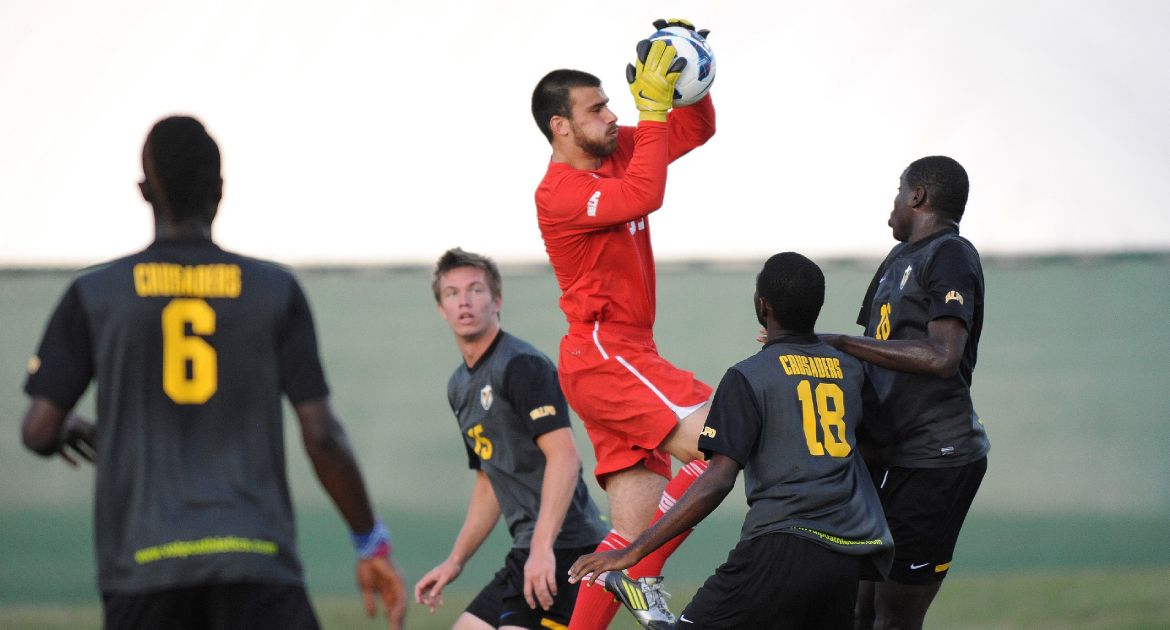 Crusaders Travel to #12; Wrap Up Weekend at Western Illinois

This Week in Crusader Soccer: The Valparaiso men’s soccer team is back in action this weekend as the team travels to Tulsa to take on the #12 Golden Hurricane in a Friday night matchup. Valpo then travels to Western Illinois to face off against the Leathernecks on Sunday afternoon.

Previously: The Crusaders welcomed IUPUI to Brown Field last Friday night and battled the Jaguars to a 2-1 overtime victory. The game-winning goal came in the 106th minute of play from Nick Suker. Suker’s goal put the game away and kept the Crusaders unbeaten through five games.

Following The Crusaders: Both matches this weekend will have live stats available through ValpoAthletics.com. Friday’s match will have live video for a fee through Tulsa’s website. Visit @VUMSO on Twitter to view comments and photos leading up to Friday night’s match. Over the course of the 2013 season, seven matches will have free live video on the Horizon League Network, including three matches at home.

Series Notes: Tulsa - Friday night’s match in Tulsa will mark the first meeting between the Crusaders and Golden Hurricane. Western Illinois - Sunday’s match will mark the 27th meeting between the Crusaders and Leathernecks. Western Illinois holds a 6-18-2 series advantage over Valpo. The two teams most recently played a season ago, with the Leathernecks taking a 1-0 victory.

Scouting the Opposition: Tulsa - The Golden Hurricane enter Friday night’s game ranked #12 in the nation.  Sitting at 4-1-1, the only loss suffered came at #6 Creighton. Cristian Mata has been the most dangerous player for the Golden Hurricane in 2013, scoring 5 goals and assisting on 3. Tulsa has a highly potent attack that ranks 7th in the country in total goals with 12, 17th in total assists with 11, and 19th in scoring offense with 2.17 goals per game. Western Illinois - The defending Summit League champions currently sit at 1-4-0 on the season. The Leathernecks also played in the Mike Gibbs Memorial Tournament, losing 2-1 to North Florida and beating Jacksonville 1-0. Husref Jupic and Diego Lopez lead the Leathernecks with two goals apiece.

Regionally Ranked: For the second consecutive week, the Crusaders are ranked #10 in the NSCAA Great Lakes region. Valpo last appeared in the region rankings in October of 2011; the year the team won the Horizon League title. The Great Lakes region is widely considered to be one of the toughest regions in college soccer.

Unbeaten Start: The Crusaders undefeated start to the 2013 season is the second best start in program history. This team’s 2-0-3 start is only second to the 2010 team that started 5-0-1.

Crusaders in League Play: Valpo currently sits at the top of the table in the Horizon League. The Crusaders were able to travel to Oakland and pick up an important league point on the road, earning a 1-1 draw against the Grizzlies. The Crusaders continue their quest for the Horizon League title on September 28th when the team travels to Wright State to take on the Raiders.

Extra Time: For the fourth time in five games this season, extra time would be necessary to decide the outcome of a match. So far this season, each Valpo game sent into extra time has ended in a draw. This would not be the case this past Friday night, however. After playing over 105 minutes, the Crusaders were able to find the back of goal in the 106th minute to defeat the Jaguars 2-1.

Club 500: In five games this season, the Crusaders have played 526 total minutes, which averages out to just over 15 extra minutes per game. Three Crusaders have eclipsed the individual 500 minute mark: Mitch Albrecht (523), Jesse Ortiz (505), and Zev Taublieb (504).

Suker Comes Up Big: So far this season, Nick Suker has two goals to his name - both have come in big moments of the game and have been game-winners. His first game-winner came against a Michigan State team ranked #24 at the time. Suker’s goal, assisted by Daniel Killen, came in the 79th minute of play and gave the Crusaders a 2-1 win over the Spartans. His second game-winner came this past Friday against IUPUI. With the game level at 1-1 late in extra time, Suker slotted a ball that was played in by Todd Vervynckt into the lower left corner of the goal. That goal ended the game at 2-1, giving the Crusaders their second win of the season.

On the Road Again: After a one game home stand, the Crusader men are once again back on the road. Having already spent weekends in Florida and Michigan, the Crusaders now head to Oklahoma for a game Friday night, then to Illinois on Sunday for an afternoon game. Valpo will only have 4 more home games this season, as the team is still scheduled to travel to Ohio, Wisconsin, and Kentucky.

Looking Ahead: The Crusaders continue league play next Saturday (Sept. 28) with a game at Wright State (1-2-0, 0-0-0 Horizon). Last season, the Crusaders were able to top the Raiders with a 2-1 score line. Valpo will then travel to Dayton for a Monday night game with the Flyers.

Champions in the Classroom: In 2012, Todd Vervynckt was selected to the Horizon All-Academic team, the CoSIDA Academic All-American Third team, and the All-District V first team. Vervynckt is in the Mechanical Engineering program at Valparaiso.